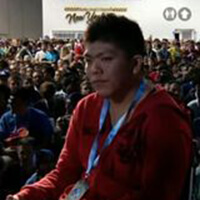 Ranked 2nd on the Japan Power Rankings and 11th on the Fall 2019 PGRU, Kameme is hailed as the best Mega Man player in the world with Wario as his secondary. He often teams up with smashers like Abadango, ANTi, Daiki, and Hikaru for ssb doubles events.