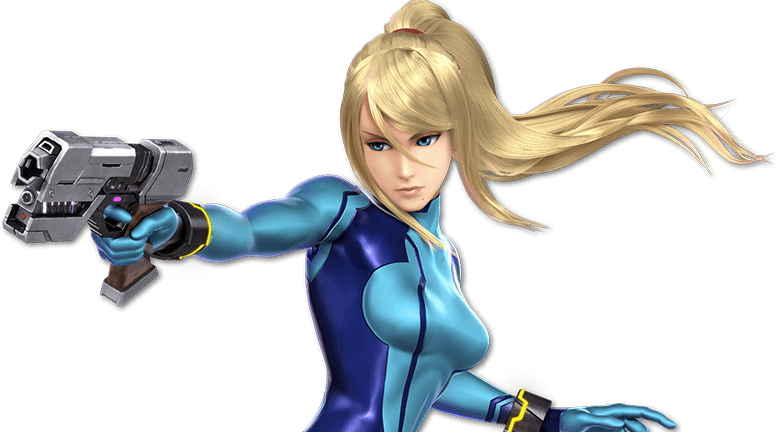 When Samus Aran takes off the Power Suit, she remains in her Zero Suit. In Metroid games, this outfit appears mostly during cutscenes. Zero Suit Samus is a much lighter and faster Smash fighter than Samus. She is good at aerial fights and can punish opponents with her strong special moves.Know more

The battle costume of Samus Aran allows her to fight evil Space Pirates (with their leader Ridley) and an immensely dangerous life form called Metroid. But there is a human being under the protective Power Suit. When Samus takes off her battle equipment, she remains in a comfortable Zero Suit — which perfectly highlights her human nature.

Usually, Samus has important missions to complete during the Metroid games, so the players see her mostly in her Power Suit. In fact, this image of a cosmic hero is a bit confusing. It was even surprising for the players to finish the first game of the series, Metroid (1986), and discover that the main hero is actually a girl — that was revealed only in the final scene.

For the first time, Samus wears the Zero Suit in the game Metroid: Zero Mission. The hero crashes onto the surface of a planet near the Space Pirate Mothership. Her Power Suit is broken, so Samus has to strip it off and remain in the Zero Suit. Vulnerable to attacks and having only a simple gun in her hands, she manages to traverse the ship and obtain even more power equipment - Legendary Power Suit.

It’s not common for space heroes such as Samus Aran to start their missions without their outfits. That’s why you can meet her Zero Suit form mostly in cutscenes and after defeating the main enemy. Quite often, players should fulfill certain circumstances for this, like completing a game for a specific time or with a specific difficulty level.

Other games where Samus appears in the Zero Suit include:

Samus Aran in the Power Suit is present in all Smash games. In the first one, players could see the girl without her helmet on the congratulation screen. In SSB Melee, you could get a trophy - Samus Unmasked.

The first proper appearance of Zero Suit Samus happened in the game Super Smash Bros. Brawl. You could get her (instead of the Power Suit form) by holding the shield button on the character selection screen, by quickly activating up and down taunts, or during Final Smash of Samus.

With a bit different design, Zero Suit Samus returns to Smash 4 ( for 3DS and Wii U). In that game, she is a standalone character.

Everyone is here — and this includes Zero Suit Samus. In SSBU, she has almost the same look as in SSB4. Her Final Smash has changed, and she becomes an unlockable character.

Naturally, Samus is lighter and faster without her battle costume. In the Zero Suit form, she is a lightweight fighter with excellent ground/air speed and a very high jump. Her abilities allow players to use the hit-and-run style during fighting matches.

Her aerial attacks are quite effective - it’s the main advantage of Zero Suit Samus in SSBU. Forward Air is a good combo starter. The ground game for this character is not very impressive, but Zero Suit Samus is still pretty good at grabs and throws (especially Up Throw). Speed and strong special moves allow Zero Suit Samus to punish the opponents very well.