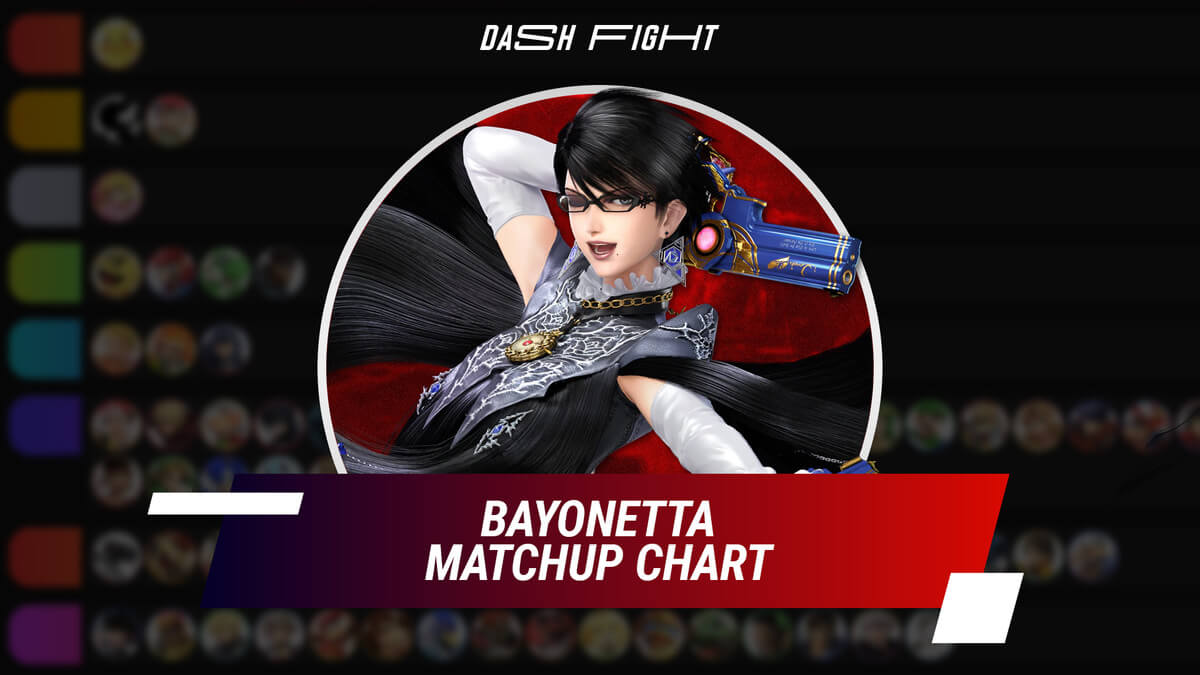 Nintendo / Sega
#Guide#Evergreen
Discover strengths and weaknesses of this powerful witch in matches against other SSBU characters!

Bayonetta is a unique fighter in the Super Smash Bros. Ultimate roster. She came from a much darker world than most of the Nintendo characters. This witch knows how to use deadly guns and defeat mystical opponents - do you like such style in the colorful and joyful fighting game?

Some players really like Bayonetta and use her quite a lot. Recently, we published a detailed guide on this character that explains her background and abilities in SSBU - check out Smash Ultimate: Bayonetta Guide - Combos and Moves.

In this article on DashFight, you’ll discover counters for this fighter. In what matches Bayoneta has advantages? Against which opponents she is rather weak?

Why do we need matchup charts?

There are two very different attitudes to probably any fighting game:

The first style may seem more joyful and lighthearted. In a way, it is so - you come to the game to have fun. On the other hand though, such players obviously limit their progress. They risk never discovering some tricks and never taste the sweet gaming success. Super Smash Bros. Ultimate is much more forgiving to this button-mashing-like playing than Street Fighter V or Tekken 7, and still, it gladly opens its depth for anyone who puts a bit more effort in the fighting joy.

The second style may seem more advanced with the potential power to make you a pro. On the other hand though, many players become bored to tears of such intense training and tired of the game before really starting winning.

As with many aspects of gaming (and even life), the best approach is somewhere in between. For most players, it’s better to keep the joyful spirit and still absorb tips and tricks, use various techniques to improve the playing skills but never overdo the learning process.

SSBU matchup charts are needed to get the general picture of advantages and disadvantages of your character. They deliver the general idea on where you can push harder and where you better be more careful. We don’t recommend taking the matchup charts for Super Smash Bros. Ultimate fighters too seriously - a lot depends on the personality of players and their skills.

The situation with SSBU Frame Data is very similar. You can get the general understanding of frames for each attack but do not calculate every move in fast-passing matches.

Many Super Smash Bros. Ultimate players consider Bayonetta a not-very-powerful character. You don’t meet very high levels of strength in Bayonetta matchups - not so many opponents are in the “Strong Against” group and the advantage is not super impressive.

Let's divide all the Super Smash Bros. Ultimate characters into categories of the Bayonetta MU Chart.

Bayonetta Matchup chart in a picture

Bayonetta is strong against

Bayonetta has slight advantage over

Bayonetta is even with

Bayonetta has slight disadvantage against

Bayonetta is week against

Each Bayonetta counter here has been placed according to the gradually increasing strength against the witch. So the power in one group becomes bigger in the end of the list / picture.

The matchup chart for Bayonetta in Super Smash Bros. Ultimate is based on the players’ votes, but it can be wrong for your personal experience. Don’t forget - in your game, your opinion is always in the first place.