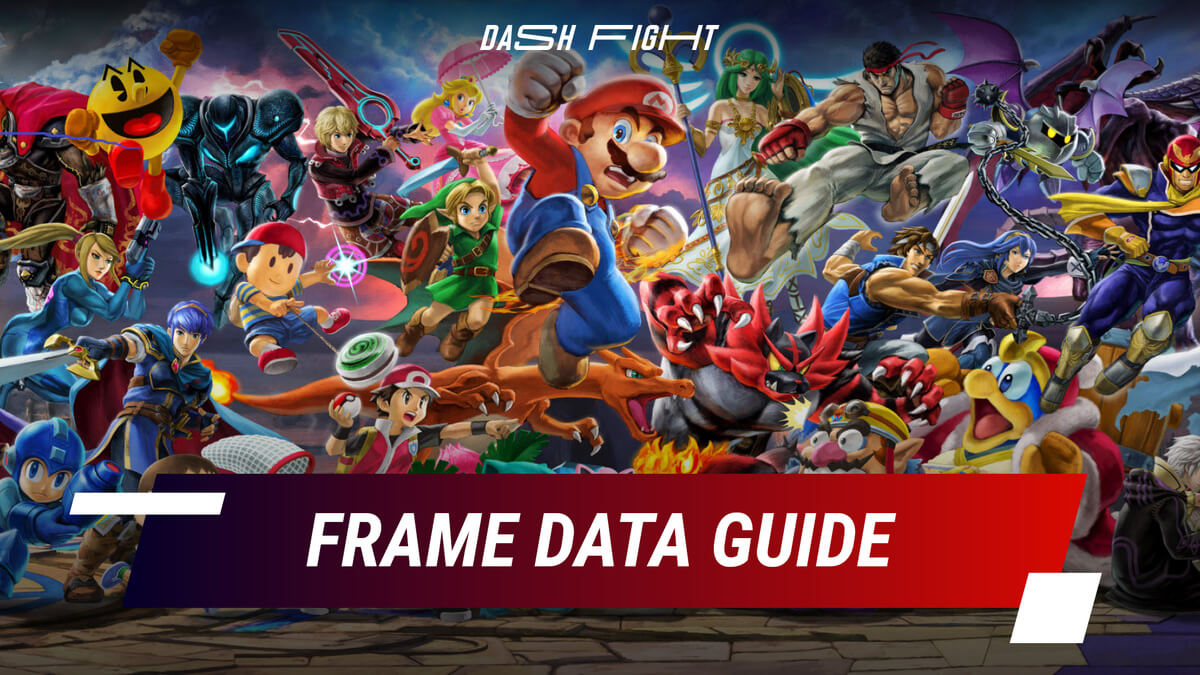 Nintendo
#Guide#Evergreen
Go deep into the game and develop a mathematical understanding of each attack for your character.

Guys, how enthusiastic you are about Super Smash Bros. Ultimate? How far would you like to go in this competitive fighting? If you prefer just having fun and don’t want to bother with tricky calculations - congratulations, you can return to the game and enjoy it without any Smash Ultimate Frame Data and explanations from this article! But if you are filled with the competitive spirit, want to win as many fights as possible, and even consider starting your SSBU esports career, then this guide on DashFight will be super helpful.

Here we talk about Frame Data. You can hear these words a lot, but what do they actually mean? And how to use Frame Data in your game?

This topic may seem to be quite difficult - this is an illusion. It is really difficult to implement your knowledge on SSBU Frame Data in practice, but it’s super easy to gain general understanding. So, here we go!

What is Frame Data in Super Smash Ultimate?

Each attack of the game characters continues for a specific amount of frames. This is a universal measure of time for performing your jabs, tilts, smashes, and in fact, everything else.

Information on numbers of frames for every attack of every character has been obtained from the game code, so this is precise data. In the community, such information is called Frame Data.

When you hear something like Smash Ultimate Banjo-Kazooie Frame Data, you know that it’s about frames for attacks of Banjo-Kazooie in SSBU (place any fighter here).

The game runs on the Nintendo Switch devices at 60 frames per second. If we have an attack that continues 54 frames, this means the character performs this attack almost one second.

Let’s go a bit deeper. Frame Data for each attack has three components:

How to practically use Frame Data in SSBU?

Here the fighting art starts. When you know Super Smash Ultimate Frame Data, you can better understand which of your attacks is effective in each moment of the fight.

For example, you take Sonic and play against Bowser. Your initial jab has three frames of the Startup period. The same attack of the Bowser takes 7 frames Startup. This means that if both activate their jabs simultaneously, Sonic hits first and cancels Bowser’s attack.

Of course, you can’t analyze Frame Data during the fight - the game is too fast-passing and unpredictable. It’s enough to start with a general understanding of Frame Data for your chosen fighter. Then start learning numbers for the most popular opponents. Probably, you will be interested in expanding your knowledge to all the Super Smash Bros. Ultimate roster.

Of course, professional players do not analyze either - their brains do this automatically, almost immediately. But this skill comes mostly with getting enough of the playing experience.

This one is a very good question with no universal answer. It depends on you! There are some people, who can remember numbers from first sight and then just use them in the game. It’s a rare thing to have such an ability. There are people who need to write down each number and then have this paper in front of their eyes during long hours of practice. Not so many people need such intense preparation!

For the most SSBU players, it would be enough to just inform yourself of numbers in Frame Data and develop the general understanding of attacks and shields of your character. Then practice and play with this understanding. Discover numbers of popular opponents and then feel how they affect the fights.

Is Frame Data an ultimate key to success?

No. Knowing frames of the attacks and moves of SSBU characters may become super helpful for your matches, but the game has been built on many more factors than only Frame Data.

For example, don’t forget about the distance between fighters. Proper spacing can strengthen your usage of Frame Data - attacks with slow Startup but big distance may be effective against those with quick Startup but small distance.

Super Smash Bros. Ultimate is quite chaotic, you can’t calculate everything here. And this is a great feature for a good fighting game (you can say the same about Tekken 7 and Street Fighter 5 as well).

Frame Data is rather an advanced technique, so for beginners, it would be better to start from the basics - check out our guide How to Play Super Smash Bros. Ultimate.