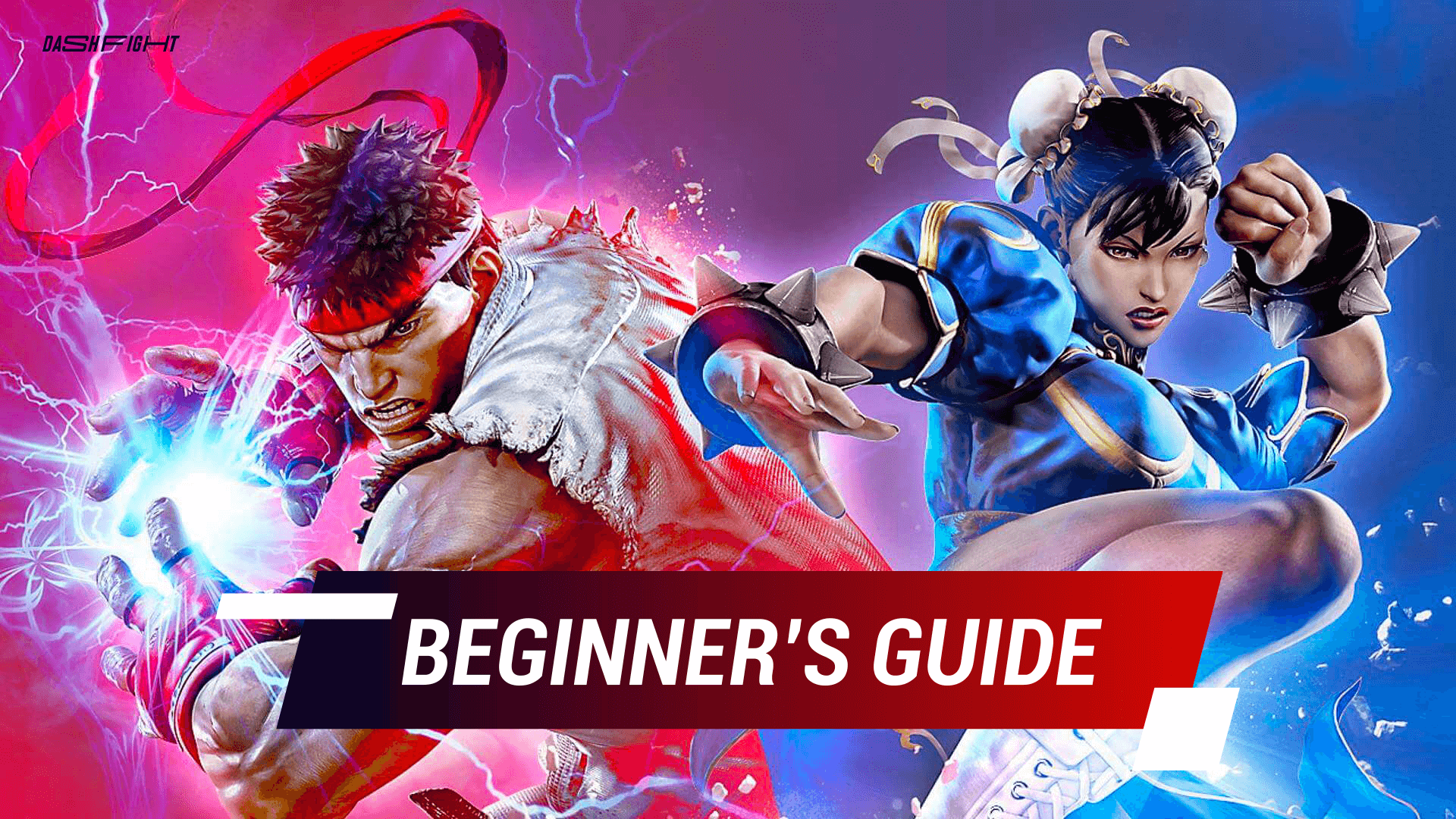 Modern gamers are lucky to have a huge variety of game titles on many devices. Even if you are a fan of a particular genre, you will have lots of huge Universes to choose from. Street Fighter is an amazing franchise - it is here from the very dawn of the video games era, and even with some other very good fighting games, many players pick up Street Fighter V and invest hundreds of hours in mastering powerful fighting tricks.

The initial steps in this game are quite significant. To save your time (and nerves) and make those hundreds of hours more joyful and efficient, check out this Street Fighter V guide for beginners.

It’s not surprising to mention the dawn of gaming whilst talking about Street Fighter. Ryu and Sagat fought each other long before the Internet and the first PlayStation. In the past, most players had to visit arcades for a chance to prove their skills in fighting matches. Street Fighter is one of the longest and the most successful game series, and the fifth installment is its decent continuation.

You also can meet SF characters in such games:

If you are interested in the fighting games history, check out our article Evolution of Street Fighter: Core Games. Of course, you don’t need to look to the past if you want to enjoy the newest game (so far) - Street Fighter 5.

From where to start?

You have quite a few choices here, so it is easier to say what not to do from the very beginning. Don’t rush into online matches and especially ranked. You will meet their serious players, able to smash your enthusiasm. Take your time to learn the basics.

In fact, it would be better to start Street Fighter V with… setting your goals. Ok, you don’t really need to decide something specific. Just decide on your “league”:

For all the beginners in Street Fighter games, it would be wise to finish the Tutorial. In fact, the game starts with it, and then you can play it again. The Tutorial explains the basic movements and attacks. Of course, knowing them is not the same as using them in super fast fights. But without this knowledge, you will rather mash buttons and not play effectively.

Also, we invite newcomers to check out our article Street Fighter 5: Tips for Beginners.

One of the best Street Fighter tips is to choose your hero first. Usually, professional players have one fighter they practice with. Time is needed to master many tricks and specific features of Street Fighter 5 characters, so don’t waste it on those who you don’t like from the very beginning.

Street Fighter V: Champion Edition offers 40 characters. The developers are planning to add five more in 2020, so the total number will be 45 fighters.

Each of them is a personality with a story and different values of:

Check out these characteristics but pay attention mostly to the fighter - you should like it visually (and beyond) to build an emotional connection and spend many hours on the fighting stages.

To get to know the fighter of your choice better, play through their part of the Character Story Mode. You will find out their background and what motivates them to actually fight. The stories have been made in the form of a series of fights and cutscenes. It’s a very good way to learn how to play Street Fighter V - both casual and hardcore payers will be interested in the stories.

The Cinematic Story Expansion is also worth completing. It’s called A Shadow Falls. You’ll meet here many SFV fighters - maybe they will make you change your mind on the primary character. At least, you will know your future opponents better, and this is a very significant step for enthusiastic players.

Those who dream about an esports career in Street Fighter or just consider this possibility should take their time and play throughout all the character stories. Understanding your opponents is a crucial thing in a winning strategy.

Like most of the fighting games, Street Fighter 5 opens almost endless opportunities for skills improvement. And the game does quite a good job for creating a nice environment for beginners - everything you need for playing better is already in the game.

Here you have a chance to learn combos in the Trials section. Just complete challenges for each character and you will know them and the whole game much better. In the Demonstration section, you’ll find lots of helpful content. It is divided by the level of players: beginners, intermediate, experts.

It doesn’t offer the adrenaline of fights but here you can work on various aspects of the game. Training matches have lots of customization options and various metrics.

Here, players can train their durability. You will face many opponents in a row with the possibility to power up before harder fights. Choose here from easy (10), normal (30), hard (50), or hell (100) battles.

Hardcore gamers can’t miss these modes. They are optional but highly recommended for casual players. Read more in the guide Various modes of Street Fighter V.

All those stories and training are just preparation for the real fun - multiplayer matches. It’s nice to enjoy them and get some helpful training on the way, and still, Street Fighter 5 players spend most of the playing time in online fights.

Beginners should still be careful here. The Ranked Matches can be very stressful because people come here with serious intentions to win and improve their online rank. A better way to feel the excitement of multiplayer is to join Casual Matches. Players mostly practice and have fun here, so you can do the same.

For fighting on your own terms, create your Battle Lounge, and invite people to join. It is possible to change the time of battles, the number of rounds, and set some special conditions.

In the game, you can look at profiles of other players and even watch their matches. Visit the section Capcom Fighters Network for this.

So, what's about the actual fighting techniques?

Before delving into tricky combos and moves, beginners should learn properly the basic attacks. Of course, the in-game tutorial explains a lot, and still, having a fast reminder and clear explanation may be a very good idea.

Each character in Street Fighter V can perform:

The fighters attack with their hands and feets, so their attacks are:

Light punches and kicks (jabs) are fast but not really powerful. You can’t expect to win only with them, but these attacks can be very helpful in some situations. For example, when you need to stop the series of your opponent’s attacks.

Medium punches (hits) are quite effective in the close range. Medium kicks are better for the medium range, when you prefer to keep a distance.

Hard punches and kicks (wallops) are slow but very effective. Your character becomes quite vulnerable when the opponent blocks wallops.

All the attacks can be combined with movements. Jumping (D-Pad up) and crouching (D-Pad down) change the effects of the attacks. You can also combine normal attacks with direction buttons - backward-forward.

Everything is quite straightforward with movements (in fact, like in most of the fighting games, such as Super Smash Bros. Ultimate). Your character can walk, dash, and jump.

Press D-Pad (or the left stick) right or left. While walking, you can do any action very fast: attack, block, jump, or dash.

To move much faster, make a double-tap right or left. The fighter will dash to a short distance and they will be very vulnerable during this period, so use dashing cautiously. Dashing is good for escaping attacks.

Press D-Pad (or the analog stick) up, up-forward, or up-backward. These movements are very hard for beginners - it’s super easy to jump in Street Fighter 5, but we talk about jumping effectively. Newcomers tend to jump a lot. Their opponents see this intention very well and have enough time to do something in response. It would be better to jump less at the start of your SFV journey and only with a good experience to start using jumps more.

Another action in the game is absolutely crucial - blocking attacks, or guard.

To prevent taking damage, press backward - this is called a High Guard, which protects from most attacks except low ones (when your opponent is crouching). There also is a Low Guard, which protects from everything except overhead attacks. A good way to deal damage to an opponent with Low Guard is to perform Cross-Up - the combination of jump + light/medium kick hits from behind.

You can press two attack buttons at the same time or a combination of buttons and perform some unique actions.

Activate them with the light punch and light kick buttons. Your fighter should stay close to the opponent to throw them and deal damage. Combine this with the back button and you throw the opponent backward. It’s hard to see a throw coming, but you can guess such an action of your opponent and prevent it by performing your throw at the same time.

Each SFV character can make a unique attack. All of them can be activated by pressing special combinations of buttons. The game contains a lot of special attacks, depending on the character - for example, hadoken (a fireball) or shoryuken (a jumping uppercut).

Usually, after a normal attack your character should recover for performing the next one. You can act fast and cancel the recovery and activate a special move immediately. This action is called a combo. Do it just after the first attack hits.

It’s ok to see your character on the floor in Street Fighter V. This happens after throws, hard kicks from the crouching position, and some special moves. To stand up, you can:

Let’s take a closer look at this topic in the guide Street Fighter V: Knockdowns.

When an opponent performs a special move (such as shoryuken) and misses, they become very vulnerable - do a hard attack and this will be a Crush Counter. It’s strong and activates a sequence of attacks that deal even bigger damage.

Crush Counter in Street Fighter is quite an advanced technique, it asks for a very good understanding of your opponents. We will talk about Crush Counters in more detail on DashFight later.

Most of the beginners prefer playing Street Fighter V with a normal console controller. Even if you play on a PC, it’s better to use a gamepad.

But how to control movements? You can do it with the D-Pad or left stick. Many fighting gamers recommend D-Pad. With it, you have a better control on the situation.

Special fightpads and fighting sticks may be a good idea. But you better be sure you really like SFV or other fighting games  (Tekken 7, for example) before investing in such hardware.

The original release of Street Fighter V was in 2016. Then, we had two updates: the Arcade Edition in 2018 and the Champion Edition in 2020. Both added new characters and brought nice improvements.

For now, you have two choices:

Street Fighter V is super deep! You may find yourself starting fights again and again, experimenting a lot, and trying to improve your skills even in very small details. DashFight will provide you with lots of useful info, be it Street Fighter 5 guides, tournament reviews, or all sorts of news on the community life.