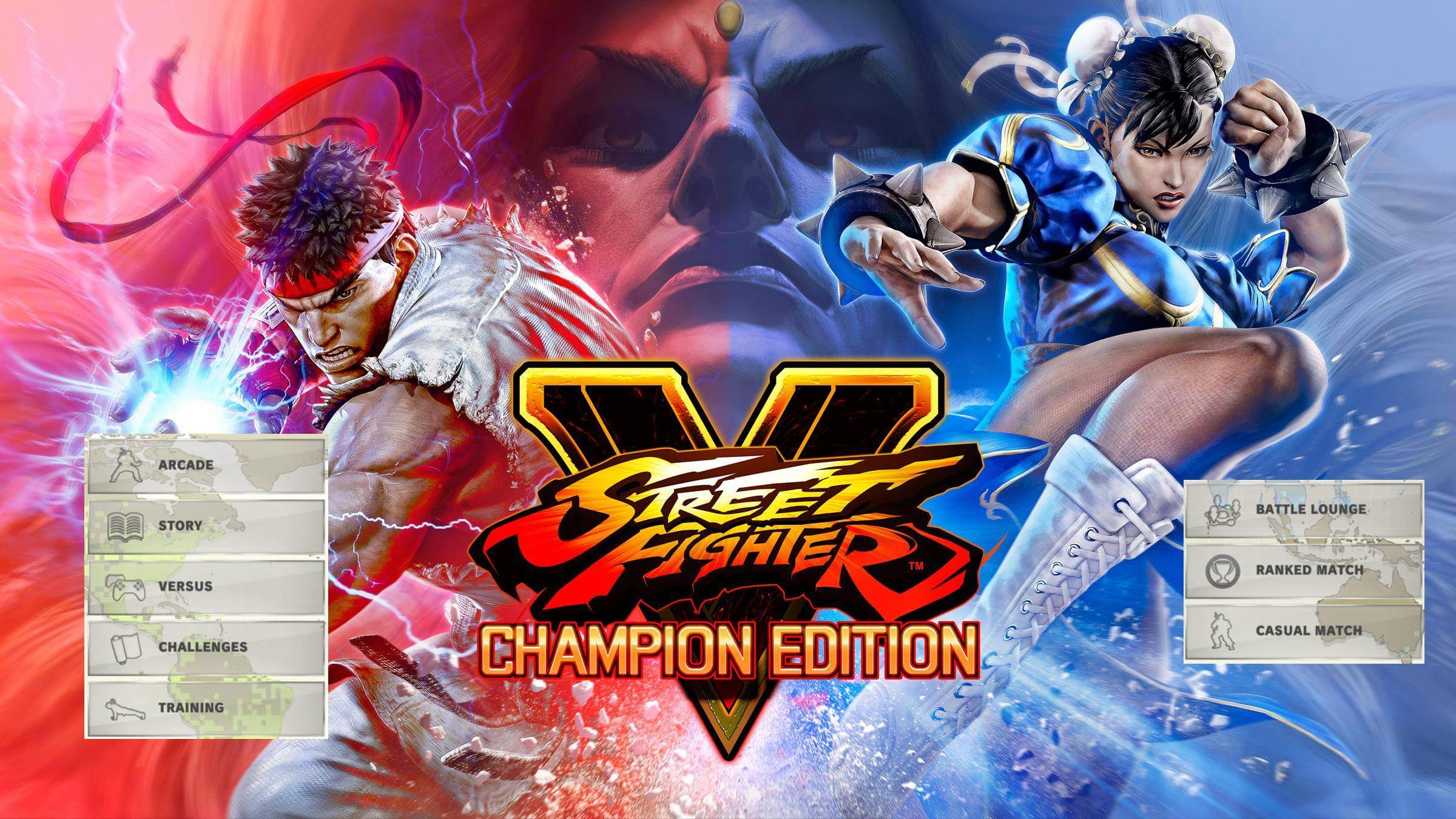 Capcom
Where to start your playing experience in SF5? Is there anything exciting you are missing among lots of game modes?

Almost every big game is like a huge new world - players can get lost in them for countless hours. Street Fighter V is one of such amazing experiences. You can have so much fun here in so many game modes.

In fact, the variety of those modes may become even confusing for newcomers to the fighting games genre. It’s not the same as starting a story-driven game (press Start and follow the plot). A guide on Street Fighter 5 modes might be super helpful for making your playing time even more joyful and boosting your progress as a fighting gamer. And here this SF5 guide is - you are already reading it on DashFight!

Where to start in Street Fighter 5?

At the first sight, the game menu of Street Fighter V may seem a bit complicated - especially for beginners. So, where to go for your first fights?

The initial steps in any game are super significant, and especially in a so complicated one as SF5. If you jump into the action and enjoy it from the very beginning, this will strongly motivate you to move forward, discover other game layers, train hard, and get many victories.

As we recommended in the article about Tekken 7 modes, it would be wise to not enter the online multiplayer of Street Fighter V in your very first playing session (especially into Ranked Matches). People come here to win, and most of them have quite an experience - beginners risk to get destroyed with their fighting spirit smashed.

If you only start playing Street Fighter 5, here are two great destinations for you:

Here, you’ll find classic scenarios from all core games of the Street Fighter series. You choose your fighter and then face a series of opponents. Defeat them all and try to make a high score record.

The SF5 Arcade Mode is a lot of fun even for beginners. It is not too challenging and at least a few starting opponents can be defeated even if you just mash buttons and try out different abilities of your character.

At the same time, players in SF5 Arcade soon reach the point, when they are stopped by their limited skills. This Street Fighter mode gives motivation to learn the game.

Of course, the Arcade fights are super fun for experienced players as well. Just change the difficulty and enjoy much more powerful opponents!

This is a chance to get to know the game and its characters much better. In General Story, players get the feeling of being in the SF world and controlling various characters. Again, everything is rather easy at the beginning but becomes a bit harder in the end - to get motivated to visit other game modes of SFV and work on your skills.

The General Story of SFV is named A Shadow Falls. The story itself is pretty interesting. The evil organization Shadaloo has created a destructive weapon, the Black Moon. M. Bison traditionally searches for world domination. And the same traditionally, brave SF5 heroes do everything they can to stop the Dictator from terrorizing the whole planet.

How to Unlock SF5 Story Mode?

If you’ve purchased the game (for example, SFV: Arcade Edition) and don’t see the General Sory in the Story Mode menu (it's inactive), don’t worry, as A Shadow Falls has to be installed separately. The developers added it to the game after the release, so it’s available as a free DLC. Look for it on Steam or PS Store, install, and then enjoy it in the game — the menu icon will become active automatically.

Character Story consists of a few episodes that show the background of each fighter. These stories are not very informative, but they allow feeling the spirit of the game and probably even making a decision on your main in the future. In this mode, you start leveling up the game fighters and earn Fight Money — later, you can use them to unlock all the other Street Fighter characters.

Don’t take the Character Episodes too seriously gameplay-wise. Real powers of those fighters start to bloom in more challenging fights. You just can not feel their full potential here. It is especially true for difficult characters, such as Seth or Menat. You need to practice a lot to learn their moves and attacks.

Break your limits in Street Fighter 5!

In those two modes, the game opens the players a kind of abyss - but without scaring them from fighting. You can clearly feel that there is much more than button mashing, and you can play substantially better. If so, then the job of attracting your attention is done, and you definitely need modes for improving your skills.

You already played through it after starting the game for the first time. And you can repeat this mode any time from the Story section. It will become boring very soon, so visit it only if you need to remember the basics.

The whole tutorial is a friendly fight between young Ryu and Ken. In fact, they do not actually fight but remind the player how to move, perform various attacks, and use other basic options. This mode is very short and rather technical — to introduce the game to newcomers.

Or you can check out our Street Fighter guide for beginners - it gives quite a lot of interesting basic game info.

You better visit this section first before Training (even if the latter seems to be more appealing). Here, you can get clear instructions that demonstrate the abilities of your character.

Start with Trial. The system gives you some tasks (10 for each character) - you should perform specific attacks and link them into effective combos.

Trials of SFV are a great way to expand your fighting arsenal. They might seem challenging for beginners, but they are essential to stepping beyond landing separate attacks. Street Fighter has lots of tricks, and it would be difficult to discover them on your own. Use the Trials as your guide to the game depths.

Of course, The game has much more effective mechanics than those explained in Trials. But after practicing those combos, you will be skilled enough to coin your own ideas — in the Training Mode.

The Demonstrations are more informative. Here, you watch various attacks of the characters - but you can’t train, only watch. That might not seem very effective, but still, Demonstrations play an introductory role and explain what those characters are capable of. It might be a good idea to watch them again and again — while playing, you might develop specific patterns in your behavior and forget other important stuff. SFV Demonstrations will remind you of other options and prevent you from becoming predictable.

Missions give various tasks and reward players for completing them (it’s not a mode strictly speaking). It’s a great source of fight money and additional motivation to use your new skills in practice. Visit this section even if you have successfully finished your beginner stage. The tasks might be about performing specific moves or trying out different sections of the game. Some are as easy as pie and have been created mostly to show you different options of Street Fighter V. Other missions are pretty challenging, and you can use them as new goals in your fighting practice.

Extra Battle is an interesting challenge, where you face a specific opponent. It’s a nice mode for players of any level. The game rotates Extra Battle tasks, so you should visit this place regularly to check what’s new here. Pay attention to the difficulty level — some of the Battles are totally not for beginners. Still, they might show you the level to strive for. Also, notice the rewards and participation fee. Sometimes, joining expensive Extra Battles might come across with your current game plans (earn FM for costumes, for example).

Visit Survival Mode after practicing in Trials. Defeat here a series of opponents to unlock costume colors and earn Fight Money. And of course, this SF5 game mode is also just fun. There is no need to set some additional goals to enjoy it!

In SFV Survival, your character does not restore health while moving to new opponents. This feature forces players to be more careful during fights and not risk unnecessarily. Difficulty levels of the Survival fights mean different numbers of opponents in one run.

This mode requires wise item management. You will have a chance to use different power-ups in between matches. Some of them give additional strength while others restore health. To make the process tricky, you have limited resources for those items.

Yes, this is a place for training (obviously), but for beginners, it may be a bit… boring. You have full control over your opponent - no challenge involved. Just practice attacks and moves, work on various tricks, and improve each aspect of your fighting style.

It’s a place you should visit a lot while playing Street Fighter V. But probably you could start training here after learning some attacks in the Trials - to polish your new skills.

In the menu, you can choose the move list and then practice each of them. Also, movesets of characters are explained in many SFV guides on DashFight. For example, check out our posts on:

“And when, when can I start multiplayer fights?”

Online multiplayer modes are primary in most modern fighting games (including Super Smash Bros. Ultimate). You compete with real people here and have the most difficult challenges and the most glorious victories here.

After proper acknowledgment with the game and training your skills beyond button-mashing, visit the Casual Matches. Don’t postpone this experience for too long - fights here are not that tough. Players do want to win, but still, they are more relaxed than in the Ranked Matches and in the mood to experiment and have fun.

These multiplayer fights give a great opportunity for training. Real opponents are always more unpredictable than AI.

It’s a destination for serious gamers. Fight in this mode only after proper preparation! Here, you earn or lose League Points (LP) that affects your Street Fighter Online Ranking.

In this SFV mode, you can compete with another player or with a CPU. It offers a few interesting types of matches, including even team fights.

And now, we are ready to give you arguably the best advice on game modes - enjoy the game and choose any mode that makes you happy. No one pushes you to play the Ranked Matches and fight for a better rank. And no one stops you from skipping all the preparations and jumping directly into the whirl of SF5 action. This game is a place to have fun (in many meanings), so just enjoy it! And guides on DashFight are always here to help you overcome any obstacles and inconveniences.