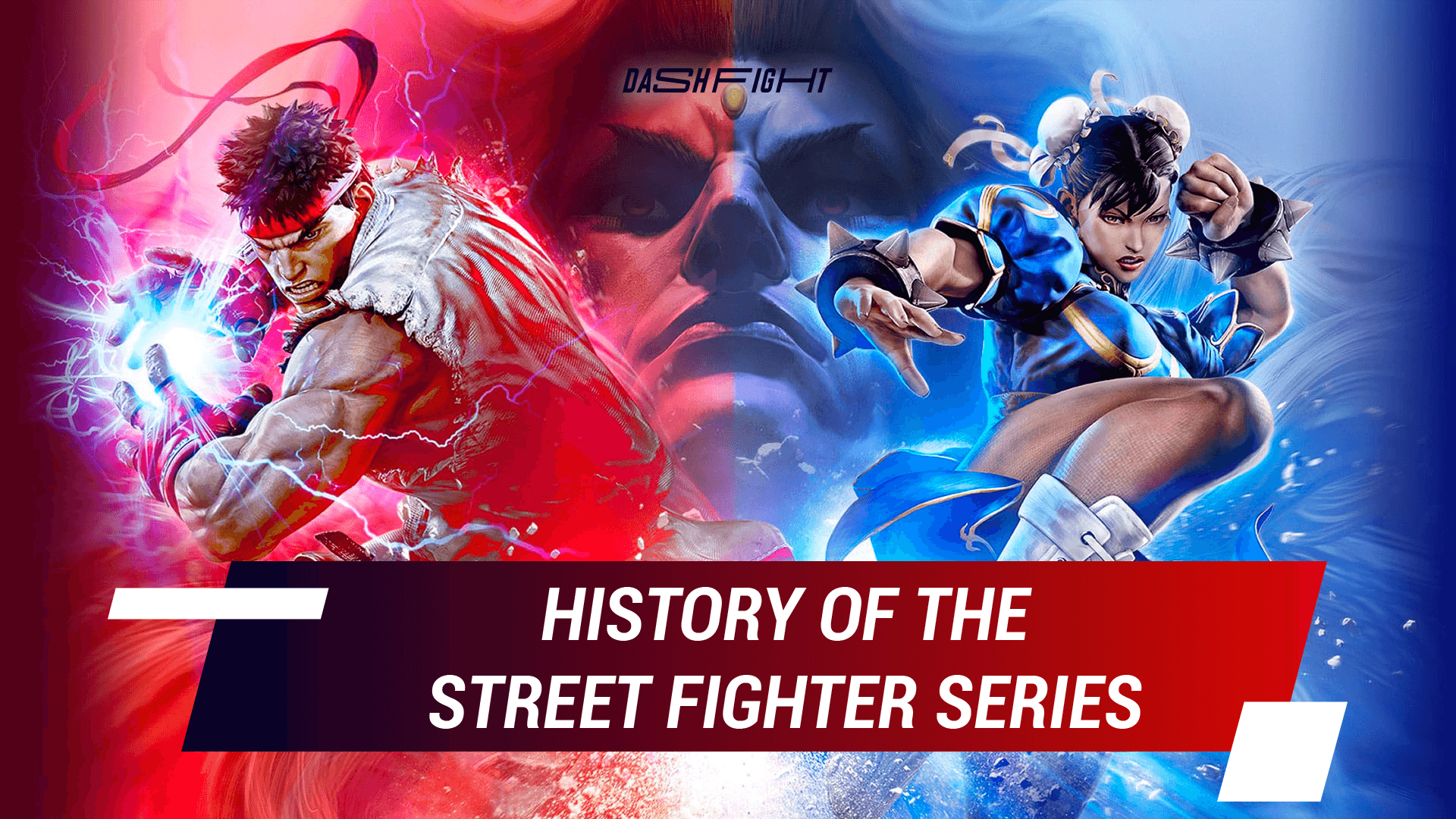 It seems like Street Fighter games are here since the dawn of time (ok, since the dawn of the game industry). Even our ancestors went to their ancient arcades to improve their fighting skills and beat those impudent competitors. Or that wasn’t so long ago?

The Street Fighter franchise has defined the high standards of the fighting games genre at the end of the 1980s. Since then, we have the possibility to enjoy many other great games (such as Tekken, for example), but SF always has its unique atmosphere and always delivers players that specific visual style and the overall feeling of this particular virtual fighting.

Guys, DashFight invites you to a short journey to the past - not too far, we don’t need to pack our suitcases. Let’s remember all the (awesome) games of the Street Fighter series and follow their evolution from old arcades to super modern gaming technologies.

A similar journey for Nintendo fighters is also possible - with the article Ultimate Story of the Super Smash Bros. Series.

How many Street Fighter games are there?

The answer depends on how you count. There are only five core games, but each of them has quite a few special editions - improved and expanded versions. There are standalone series Street Fighter Alpha and Street Fighter EX. And there are a lot of spin-offs and crossovers.

In this article, we concentrate on the history of core games:

The legend entered the gaming multiverse with a success but without an extraordinary sensation. That was a very good fighting game with some very clever ideas, which sprouted later in Street Fighter many modern players know and love. Still, the original game lacks depth and its replay value is not very high - after discovering all the secrets and experiencing all the features, players can freely move to other arcade machines.

Perhaps, this kind of criticism is possible because the following Street Fighter games have much better gameplay. As for a game from 1987, Street Fighter 1 is quite a solid product - and a nice entertainment for fighting gamers.

The game introduced Ryu to the world. He is a young Japanese martial artist, who competes at an international tournament. In the single-player mode, Ryu meets 10 other fighters:

In the two-player mode, the second one controls Ken from the USA, a friend and rival of Ryu. If Ken wins, he can become the main hero of the following adventure.

So, the original Street Fighter game has 12 characters overall - 2 playable and 10 opponents.

One very interesting feature of this game is secret special attacks: Hadouken (Fire Ball), Shoryuken (Dragon Punch), and Tatsumaki Senpu Kyaku (Hurricane Kick). Unlike the following installments, the first one gives no instructions on how to use them, so players should discover special attacks while exploring the possibility of fighters.

The controlling of the first Street Fighter has become universal for all the other games: six buttons for Light / Medium / Heavy Punches and Kicks. The joystick can move in eight directions and these movements can be combined with attacks.

The continuation was much better than the beginning. Capcom took the original formula and added a lot of new components to it. The best among them are many new characters with individual fighting styles and the introduction of combo attacks.

For the first time, players could choose their fighter - thus matches in Street Fighter II became much more interesting.

Combos are sequences of attacks that cannot be blocked if you press the buttons in the right moments. They were invented accidentally but became so popular among players that later they were integrated into  many other fighting games.

The main character of Street Fighter 2 is Ryu. Again, the guy joins an international martial arts tournament and faces a series of opponents. Ken is here too, as well as Sagat. The rest 9 fighters are new to the series - and they remain here for the following installments:

The second Street Fighter game was very successful, so the company released quite a few versions of it. That’s why you can often see them all combined under the name Street Fighter II series.

Many of these versions are ports to other devices - for making the fighting experience available for an even wider audience of players.

Each fresh update introduces some new features and additional fighters. Ultra Street Fighter II: The Final Challengers was released in 2017 for Nintendo Switch and contains 20 characters.

The financial success of Street Fighter 2 is super impressive! All the versions brought the company around $10 billion.

After the release of the second game, Capcom created SF Alpha that returns a bit in the timeline - its events happen in between Street Fighter 1 and 2. Then, the developers decided to continue the core series.

The third game is the first one with the parrying ability - an effective way to avoid dangerous attacks. Also, the players can use Super Art, various special moves.

In this installment, you meet Ryu and Ken again but all the other characters are new. They are:

Street Fighter III was released in the period when the whole gaming world became obsessed with 3D graphics. Still, the company decided to keep their fighting series 2D - reportedly because of the lack of proper technologies.

Street Fighter III: New Generation has nice visuals and feels like a classic SF game, but some players were disappointed by its too traditional attitude. This is a good but not innovative game. Some critics mention poor single-player experience.

Street Fighter 3 was released for home consoles only once - Street Fighter III: Double Impact for the Sega Dreamcast. It contains the original version and 2nd Impact.

Capcom took 11 (!) years to release the next game after Street Fighter III - this is the biggest gap for the series. And the developers used this time effectively! They returned to the roots and built upon them something fresh and still quite traditional.

One of the most obvious improvements in Street Fighter IV is its gorgeous graphics. It is still 2D fighting but with 3D character models. The stages are very beautiful - colorful and filled with an authentic atmosphere.

The playing process feels a lot like SF2, and considering the great success of that installment, this is an achievement of the development team.

Street Fighter 4 introduced a few interesting mechanics. For example, Focus Attacks that allow cancellation of an opponent attack and launch a counterattack. Or Ultra Combo, a very powerful series of various hits that deal significant damage.

For the first time, players can discover backstories of the fighters through special animated videos. The idea is great, but its implementation could be much better - some players think that the cutscenes say nothing and that in-engine footage would be prettier than the anime style.

So, the arcade version of Street Fighter IV has 19 characters. Playable among them are 17:

In addition, there are 2 computer-controlled guys:

The console version of SFIV has a bigger roster - 6 more to the mentioned:

The final (for now) iteration has 44 characters.

The initial release in 2016 was disastrous. The core gameplay and some new features were all right, but the company hurried to deliver Street Fighter V before the Capcom Pro Tour, so they cut lots of content and published an unfinished product.

Still, that was a very good game for hardcore competitive players. Only newcomers to the series and casual gamers felt forgotten and abandoned. Street Fighter V had sparse single-player content, a limited number of characters, and even issues with the servers.

In the gameplay, SFV got one new feature - V-Gauge. When fighters take damage, use V-Skills, or perform Crash Counter, they fill the special energy bar and then can use quite powerful attacks V-Reversals or V-Triggers.

To correct their mistakes, the developers released additional content through game updates. Players got the story mode A Shadow Falls and short stories that explained the background of each character - with the proper art style this time.

A significantly improved version of the game, Street Fighter V: Arcade Edition, was released in 2018. It has new game modes: Arcade, where you can play visually improved copies of all the core SF arcade games, and Extra Battle Mode with special challenges.

For now, SFV: Arcade Edition is the basic version. It comes with the 16 original characters and also has 12 fighters from Season 1 and 2 - among them, one absolutely new, one from another franchise, and three become playable for the first time:

In February 2020, Capcom released an even better version of the game - Street Fighter V: Champion Edition. It brings some changes to the gameplay and lots of additional content, including 12 fighters from the Season 3 and 4 - among them, three new and one from another franchise:

Even the catastrophe of the initial release did not prevent Street Fighter 5 from becoming a commercially successful game. As for May 2020, Capcom sold around 4.5 Ь copies.

Modern gamers can choose Street Fighter V: Champion Edition as the current culmination of the whole series. It combines excellent graphics and (almost) perfect fighting gameplay. This version is good for both beginners and enthusiastic fighters!

Street Fighter V is a popular esports discipline, and we at DashFight share all sorts of news from this area. Follow us on Facebook and Twitter to not miss anything interesting on the game and on the esports tournaments. Join our Discord server!