All Tekken Games Ranked: from Good to the Best 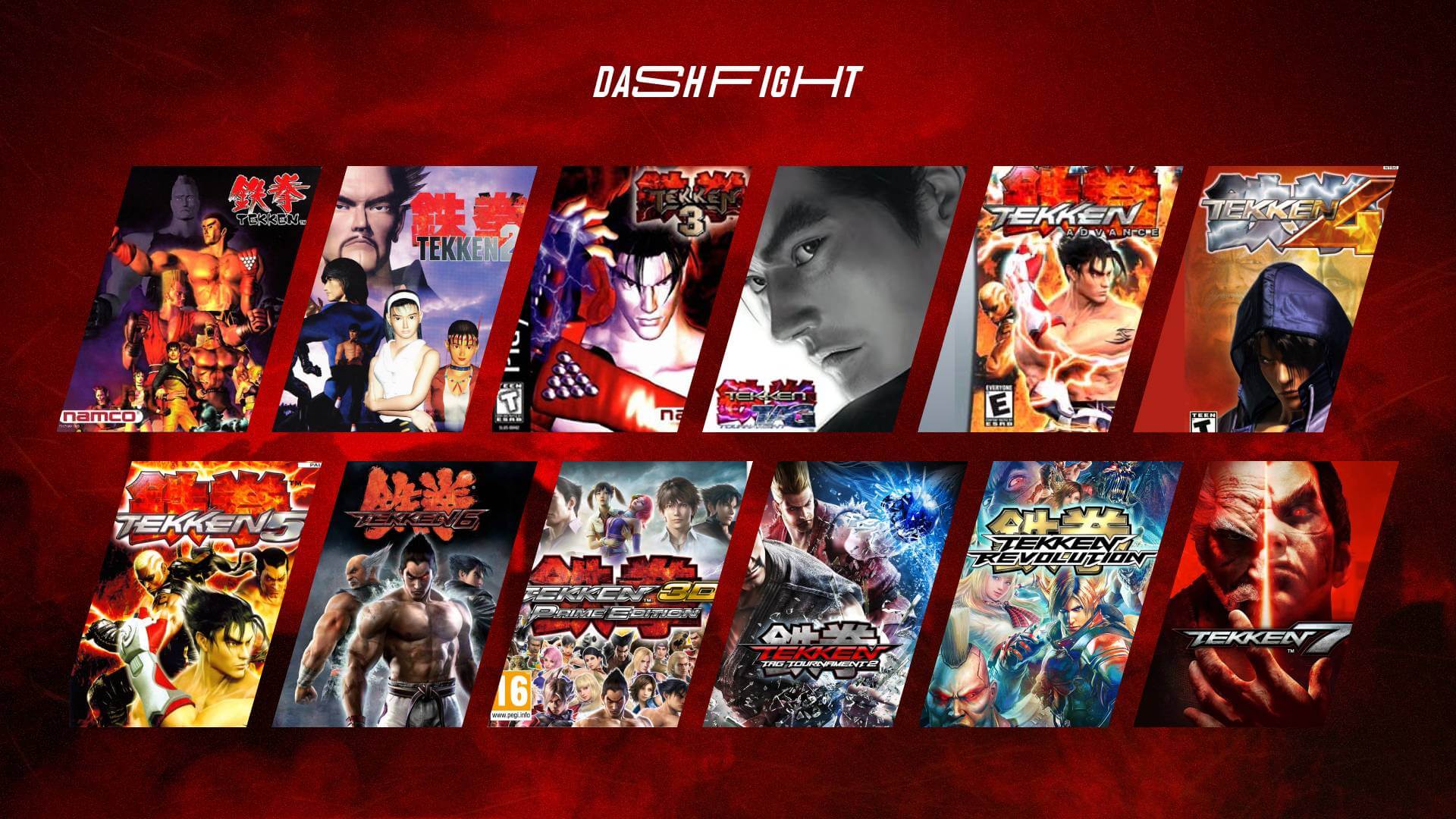 Bandai Namco
There are no bad fighting titles in this franchise

With a huge variety of games out there, it would be wise to choose only the best ones for your playing time. Did you ever wonder, which is the best Tekken game? Here is the list of all games in this iconic fighting series, ranked by DashFight.

Of course, this Tekken games list is not an ultimate opinion. We’ve reasoned why this game is here and that one is there - and it’s ok to disagree with us. It would be great to get your thoughts on the best Tekken games on Facebook and Twitter!

Unlike the article A Story of Success: How Tekken Burst into the Industry, this list of Tekken games ranked includes also some spin-offs and one standalone series, not only the core Tekken games.

In 2013, Namco Bandai Games released the first free-to-play title in this fighting series. On the one hand, it was a pretty good product. The developers put effort into bringing Tekken to a wider audience, but the free-to-play nature dictated its terms:

Still, the game is not bad - it’s ok. It offers quite enough to have fun in fighting and become interested in the propper Tekken series.

Tekken Revolution was available on the PlayStation 3, but the company closed the project in 2017.

This is the first-ever Tekken game, and it is quite a powerful initial step for the franchise. Fresh fighting techniques, unusual characters, and very decent graphics allowed the game to stand out from the crowd of competitors.

Very soon, the developers made many other great steps and improved the Tekken recipe immensely. In comparison to other games of the same era, first Tekken offers a blank experience and rather poor in-game balance.

Tekken 1 was released for the original PlayStation in 1995.

What about playing a Tekken game on the Nintendo 3DS? This game is your choice for this experience.

It has lots of positive aspects. As for a handheld game, Tekken 3D Prime Edition looks very good. The images are beautiful and even the 3D feature works properly. Players get a lot of fighters and proper fighting mechanics of other titles from this Tekken game list.

The negative aspects though are also quite significant. The lack of game modes and customization options turn Tekken 3D Prime Edition into a good choice for playing fighting with a friend - who also has the 3DS. For a story, offline solo mode, and other Tekken fun, it would be better to skip this installment. Tekken 3D Prime Edition was released in 2012 and it’s based on Tekken 6.

This is another portable Tekken. In fact, this game was the first released for a handheld console. In 2001, owners of the GameBoy Advance got a very good fighting game in their library.

Tekken Advance is very simplified - from the visuals to mechanics. The developers did so because of the GBA limitations. But the general experience is pretty good. Tekken Advance is based on Tekken 3, so it is definitely one of the best Tekken video games. Even if it is rather outdated.

The developers were quite innovative with this one. For the first time, they released the core Tekken game not on the original PlayStation, so they tried to use the new power in their hands to the max. Probably, Namco was too innovative with the possibilities of the PlayStation 2 in 2002.

The opinions on this game are controversial. Tekken 4 has a bigger focus on the story, and it seems like the fighting games community doesn’t treasure such an approach. Introduction of the terrain also was too brave - one player could get an unfair advantage. And with all these new features, players complained about a lack of progress in fighting mechanics in comparison to Tekken 3.

Tekken 4 looks beautiful, it has a lot of characters, and the story is still very good among all Tekken games.

In the stand-alone series Tekken Tag Tournament, players can choose two characters for a fight and change them at any time. It’s a good addition to the basic gameplay, but in many other aspects, this is a traditional Tekken game.

Tekken Tag Tournament 2 made a lot of things right. It was released in 2012 for the PlayStation 3, Xbox 360, and even Wii U consoles (a nice competitor for Super Smash Bros.). The game has lots of modes and internal possibilities, and it is great for experienced fighting gamers. Still, this is not the best Tekken to start with. It seems like the game doesn’t care for newcomers, so the accessibility feature is on a very low level here.

Many gameplay features came to Tekken Tag Tournament 2 from Tekken 6.

Be the first to get the latest TEKKEN 7 news and updates!

In our list of Tekken games, we enter the stage of exceptional masterpieces. It is hard to find imperfections in them - they all are great, but some among them are slightly closer to the abstract perfection.

At this point in the franchise development, the story becomes almost ununderstandable, and that’s great, because you can concentrate on the main thing, which is fighting itself. Players have lots of characters and a very beautiful visual style. An exceptional variety of modes and character customizations promises a lot of fun.

Tekken 6 loses in technical comparison with other fighting games of the same generation (2009 - PS3 / Xbox 360). The developers were more motivated to deliver a Tekken experience than to make the fights more appealing visually. Some critics are unhappy with the poor Scenario Campaign and the immensely powerful boss Azazel.

You can play Tekken 6 on the PlayStation Vita.

At the time of release (in 2000), this game was almost sensational - the developers introduced a new feature that blew the minds of fans. You can take two fighters and change them during the battle to allow one to rest and restore a bit of health. Such a decision opened fresh strategies for competitive players. With a great roster and pretty visuals (as for a PS2 game), this was a solid experience of local multiplayer.

Tekken Tag Tournament is based on Tekken 3, so it doesn’t add too many new features to the gameplay. With the time flow, the game lost its greatness. For modern standards, it doesn’t look good and many players prefer the classic one-fighter approach.

The second installment to the series was much, much better than the first one. In 1996, the developers added more characters and modes (and personality of the franchise). The visuals were significantly improved. For the first time, the series got its clear distinguishing features in the fighting mechanics.

Tekken 2 was super successful in the era of the original PlayStation. Only the following release of Tekken 3 made this fighting game come to the shadow.

Modern players may feel surprised by how high this Tekken ranked - it is limited in many aspects. But the game is balanced very well, and it offers a very good experience for retro gamers and fans of the series.

Many good improvements of Tekken 4 were taken into account and many bad decisions in that game were thrown away in the development of Tekken 5. We have no slopes and rather defensive mechanics. The fighters became better in active attacking. The whole gameplay feels perfectly balanced in comparison to the predecessor (and many other games of the series).

Many consider the story in Tekken 5 the best among all Tekken games. Visuals look decent even now (you can play it on the PlayStation 3 or PSP). Also, the soundtrack is worthy of mentioning - the music is amazing! The update Tekken 5: Dark Resurrection Online significantly expands the multiplayer experience, but it still is not as advanced as one in Tekken 7 (after all, Tekken 5 is still a game from 2005).

This game has boosted the Tekken franchise to high standards of the modern gaming industry. In 2017, the developers used the power of the PS4, Xbox One, and gaming PCs very well - battles look amazing and the cutscenes in the story mode are very beautiful. Players have many fighters to choose from and multiple modes to enjoy. It’s like the game absorbed all the best from its predecessors.

In addition to many advantages of this game as virtual entertainment, Tekken 7 is also a perfect esports discipline, where players can find the full use of their competitive nature. Even if you don’t want to participate in EVO or Tekken World Tour, you can fight for a better Tekken rating with online opponents - thanks to the power of the Internet, the multiplayer modes of this game are just on the next level.

Tekken 7 remains quite accessible to newcomers, but some additional help at the beginning will help to learn how to play this fighting game even faster. Check out our Tekken 7 guide to make flawless entrance to the game.

Many fans and critics consider it the best Tekken game ever. Tekken 3 is old, all right, and it doesn’t have advanced graphics and many features of the later installments. And still, the overall feeling of playing it is exceptional. In 1998, the game was a breakthrough for the Tekken series and the whole fighting genre. It reached such amazing heights that not so many competitors can come close to this level.

Many great inventions of the series can be found in Tekken 3. With this game, the franchise has been refined and the current success of Tekken 7 has obvious roots in that PlayStation release.

If you are interested in this classic fighting game (to form your own opinion, for example), you can play it on the PlayStation Classic.

This list doesn’t answer the question How many Tekken games are there - we haven’t included in it some compilations and remastered versions. Also we decided to skip such games as Tekken Card Tournament because the core gameplay there is too different from the lighting traditions. The game Street Fighter X Tekken is not here as well - technically, it’s a Street Fighter game with Tekken characters, so let’s wait for Tekken X Street Fighter, which will be developed by Bandai Namco as a Tekken game with Street Fighter characters.

We at DashFight love fighting games, but we will not recommend trying out all of the Tekken games from this post. One of the best things in this franchise is that only one game may be enough. And we would totally recommend Tekken 7 as a primary destination for beginners and experienced players. Even if Tekken 3 is the best in the series, it can’t replace the feeling of being on one page with most of the playing community. Probably, the situation will change when Tekken 8 will become a real thing - and we’ll inform you about it here, on DashFight. Stay in touch with us on Facebook and Twitter! Join our Discord!

Be the first to get the latest TEKKEN 7 news and updates!