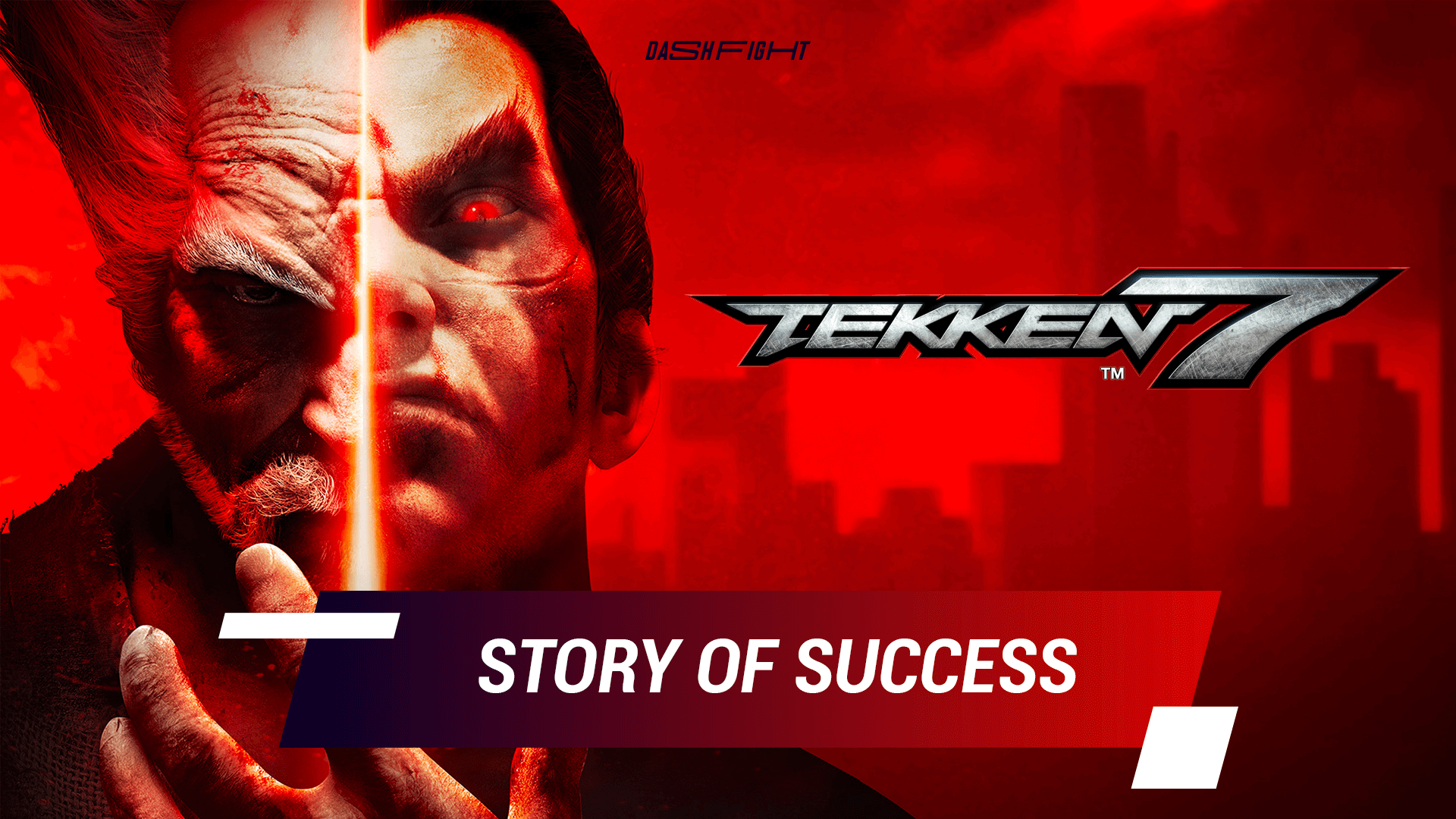 A Story of Success: How Tekken Burst into the Industry

Can you imagine those dark times when humanity vegetated without Tekken on their consoles and computers? Yes, it’s true, it was possible for people to live without Tekken games at all (probably they spent this waiting period in matches of Street Fighter, who knows). But then, the miracle happened at last, and Namco released the very first game of the series in 1994/95. The era of Tekken began.

Since then, the franchise has become one of the most popular in the fighting game community and the developer has earned quite a lot of money. In fact, it’s a cultural phenomenon, super significant for the vast Gaming Universe. Delving into its glorious history is quite an entertainment for all the fighters among gamers (and for everyone else, in fact).

How many Tekken games are there?

We are blessed to have… quite a lot of them:

It would be really a long story to discuss each of them. Let’s concentrate on all Tekken games of the core series.

First, it was a release for arcades (1994). Then, the game became available for the first PlayStation console in 1995.

Everything started with… another fighting game, named Virtua Fighter. It was released by Sega, but Namco hired that development team to work on a test case for 3D character models and make a game out of it. They named the project Rave War but then changed it to Tekken.

The original Tekken was technically innovative, but it had a big way ahead to grow as a fighting game. As for the mid-1990s, visuals were surprisingly good. The idea to put textures on the 3D models made the whole picture very appealing to the playing audience. Still, the fighting mechanics were a bit plain even in comparison to games of that time. Many players complained that the final boss was overpowered - it isn’t the best Tekken but it is a great start indeed.

In 2005, this game was also released for the PS2. The company sold 1 M copies - it’s the smallest number in the series.

The second game was released shortly after the first one - in 1995 for arcades and in 1996 for the PS consoles.

It was a significantly improved version. This time, the developers make more efforts to balance the fighting techniques. The level of AI opponents has become more interesting to fight in the beginning and more bearable in the end.

The visuals also were much, much better, and Namco added a few new characters. Some of them were hilarious (kangaroo and dinosaur), which became a good tradition for all Tekken games. And those characters had quite different fighting styles, so the game had very good replay value. Players got a few new modes and a nice choice of stages.

Now, the game is also available on the PS2 as a bonus for Tekken 5.

This game completes the era of the first PlayStation in the Tekken series. The developers took a bit more time to finish this project, and the result was exceptional. Many consider it the best Tekken game ever and even more - the best fighting game of all time (DashFight put it at the top of our list of Tekken games ranked from good to the best). Tekken 3  was released in 1997 for arcades and in 1998 for the PlayStation.

Tekken 3 had a bigger variety of characters. The story became much darker and more engaging. Technical improvements were everywhere, from visuals to mechanics and the general feeling of playing the game. The developers added new moves and fresh ways to avoid attacks, They increased the significance of sidestep dodges. New modes in Tekken 3 were mini-games Tekken Force in the beat ‘em all style and Tekken Ball, which is a kind of fighting volleyball - the company was brave to experiment with its creation.

Namco sold around 8.5 M copies of Tekken 3, and this is an amazing result! The game was easily accessible and it opened a huge depth for improving virtual fighting skills.

Now, you can play Tekken 3 on the PlayStation Classic devices.

The developers took a break for releasing the game Tekken Tag Tournament, so the fourth installment of the main series became available only in 2001 for arcades and in 2002 for the PlayStation 2.

The new system allowed delivering much more advanced graphics and better gameplay. For the first time, players could interact with objects in the virtual world (press the opponent against a wall, for example). Tekken 4 tells its plot in the special Story Mode (instead of the Arcade one) - through cutscenes.

Better visuals and traditionally nice fighting mechanics weren’t sufficient factors to repeat the success of the previous game. It seems like many players expected to see something of the same kind as the classic Tekken, but the developers were rather too innovative in some aspects.

The company sold almost 2 M copies. Despite some cautious reviews, Tekken 4 was a good transition to the new era of fighting gaming.

From the point of game mechanics, Tekken 5 made a significant leap towards offensive fighting style. It was a return to roots after rather defensive Tekken 4. Many fans of the series consider the fifth installment the most balanced one. Easy-to-use fighters, suitable for beginners, became weaker - so you should put some effort into practice to get sweet victories.

Another kind of balance was added to the game as well - the balance between classic gameplay and fresh ideas. You feel it as a Tekken game but can notice an increased speed and new effects of the moves. This is the first one in the Tekken games list, where players can customize their characters! The mini-game Tekken Force has been replaced by Devil Within, made with a more action-like style.

The overall sales of the original and improved version of Tekken 5 reached the number of 8.2 M copies.

The arcade version of the sixth game was released in 2007 and the console one appeared only in 2009. For the first time ever, players could enjoy this fighting series on a non-PlayStation console - Xbox 360. Of course, the PS3 version was also there.

Tekken 6 has an increased variety of characters and lots of improvements in comparison to previous installments. First of all, you would notice a huge leap in visuals. It is obviously a PS3/Xbox 360 game, so it is very close to the modern gaming standards. The battles look quite realistic, and even the fantastic appearance of some fighters do not spoil this impression.

The game is nicely balanced and has a lot of various modes. It’s a very good version for both newcomers and enthusiastic fans. The presence of online battles boosted the multiplayer experience very significantly.

The development company (named Namco Bandai this time) sold around 3.5 M copies of Tekken 6. You can play it now on PlayStation Vita as well.

At last, PC gamers have their turn in enjoying the famous fighting series. Tekken 7 is the newest and one of the best Tekken games in the franchise. It was released for arcades in 2015 and for the other gaming devices in 2017. The game is more than alive in 2020! We have lots of new content added over time and more come in the future.

As usual, Bandai Namco made lots of improvements so the transition to the new game seems reasonable for hardcore and casual players. After all, the developers have really powerful machines to run their visual and gameplay ideas.

Tekken 7 offers even more impressive depth in fighting mechanics and an even bigger variety of characters. And still, it is quite accessible (and enjoyable) for everyone. You can be mashing buttons and get some victories and have lots of fun. Of course, if you want to get better and win against decent opponents, you should put much more effort into the practice - at least, check out our guide on How to Play Tekken 7.

It would be a very, very big article to describe all the features of Tekken 7. It has an amazing customization system - the most advanced in the series. It offers a great online multiplayer experience. Tekken 7 even inspires people to play professionally - it is one of the most popular fighting esports disciplines right now.

Have you noticed something? Our description of the Tekken video games almost never touches the storyline. We have two reasons for this. The first one - plots are not so important in fighting games. And the second - it would blow the mind of anyone who tries to understand all the events in Tekken through text. Everything started with the fighting tournament King of Iron Fist but became overcomplicated over time. Probably, everything we need to know is that Tekken means Iron Fist, and the arcade/story modes will tell you the rest.