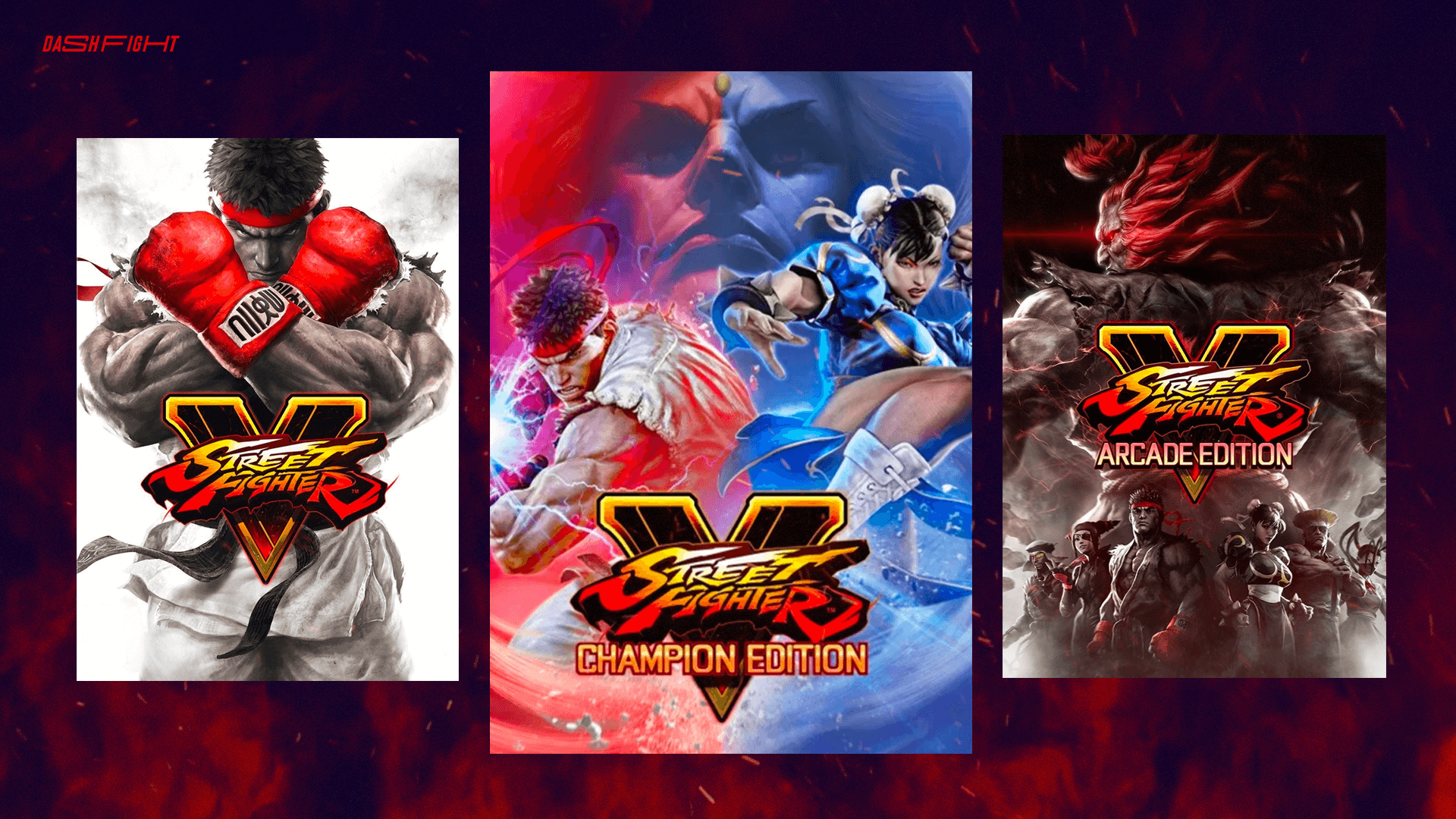 Capcom
#Guide#Evergreen
Arcade or Champion? What’s the difference? What should a beginner buy? How to get SF5 cheaper or (almost) for free?

Capcom is well-known for re-releasing the Street Fighter games again and again. They change the names a bit and call them different editions - the developers add extra content to these editions or remake the game for a new device.

In the past, the fighting games community got quite a few various Street Fighter editions. It would be even easy to get confused with them. For example, what’s the difference between Street Fighter II Turbo: Hyper Fighting and Ultra Street Fighter II: The Final Challengers?

We at DashFight don’t like to see fighting gamers confused, so we took the exciting mission of explaining various aspects of Street Fighter 5 - for you, guys. We’ve highlighted the basic mechanics in this SFV guide for beginners. And now, we feel it's time to talk about the editions of this game.

What are Street Fighter editions for?

Let’s put the community-friendly aspects of game development aside and talk about the business part of this industry.

Releasing games is a very costly process. Big companies are ready to make such investments, but they want to get revenue as soon as possible. Also, the release date of such popular franchises as Street Fighter is often connected to partnerships with other companies and busy schedules of esports events.

The business purposes often push the development teams to release a game in its basic condition - totally playable but without many extra features. Addition of those features to the basic product is a release of a new edition (in the terms of Capcom game development).

Creating new content is also a very costly process. That’s why, the developers sell new editions as a (more expensive) game or offer a chance to upgrade the previous edition.

Many companies use this scheme. For example, you can purchase the basic Tekken 7 game or pay for Tekken 7 - Ultimate Edition and get fighters and stages of all the game Seasons.

Nintendo has a bit different approach - they sell only one edition of Super Smash Bros. Ultimate and then offer players paid characters and stages.

Many editions of the Street Fighter games have one more specific purpose - the company sells old games for new devices. For example, the most successful (so far) installment of the SF series, Street Fighter 2 was initially released for arcades, and to play it on PlayStation 3, you can buy Super Street Fighter II Turbo HD Remix. The Nintendo Switch owners can enjoy the most enhanced edition Ultra Street Fighter II: The Final Challengers.

SF5 is a perfect example of how the business purposes create editions of a fighting game.

The basic version of Street Fighter 5 was released in 2016. It was unfinished and lacked lots of playing options (mostly single-player modes). Capcom hurried the release and got lots of negative responses - even if the game mechanics were quite good.

Then, they released Street Fighter 5: Arcade Edition in 2018. It’s a strongly improved version with many new fighters, stages, and game modes.

The development process wasn’t completed yet, and in 2020, the community got Street Fighter 5: Champion Edition - with even more characters, stages, and costumes.

What edition of Street Fighter should I buy?

(Thank goodness) Capcom doesn’t sell that underdeveloped initial version of the game. For now, Street Fighter V: Arcade Edition is the basic and cheapest choice. It’s a good edition for casual fighting players, who don’t really know whether they love the genre and just want to have fun in occasional matches. If you do not feel enthusiasm for becoming an esports professional or stream the game on Twitch, the Arcade Edition may be a good choice for you - it will be possible to upgrade it later.

16 characters of the Base Roster:

6 characters of the Season 1

and 6 characters of the Season 2:

Serious fighting players should definitely purchase the Champion Edition! You will have all the content to enjoy the game and improve every aspect of your skills.

6 characters of the Season 3

and 6 characters of the Season 4

Please, take a look at our guide on how to unlock all Street Fighter 5 characters.

Four ways to save money on the Street Fighter games

After four year of existence, the game becomes available with sweet discounts.

Play the game through the PlayStation Now service. This subscription costs around $60 per month and includes tons of PS2. PS3, and PS4 games. Street Fighter 5 is one of them, so you get it for free, as an addition to a huge game library. PS Now is available for PC and the PS4.

Street Fighter V is a super deep fighting game. It has the power to captivate players for many years. Are you ready for this? Then welcome to the SF family! DashFight is here to make your experience even more joyful. Stay tuned to us on Facebook, Twitter, and Discord.