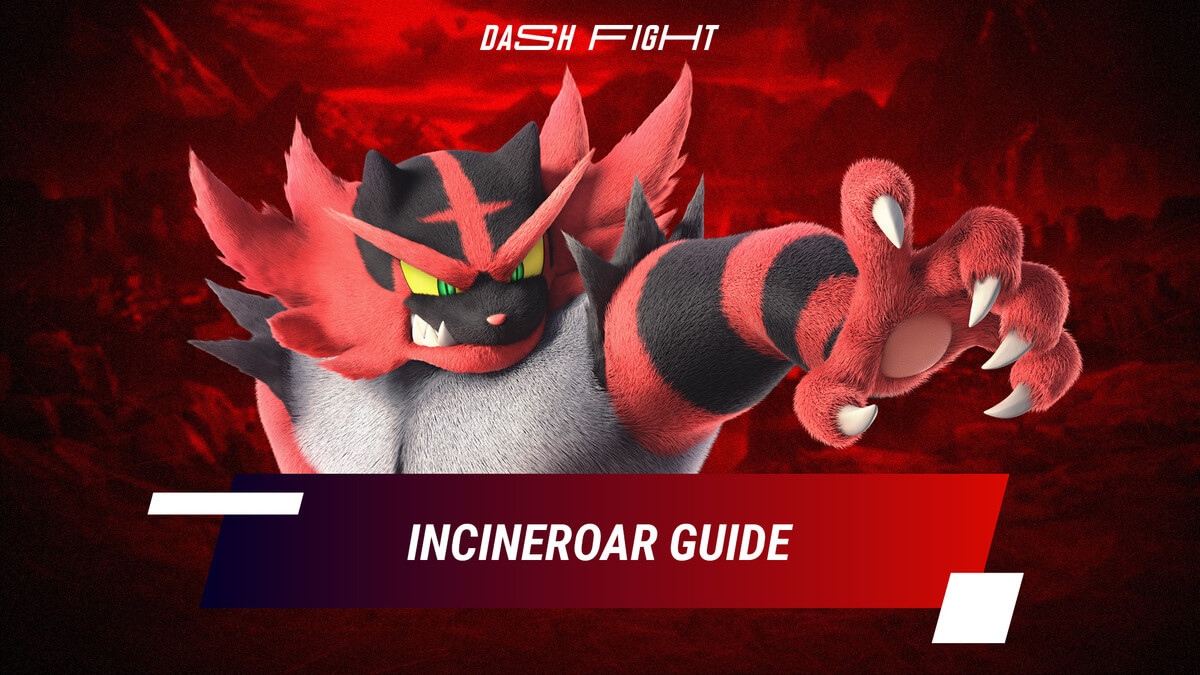 Smash Ultimate: Incineroar Guide - Combos, Moves and How to Play

#Guide#Evergreen
Unleash the power of this amazing fire cat! Learn his attacks and let them bring you many victories in SSBU.

Do you like Pokémon? These fantastic creatures originate in the super popular role-playing series. Trainers collect them to their Pokédex, and Pokémon enjoy fighting each other, using both simple attacks and breathtaking moves. Obviously. they are very good characters for Super Smash Bros. Ultimate. And Incineroar is one of the most impressive Pokémon fighters in the game.

Of course, to play Incineroar Smash, you should practice a lot, remember all the moves, practice, learn powerful combos, and… have we mentioned practice?

This SSBU guide on DashFight gives some info on the personality of Incineroar and describes his move set. Previously, we published such a guide on another Pokémon, Greninja.

A bit of Incineroar’s background will definitely be useful for dedicated players - it’s nice to know your fighter better.

So, if you ever played a Pokémon game, you know how everything starts there. You, as a trainer, get your starter Pokémon, choosing from three creatures: Grass, Water, or Fire type (or electric Pikachu in one game). Then you develop your starter, make it stronger, and soon the creature evolves, turning into another Pokémon of the same family. (Are you still here? We will have the part about Incineroar very soon). Starter Pokémon has two stages of such evolution. And Incineroar is the second, final one for a starter Pokémon from the games Pokémon Sun and Moon.

First, Pokémon trainers get Litten. Then they evolve this kitty into Torracat, which later evolves into the beast-like Incineroar.

The Super Smash Bros. series has been offering Pokémon in the roster since the very first game. But Incineroar is a new creature. His original appearance was only in 2016, and it’s quite natural for the fiery cat to be a newcomer to Super Smash Bros. Ultimate, which was released in 2018.

It’s quite interesting that Incineroar was revealed in one trailer with Ken from Street Fighter V.

This Pokémon is quite big and that’s why he is a bit slow in the splashy fights of SSBU (almost an opposite to very fast Captain Falcon).

Smash Incineroar is a wrestler and this strongly affects his attacks. Many animations and attacks definitely can remind players of the battles in Pokémon Sun and Moon.

To compensate for the low speed, the developers made Incineroar very powerful. His hits deal quite a lot of damage - if you can land them. The hardest opponents for the big cat are fast fighters (such as Sonic, for example).

Basic Attacks - how to play Incineroar

This fire Pokémon definitely has significant strength to deal damage by individual attacks, but of course, the effect will be much better with chaining them into each other.

Here are some bread and butter SSBU combos for Incineroar. Bring them into your game and then build even more impressive combinations upon this basis.

Down Throw is a good combo starter for Incineroar.

You can get a similar effect with Down Tilt as a combo starter.

Experiment with these combinations to get more out of them. For example, try to repeat Down Throw after Up/Forward Air, or bring Back Air.

You can start a combo with Neutral Air, Up Smash, and Up Tilt.

Many SSBU players consider Incineroar quite accessible, so it can be recommended even for beginners. Play this fighter carefully outside the platform. Consider his slow speed and take advantage of his strength.

If you want to play this fighter really good, check out our Super Smash Bros. Ultimate Guide for Beginners (and of course, practice more… seriously).