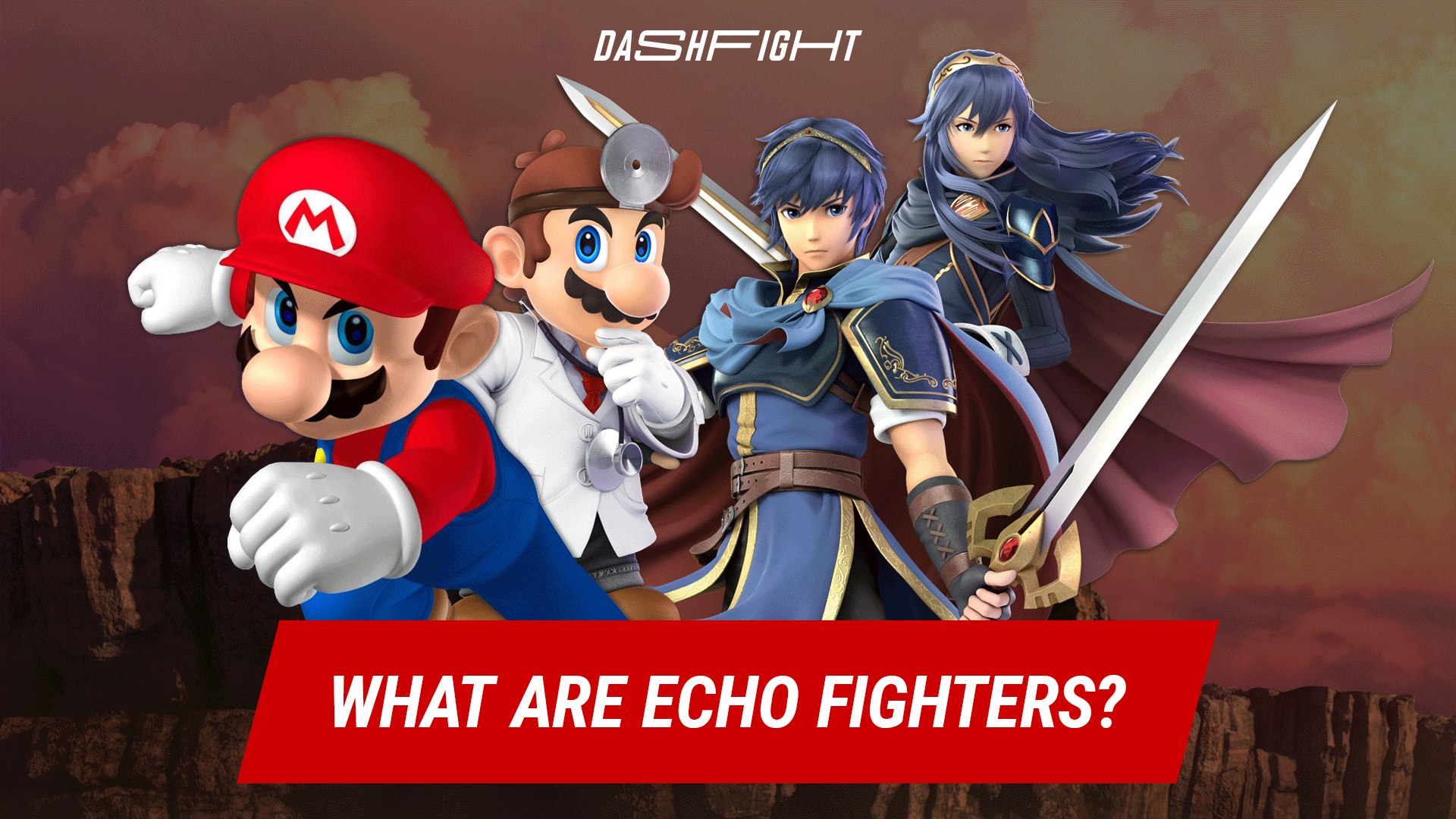 Echo Fighters, what are they?

Since the first game in the franchise, Super Smash Bros has had characters who share various moves or whose moves share a lot of similarities. Fox and Falco in SSBM are prime examples of this. Interestingly enough, it was not until the release of Super Smash Bros Ultimate that Nintendo officially acknowledged the similarities in the design of these characters, though not all of them. The way they chose to categorize them was then to use the term Echo Fighters.

Even with this new category, which uses a small "E" to distinguish between characters, there are still plenty of fighters that could be considered Echo Fighters. Many arguments have been had as to what are the exact parameters of the category are. For the most part, it seems like it comes down to how game's director Masahiro Sakurai feels the character should be categorized. For this reason, we are splitting our guide on Echo Fighters into two sections. Official and unofficial Echo Fighters.

The biggest difference, competitively speaking, between these two Fire Emblem sword fighters lies in how Chrom lacks sweet spots, areas of extra knockback or damage, in his attacks, a feature Roy players are keenly aware of at the higher levels of competition. Aside from that, most moves share a lot of similarities in terms of animating. Though Chrom lacks the fire effect seen in Roy's attacks, he also gets his own special.

Although they don't fall too far from each other in tier lists Roy is generally the favorite thanks to small advantages in frames as well as the aforementioned sweet spot mechanic.

Perhaps the closes full-on clone that exists in SSBU. The movesets for both characters are identical, with only slights variations with their hurtboxes. In competitive play, they might as well be different skins for the same character.

The two characters are nearly identical. The biggest difference for competitive players comes down to his Silver Arrow and Electroshock Arm. The former has higher speed at the cost of range and controllability, making it a, in theory, worse option. In reality, it allows Dark Pit players to treat it as a normal projectile which for many is a benefit. Electroshock Arm, the character side Special attack, replaces the purely vertical angle of its counterpart with a narrower angle of knockback.

For most professional players, the two are identical with mild differences or at least not enough to warrant splitting them into most tier lists or analyses. Nevertheless, you will find some Pit/Dark Pit players who will gladly speak about the importance of the differences that do exists.

Much like Daisy and Peach, these two Samus are virtually the same character. The most notable differences come from a change in the damage type of Samus' attacks from fie to electricity for Dark Samus. Aside from that, minor animation changes, and an obvious color change, would be the only other change.

The two Street Fighter characters are considered to stretch the definition of Echo Fighters considerably. They do share core mechanics and many of their moves. But Ken has a unique held forward tilt, held far neutral, up aerial, neutral aerial, forward smash, and back throw. On top of that, Ken gets two unique command input moves, two kicks. Even being as different as they are for an Echo Fighter, the two generally sit alongside in competitive play with not too much disparity.

Marth carries a very small advantage over Lucina since she doesn't have the tipper mechanic Marth does. Tipper meaning that hitting with the very tip of their sword will deal extra damage and knockback. To compensate for this, the damage and knockback of other attacks have been adjusted. Nevertheless, she still has sweet spots for her attacks. In competitive play though, matchups can vary from one to the other, since players will prioritize tippers and sweet spots over a general strategy.

Once again, much like Peach and Daisy, the Belmonts are, for all intents and purposes, the same character. Only Holy Water has a change, in its damage type, which could be considered an advantage or disadvantage depending on the matchup.

The following characters are not officially recognized as Echo Fighters, but the community at large has noticed they share many similarities. These can range from a single attack to nearly all of their movesets.

With every new installment of the Super Smash Bros franchise, Falco and Fox grow further apart. With SSBU, the two are generally considered to have similar movesets, but they are clearly two separate characters. Flaco sports his own neutral combo, forward smash, neutral aerial, forward aerial, and more. In a competitive play, Fox is the preferred character, but that doesn't stop the existence of Falco mains and specialists.

Perhaps one of the most significant disparities in the game. Mario and Dr.Mario share many moves, with Dr. Mario getting his own Down Aerial, Back Throw, and Down special, dash attacks, forward Smash, among others. All this still puts him as one of the closest to the original character. Dr.Mario is heavily unfavored in competitive mode, often at the bottom of most rankings due to his attributes.

A carry-over from many games ago, Ganondorf used to be a much closer Echo Fighter to Captain Falco, sharing many of his moves back in Super Smash Bros Melee, all be it with much slower animations. Over time they grew apart and now days only their Down Smash attack is the same. Although neither is fully embraced in top competitive Super Smash Bros Ultimate, Ganondorf, with his slower movement and heavier build, is considered the consistently worse character of the two.

When first shown, many players believed Isabelle was going to be classified as an Echo Fighter; after all, many of her moves looked, at first, like Villager moves. Though upon closer inspection after her release, it was clear that, although she is similar, she has a few changes that make her a worthy separate character. Her movement is greatly increased compared to Villager, but she losses the ability to wall jump. She also sports a unique ground and aerial neutral attack, up tilt, forward, up, and down Smash, and side and down specials.

Although the two share a total of three attacks. Generally speaking, the two can feel very similar outside of the PK Fire and PK Lighting moves. But in competitive play, the differences that exist in their movesets stand out. Particularly with Lucas receiving a tether attack as well.

Over the history of the franchise, the two brothers have grown apart. in Super Smash Bros, Ultimate Luigi has a unique or altered extended grab, forward tilt, and up tilt. In the game's competitive side, the two are often found in the lower half of tier lists and brackets, with Luigi having the honor of achieving some meme status thanks to his infamous combos.

The most apparent difference between these two electric type pokemon is that Pichu will inflect self-damage, also called recoil damage, to himself after performing lighting-based attacks. To offset the recoil damage, Pichu's attacks tend to deal more damage overall. Outside of that, Pichu has a unique Forward Tilt, aerial, and up Smash compared to Pikachu. In competitive SSBU rankings, Pichu usually falls well below Pikachu due to the recoil damage primarily. Though that means he is still very high tier since Pikachu is widely considered among the absolute best characters in the game.

Roy has a unique neutral, forward, and uptilt. A unique dash attack. Down aerial and neutral and up specials attacks. This last one is also a multi-hit. For SSBU, both Roy and Marth received new forward throws. Generally, Roy is considered the faster character of the pair a trait most high-level players will favor above all else, making their differences wide enough for far placements in tier lists and most rankings.

Both Young and Toon Link technically come from the original Link. Due to the various changes in the games, and even different representations of Link, or what we call Adult Link, it is hard to say who the original character is. To complicate matters, Link received a suite of new mechanics and moves in Super Smash Bros Ultimate thanks to the latest entry of that franchise, Zelda: Breath of the Wild, giving Link a whole new set of toys to play with.

The key components separating Toon Link from Link are his model, which more closely resembles Young Link, if anything. Then come his attacks, a unique Forward, up, and final Smash along with different forward, back, and neutral air attacks. Finally, his forward and backward throws differ from that of Link.

Young Link then uses a large set of Link's moves, with just his part of his neutral attack, up tilt, dash attack, grab, and down special being unique to him. Players have compared him to link before the changes introduced in SSBU.

Besides those listed here, the Super Smash Bros franchise has a long history of characters who have been very close to straight copies of each other at some point or another. Wolf and Fox, for instance, were much closer than what we see today. Furthermore, characters like Pyra and Mythra are arguably very similar. If made into separate characters, they might fight right in with the Echo Fighter category or even outside of it. Do you think we missed anyone on this list? If so, let us know!