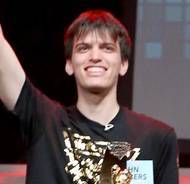 John Goldberg or "John Numbers" is an American Super Smash Bros player and member of the House of 3000 crew.

He mains Wii Fit Trainer in Smash 4 and Ultimate, Charizard in Project M, and Lucario in Brawl with his playstyle varying slightly depending on the character.

John Numbers won the 2015 Nintendo World Championship and was a runner up in 2017. He has won matches against top contenders across smash platforms including Frozen, Mr E, NAKAT, Odyssey, Suarez, and WaDi.

Ranked 4th on the New York Smash 4 Power Rankings and 9th on the Ultimate New York City Power Rankings, John has an overall set count of 71% and is a regular at Nebulous Prime and Xeno. He has teamed up with smashers like Sinji for smash doubles matches.

At GENESIS 7, John ranked 33rd and tied with CPU, Evy, Keroguchi, and varun for the  honor of obtaining the highest rank by a Wii Fit Trainer main at an S tier tournament for Ultimate.