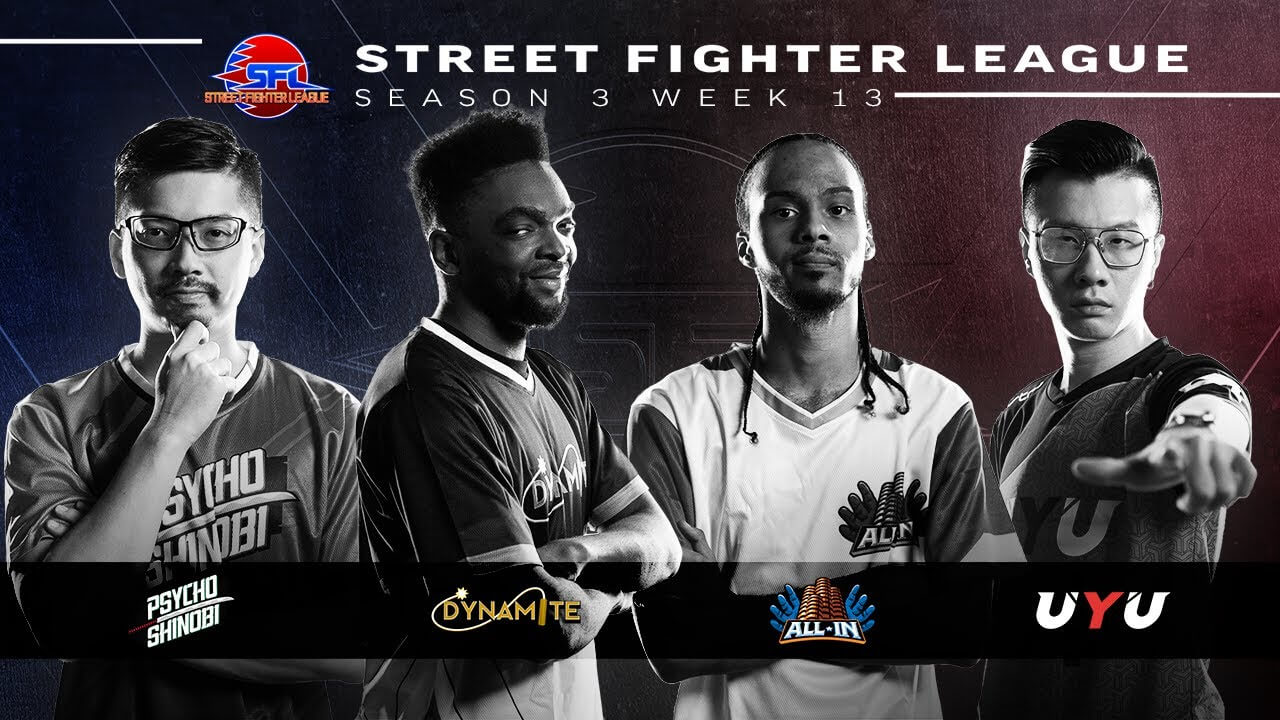 Pic Source: Capcom Fighters YouTube
#News
The closer we are to the end of the group stage, the tougher these Street Fighter matches become

This Week at Street Fighter League Pro-Us had two quite important matches.

In one of them, the previous leader, All-In could try and improve their standings situation. Their opponents from Dynamite had a chance to recover from the loss to NASR and get more win points.

The second match was technically more significant for Psycho Shinobi - the team still has chances to reach the playoffs. But practically, imagine the motivation of the UYU guys who have no victories in this Street Fighter tournament at all.

The best way to enjoy fighting esports matches is to watch them on video and experience the thrill without knowing the results. If this is your approach, stop scrolling this post right away - it contains spoilers. Take your time to watch the stream of Street Fighter Legacy Pro-US Week 13 on the Capcom Fighters YouTube channel.

If you are looking for the results, they are coming soon!

Before delving into the details of this match, take a look at the interview with Xian, where he talks mostly about their recent success against All-In.

Also, listen to JB who shares his impressions from the match against Alpha 3, the tournament leader (UYU lost, but JB managed to defeat Punk). What do the remaining matches of Street Fighter League mean to JB and his team?

The UYU guys really had a chance this time. At least, they’ve proven their level, but the opponents were stronger. Thanks to this victory, Psycho Shinobi made their hope for playoffs quite real.

Xian is obviously the hero of this match, and he shares his impressions in this short interview:

MenaRD from Dynamite is not happy to be defeated by NASR last week and he is ambitious for the rest of the League and playoffs. Here is an interview with him:

SKZ sounds confident during his interview and expresses plans of the All-In team to enter playoffs through the winners bracket and then defeat Alpha 3.

Smug was so powerful during this match, but iDom managed to stop that Balrog in an absolutely breathtaking match - guys, just watch this moment.

For All-In, this victory is a great step towards the winners bracket. The fate of Dynamite will become clear in the following weeks.

On January 29, we’ll be able to watch matches of All-In vs UYU and NASR vs Alpha 3. Are you ready for this Street Fighter excitement?

You can see iDom in other matches as well. For example, he recently played against Shine in the Grand Final of NLBC Online Edition.

Street Fighter League World Championship was planned as an offline event, but Capcom made a difficult decision to move it online and cancel Capcom Cup 2020.