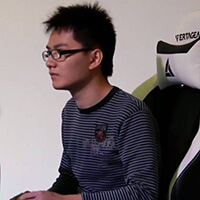 Niel "SKZ" Chong is a Seth main, competitive Street Fighter player from Singapore. His most notable achievement to date is a qualification to Capcom Cup 2020 by winning CPT Online 2020 Southeast Asia 1 tournament, where he defeated Quan Ban "IamChuan" Chuan in the Grand Finals.

SKZ also have been active back in 2016, when he reached top-8 at FV Cup and took 4th place at CPT 2016 Online Qualifier.