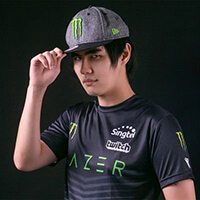 Kun-Xian Ho, known simply as Xian, is a professional fighting games player from Singapore. According to Xian's wiki page, he was born at September 15, 1990, and currently representing Team Razer.

Xian's most significant achievement is beating Tokido in Super Street Fighter IV: Arcade Edition EVO 2013 Grand Finals. Xian used to main Gen in Ultra Street Fighter IV with a strong Dhalsim secondary but in Street Fighter V, he quickly became the best F.A.N.G. player in the world. Nevertheless, since 2017 Xian has played mostly Ibuki and Seth at the pro scene, which brought him to the 1st place at Final Round 20, LAN Story Cup 2017 with another big win over Tokido, 2nd place at Combo Breaker 2018 and 4th at Capcom Cup 2018. More recently, he won 1st place in EVO 2021 Online SFV - Asia South.

Xian's Twitter (@XianMSG) and Twitch channels are very active, as he loves to communicate with fans and show his love for games and anime. He also used to work in a gaming cafe before starting a professional career, and he's been playing fighting games since the age of seven, which made him a very skillful King of Fighters player.

Xian also made his appearance on Injustice 2 and King of Fighters XIII pro scene.