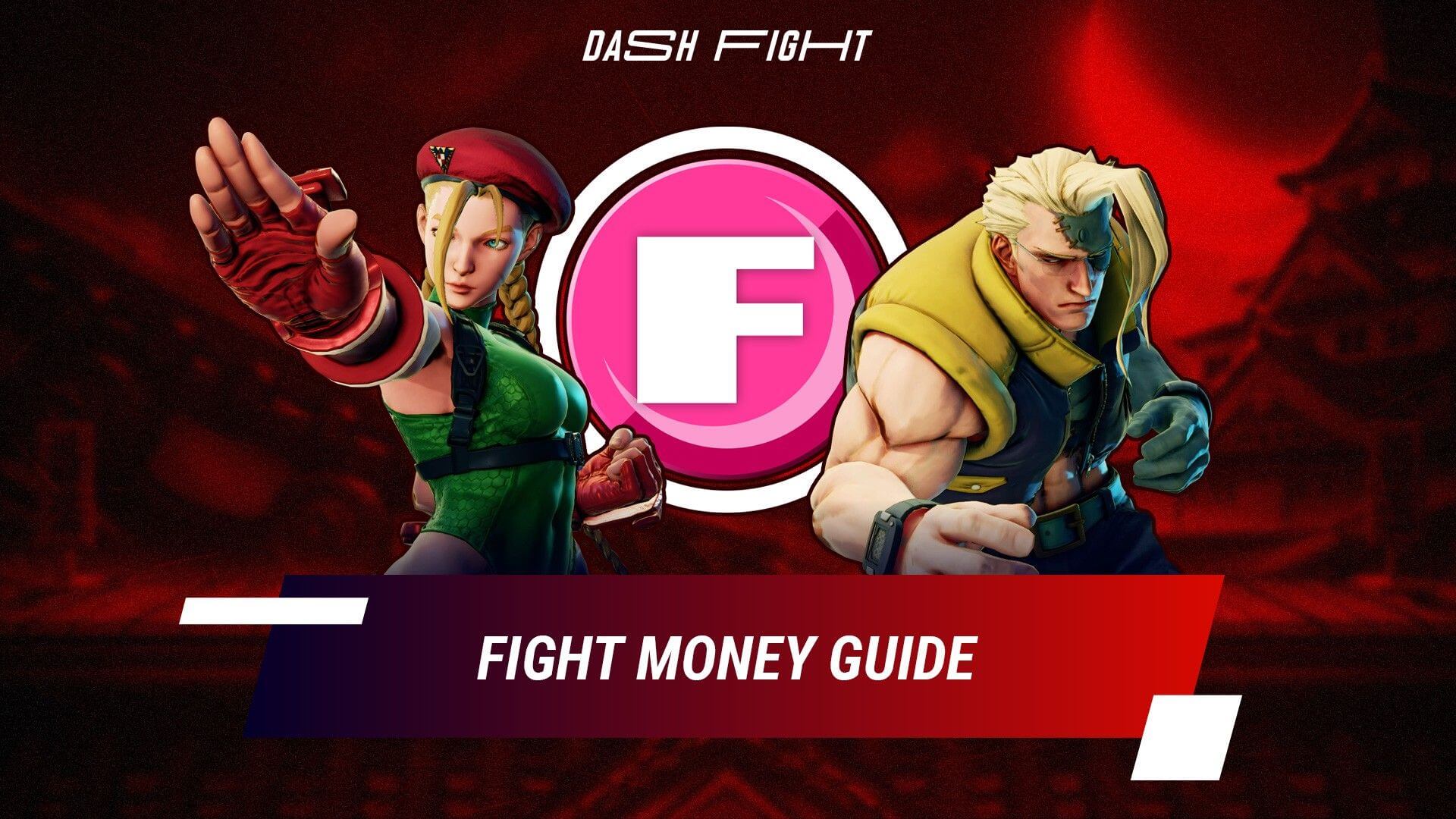 Capcom
#Guide#Evergreen
Do you fight for glory, for money, for fun, or for a bit of everything?

It’s so nice to earn money playing video games. In Street Fighter V, you can do it by becoming a professional esports player or streamer. Or if you don’t want to bother with such long-term and even difficult paths, you can easily earn lots and lots of… in-game money. Ok, it’s absolutely not the same, but the feeling of having thousands of those coins on your account is so amazing. Imagine how much stuff you can purchase! But wait a moment - what really can you buy with Fight Money in Street Fighter? And probably an even more important question is - how can you build your in-game capital?

Here is a guide on DashFight to get answers to all your money-related questions (unreal virtual money this time). If you are interested in a general guide on this awesome fighting game, take a look at the post How to Play SF5.

Get ‘em all - SF5 Fight Money for characters, costumes, and more

Let’s make the whole situation with Street Fighter V Fight Money clear to the max. The game has two editions:

Fight Money is an internal game currency that allows you to unlock additional fighters and stages in the Arcade Edition. Fight Money is useful even in the full version, Champion Edition - you can get some new costumes and decorations for your profile.

There are lots of modes in Street Fighter, and most of them give you… experience. Yep, earning SFV Fight Money is not that easy. One of the highly recommended methods is to get many experience points, level up your character, and earn 1000 FM per each level.

Start with Character Stories - it’s not hard to complete them, and the fighter will level up significantly.

Have fun in the Survival Mode - it also brings EXP. The high level of difficulty brings a bigger reward.

Level up each of your characters. Usually, it is recommended to stick to one guy or a girl to learn them better (if you like Sagat or Dhalsim - practice with them a lot to learn all their features). But for purposes of this Street Fighter 5 Fight Money Guide, it would be better to play with all the available characters, then use FM to unlock someone new and take them to the same path of leveling up. Such an approach will also be helpful for your playing skills - you will be able to try out the strengths and weaknesses of all your potential opponents.

How to earn Fight Money directly?

In Street Fighter 5, you’ll have two options to earn Fight Money without the intermediation of experience:

Another interesting way to get experience or earn money is to complete special missions. Capcom provides players with a lot of such time-limited tasks, and you can get very decent rewards from them.

Another, very similar option is to complete Extra Battle tasks. They appear in the Challenge section (the same as Missions) and really can be very challenging. Some of the Extra Battles require a specific level of skills, so be reasonable in your decision to take them. Also, you might need quite a lot of time to complete a task — for example, defeat different very powerful AI opponents throughout a few weeks.

Extra Battles are an excellent way to improve your playing skills. But for earning Fight Money, they might not be the most efficient. To participate in some of these challenges, you have to pay an entry fee, and it’s so easy to lose money instead of earning. Still, the rewards for successful competitors are usually quite impressive. Just make sure an Extra Battle gives Fight Money or Experience.

It’s pretty easy to track current Missions and Extra Battle tasks — they are visible when you start a game. So, you need only to choose what you want to complete.

What you can Purchase with Fight Money

Of course, Fight Money is not the primary reason to play Street Fighter 5, but they bring additional excitement to the game.

Please notice, you don’t have to grind experience for unlocking everything. You can do this if you like the completionist style. But you also can avoid repetitive fights and just enjoy the game with fighters, stages, and costumes you already have.

For other interesting and helpful Street Fighter articles, stay tuned to DashFight on Facebook and Twitter. Join our community of enthusiastic players on Discord!