Do it like pros—join us:
Home
News
Street Fighter V - Understanding Stats

Copied!
Why do we see almost identical situations each month? Do Street Fighter players actually need these statistics?

Capcom regularly shares the official stats of Street Fighter V through this site. Each month, we can see info on the character usage, win rates, and ranking of the players. On the one hand, the statistics are very interesting - it’s such a thrill to go deep into everything around your favorite fighting game. On the other hand, the names and numbers are almost the same throughout the year. Should we even bother with these charts?

In fact, SF5 stats can be both helpful and decisive. If you understand the background, you will be able to come to wholesome conclusions, but this is not always easy for beginners in the game.

Let’s take a look at this chart. It shows the most popular Street Fighter characters in December 2020: 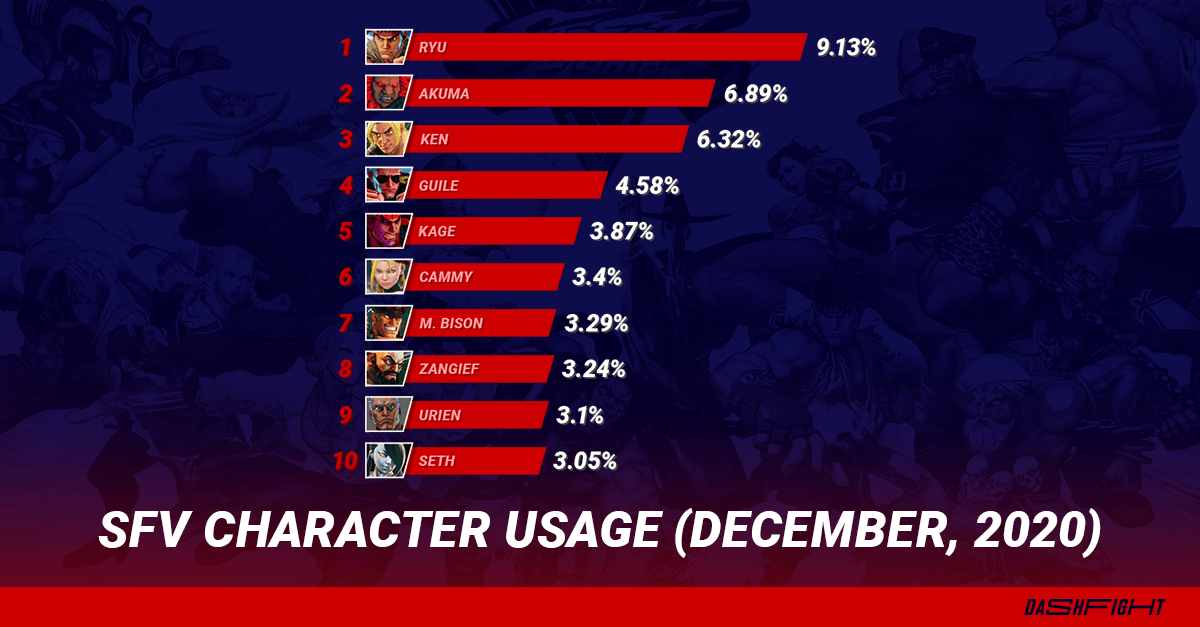 First of all Ryu - he is a leader every month, and a newcomer to the game can assume that this guy is the best fighter ever. This isn't true. The personality of Ryu perfectly represents the game spirit as a constant process of self-perfection. The downside here is that he always has a long way to go, so many other characters are objectively stronger.

Ryu is a rare fighter at professional competitions (such as Street Fighter League). But he is a very appealing character for beginners. Playing Ryu is a good way to gain basic experience and then move forward in the game. Consider selecting another main, but always be ready to meet Ryu in online multiplayer - he is still the most popular fighter.

Almost the same is true about Ken. This guy is often like a second choice for beginners. He is a kind of American form of Ryu.

But Akuma is totally different. He is really powerful, so many players recommend him as a good decision for improving SF skills even further or probably for playing him as your main. Akuma is usually in Top 3 with a significant difference over others.

Among the Top 10 characters, you can see the most popular fighters not only in the game but also at pro events. Guile is pretty straightforward, and still, he has notable potential (Guile is the main of Daigo). Seth is an often choice among professionals, but this is a difficult character to master. Kage and M.Bison represent the dark energy and evil powers - they are interesting for many players and effective in fights. Cammy is a beautiful and mighty girl, and you often can see Karin in Top 10 (she is the main of Punk).

With info about Ryu and Ken in mind, you can choose anyone from the top 10 and be sure in their fighting abilities. They might be not that good for your personal fighting style - but this is a different story. At least, you have to be prepared for fighting them.

This part of the statistics is for those who love to calculate stuff. Most players rarely go beyond checking out the average combat stats. And here they are from December 2020: 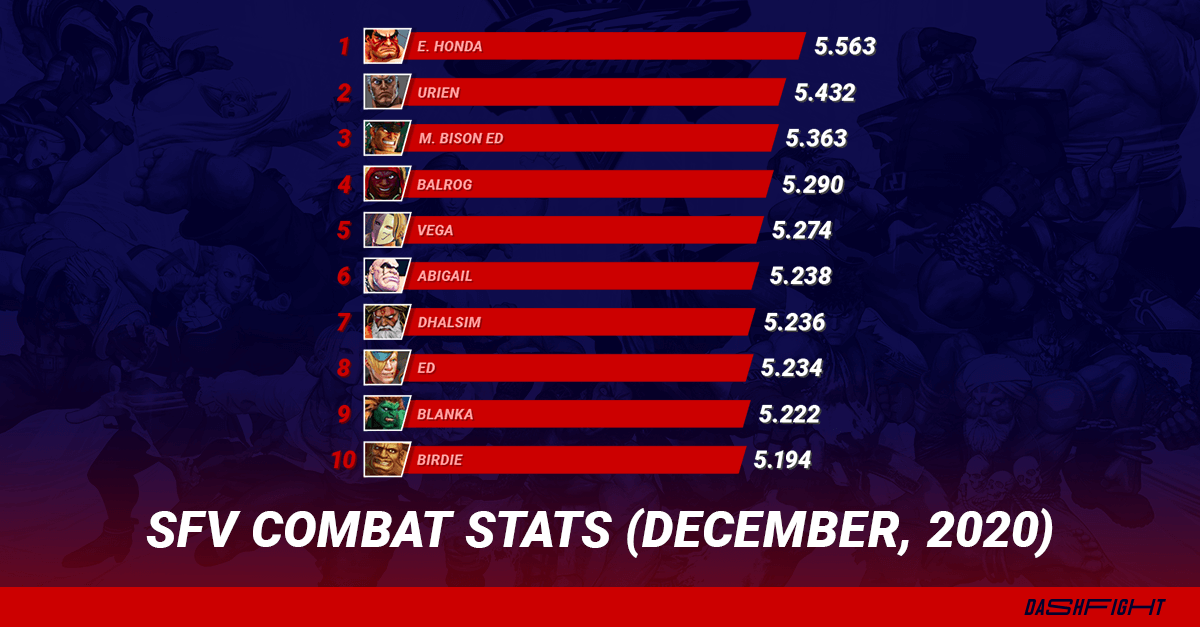 It’s easy to notice that the difference in numbers here is not that significant. If you like building matchup charts (such as this one for Karin), visit this page and delve into the detailed stats for each character. The information you may find interesting is who is the most difficult opponent for your main to practice against them more.

The changes in the win rates often happen after big updates, such as the upcoming addition of Dan Hibiki and other fighters of Season 5. Apart from that, these numbers are not very informative - you should stick to your usual practice regardless of slight changes in monthly win rates.

The fight for a spot in the list of top 10 players is very interesting - for those who want and really have a chance to climb so high. Usually, the process includes so much grind and effort that participating in it becomes absolutely exhausting and even frustrating.

We at DashFight sincerely congratulate WE-R1_trashbox on their success in 2020. And we would like to express our respect to each and everyone in Top 10 (or rather Top 100) - this is a tremendous work to achieve such results.

At the same time, most players will be much more interested in checking out their personal position on this page and seeing their progress in Street FIghter ranking.

Hoverwer competitive the game is, it still should remain enjoyable during the playing process. Fights between top 10 players are rather stressful - just imagine getting 1+M LP! Even those who have won Capcom Pro Tour events are not there. 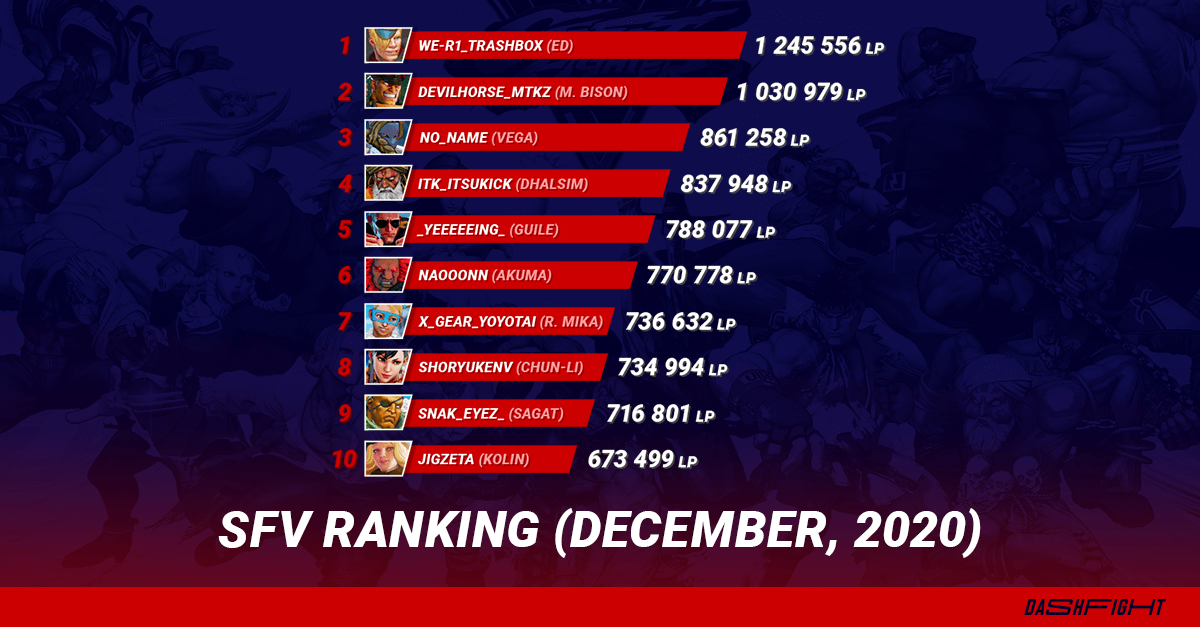 So, this is all we can tell about monthly Street Fighter stats. Have we missed something? Please, share your knowledge and opinion through Facebook, Twitter, or Discord!