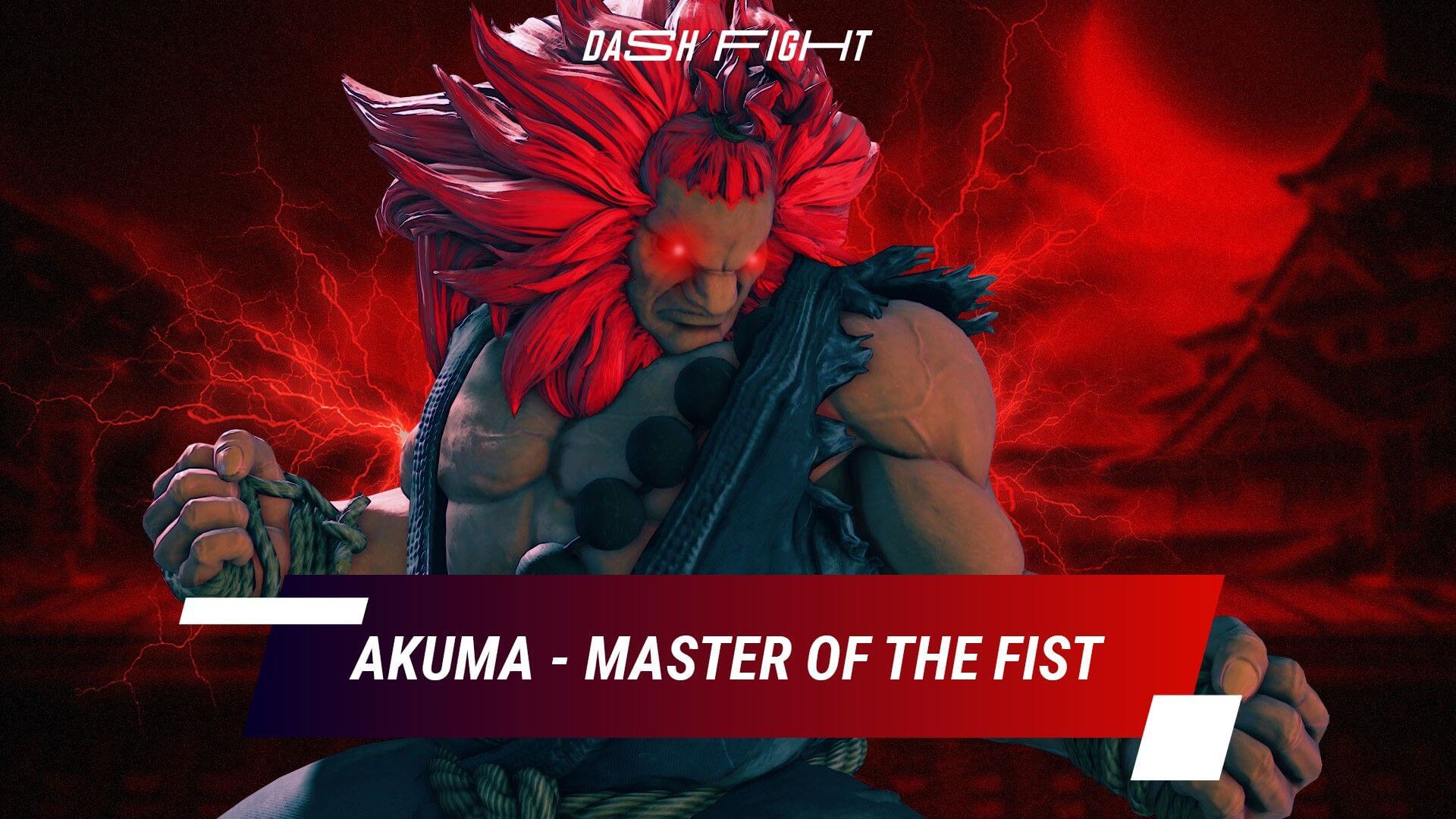 Capcom
Do you want to play Akuma in SF5? Are you preparing to fight this amazing guy and dream to defeat him?

Creating a background for fictional characters is such an amazing aspect of fighting games. Those guys and girls become something more than just images and tools to damage opponents. They carry some personal motivations, ideas on what life is, and desire to achieve some unique goals.

It is highly recommended to choose your primary Street Fighter character not only on the basis of their in-game abilities but also considering their personality. You should feel connected to the fighter even on the emotional level.

Attacks and moves of Akuma definitely can bring you many victories. This guy is great from the technical point of view.  But what about his story? Delve into it with this article on DashFight!

I am Akuma. And I will teach you the meaning of pain!

Once upon a time, a gaming magazine published a joke for April Fools’ Day - they mentioned a hidden character in Street Fighter II. The game fans wanted this to be real so badly, that the developers decided to add the guy. This is a story about creating Akuma.

He is strong and seemingly emotionless. The only thing he cares about is gaining power and reaching the level of perfection in the martial arts. Akuma is the master of the Shotokan fighting style, the same as Ryu, Ken, and Gouken. But unlike Ryu, Akuma uses the dark energy Satsui no Hado.

Someone may say that this guy is a bit evil. That was the intention of his creators. Still, Akuma is not in the same dimension of evilness as M. Bison. And he is not strictly speaking well. His obsession with training and self-improvement wiped out almost all human emotions. Akuma doesn’t care about morality in his motivation. He tries to defeat mighty opponents to become stronger. But sometimes he decides to protect vulnerable people.

Rarely you can see Akuma angry. And the moments when a smile touches his face are just legendary. The only person who managed to awoke his emotions was Kazumi Mishima from Tekken. Kazumi saved Akuma from an unknown danger and then asked him for revenge. In the story of Tekken 7, Akuma tries to kill Heihachi Mishima and then Kazuya Mishima.

Akuma has a younger brother - Gouken. They are rivals who try to defeat each other. The difference between them is similar to one between dark and light energy. Akuma blames Gouken for not allowing Ryu to open his dark side and thus blocking his full growth as a fighter.

Still, Akuma has some principles in his journey for power. He doesn’t want to become similar to Kage. You will never expect him to commit awful crimes.

The first appearance of this guy in the Street Fighter game series was in SFII. With specific circumstances, Akuma joins the final battle and confronts Ryu instead of M. Bison.

The fighting games community discovered a bit more about this guy from the Street Alpha series. These games tell the story before the World Warrior Tournament. It was the time when Akuma only started his practice with the dark energy, so in a way, we can see his transformation.

Akuma is traveling the world and looking for a worthy opponent. He fights Ryu, but this guy can’t really compete with Akuma - Ryu should gain the power of Satsui no Hado to fight Akuma again. He doesn’t plan to do so, and Akum is deeply unsatisfied with such a decision.

In Street Fighter IV, Akuma again tries to get Ryu as the disciple of the dark energy. He fights Gouken, while Ryu is unconscious after the tournament of Seth. Gouken saves Ryu, and Akuma returns to his training.

The story continues in Street Fighter V. Again, Akuma initiates a battle between Satsui no Hado and the light energy Mu no Ken. He wants to make Ryu a decent opponent, but the guy rejects the dark power.

Sometimes, the energy inside overwhelms Akuma, so he even changes his form and turns into a more powerful Shin Akuma. His personality does not really change - even in his normal state, Akuma is strongly affected by Satsui no Hado, but the fighting abilities of Shin Akuma are exceptional.

However strong Akuma is, you can’t underestimate the importance of regular practice. In fact, the default might of your character is always secondary to your personal skills. Train a lot to win many matches with Akuma - and DashFight will help you in this way! Take a look at our Street Fighter V Guide for Beginners.

Akuma was added to SF5 with Season 2, so you will have him even with the basic version of Street Fighter 5: Arcade Edition.

The game contains quite a lot of outfits for Akuma. Check out how to unlock them in this article about SF5 costumes of different colors.

For more fighting games articles and news, stay tuned to DashFight on Facebook and Twitter. Join our community of enthusiastic gamers on Discord.