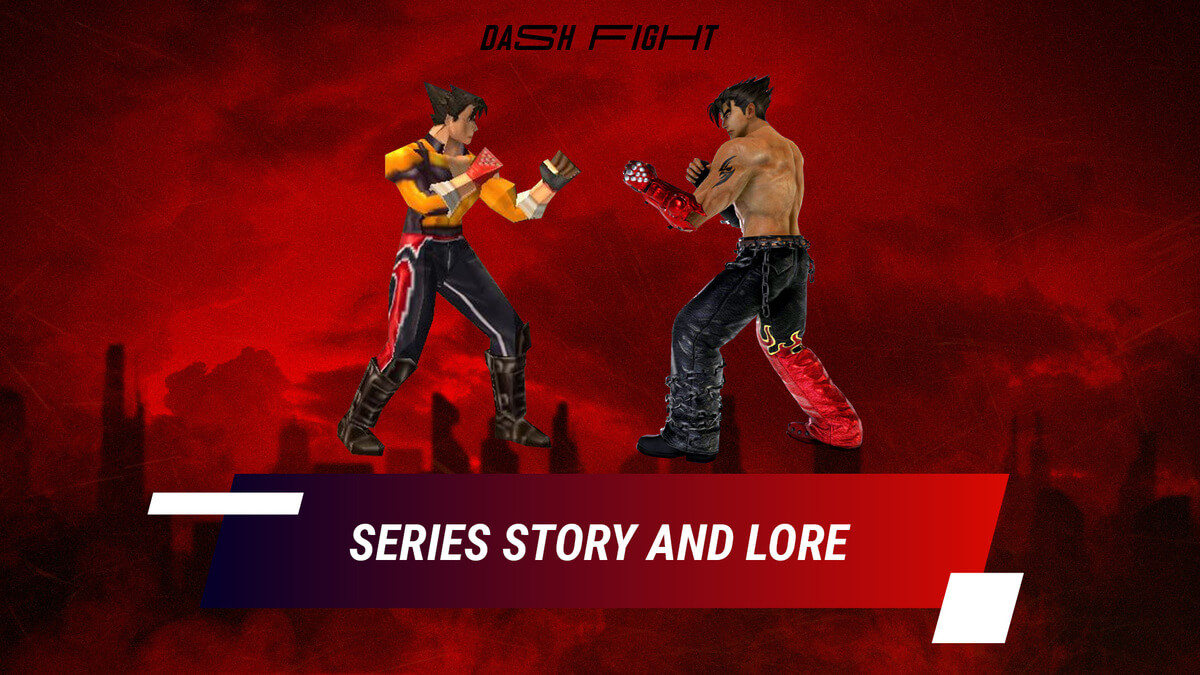 The first games of the Tekken series were created for slot machines and released in 1994. Soon it was ported to the first PlayStation. The sequels to Tekken 2 and Tekken 3 followed the same path in 1996 and 1998 respectively. At the same time, the third part of the game was also ported to the Game Boy Advance called Tekken Advance in 2001.

According to the leader of the development team and the founder of the series, Katsuhiro Harada, the experience of Street Fighter and Samurai Shodown was taken into account in the initial creation of this game. The developers were inspired by action films with Bruce Lee and Jackie Chan and some of the characters of modern Tekken 7 still resemble these legendary actors. Also, when developing Tekken, fights in the UFC were analyzed, which arose almost parallel to the Tekken series.

In 1996 and 1998, the series was developed in the form of Tekken 2 and Tekken 3. The third part of the series is considered the most popular in 2020. They have also been designed for arcade machine rooms and adapted for Sony Play Station.

In the late 90s and early 2000s, games from the Tekken series were released quite often. New battles rattled on consoles already in 2002 and 2004 when Tekken 4 and Tekken 5 were released. They were ported to a new generation of consoles - PlayStation 2.

We at DashFight speculated about what to expect in Tekken 8.

The plot of Tekken series

The first part of Tekken takes place in 1987. The head of the arms and financial corporation "Mishima Zaibatsu" Heihachi Mishima organizes the "King of the Iron Fist" battle tournament. Anyone who knows martial arts can participate in it. As a reward for luring fighters from all over the world, Heihachi offers as a prize his position as the head of the Mishima Zaibatsu corporation, a large sum of money, and the title of the best fighter in the world.

Having chosen a character, we enter the world of Tekken and begin the struggle for victory. Passing through the standings, the player meets a variety of opponents, each of whom has a personal motivation to participate in this. In case of success, the tournament organizer Heihachi personally becomes the last opponent.

After the defeat of Heihachi by the player, Kazuya Mishima becomes the head of the powerful transnational corporation. He throws Heihachi off a cliff but does not check if he died or survived as he did himself as a child. Kazuya runs the Mishima Zaibatsu Company with a heavy hand. He also learns that his father may still be alive.

Kazuya’s half-brother, Lee Chaolan, resigned himself to the role of number two, so he agreed to work as a security chief. Ganryu, Anna Williams and newly arrived Muay Thai champion Bruce Irwin go to work as Kazuya's guards.

Meanwhile, Heihachi hides in the mountains and hones his family karate skills. He seeks to regain power in the multinational corporation. To do this, he hires Nina to kill Kazuya.

Kazuya learns that Heihachi is alive and he announces the second tournament to lure him out of the hideout.

All the fighters from the previous tournament take part again and their goals have not changed. Also, new ones come.

Among the newcomers, there is another key character in the game - Jun Kazama. The girl works in the environmental police and went to the tournament with the aim of arresting Kazuya for animal smuggling. But then they fall in love with each other.

Heihachi gets to the final of the tournament. He manages to win and regain power.

After this Jun Kazama returns to Yakushima, her homeland, where she has a son, Jin Kazama.

Fifteen years have passed after Heihachi won. Heihachi got back his corporation. Heihachi is bored. 15 years after the events of the previous part, the indefatigable grandfather created a military special unit in the structure of the transnational corporation, which he gave the order to search for an ancient temple in Mexico.

Heihachi himself flies to the place and upon arrival learns that his people have been destroyed by Ogre. The head of the corporation then decides to capture Ogre in order to use him for his own purposes. The corpses of many martial artists are also found. Ogre is suspected of killing them.

In parallel to the showdown between Heihachi and Ogre, Jun Kazama, who lives in Japan, is raising her young son Jin. The boy begins to feel that Ogre is somehow dangerous to him. And shortly after Jin's 15th birthday, Ogre finds him and attacks. As a result of the battle with the enemy, Jin loses consciousness, and when he regains consciousness, he sees a destroyed house. He also cannot find his mom.

Before the Ogre attack, his mother asked Jin to come to Heihachi, who is his own grandfather, in case of danger.

Later, Jin goes to Heihachi, as his mother requested, explaining his situation. He asks to train him so that he becomes strong enough to take revenge on Ogre. Heihachi agrees and begins teaching Jin family karate. In parallel, he sends his grandson to study at the Polytechnic Institute of his corporation Mishima. After 4 years, Jin becomes a master of Mishima style karate.

Heihachi also hopes to find or lure Ogre away by organizing a new King of Iron Fist tournament. During the tournament, Paul Phoenix defeats Ogre in his normal form. Ogre then transforms into a giant beast and Jin fights against him. The young fighter wins and his opponent disintegrates into particles. Then there is an air raid on the battlefield, organized by the Tekken Force, led by Heihachi. Despite the ensuing destruction, Jin survives and flies away.

After fleeing from the scene of the previous part, hiding from Heihachi, Jin arrives in Brisbane. There he begins to study classical karate because previously he mastered only Mishima style.

In turn, Heihachi, looking for his own son and grandson, announces the fourth "Iron Fist" tournament. Jin arrives immediately to attend the event.

During the tournament, due to the machinations of Heihachi, all three representatives of the Mishima clan fight each other. This ends with the appearance of Jin's mother's ghost, after that her son Jin decides to end the fight and flies away.

In the end, Jin says to Heihachi and Kazuya, "Say thank you to my mother, Jun Kazama!"

In this part, another of the Mishima clan appears. But let's start with the beginning. After Jin has left, Kazuya and Heihachi wake up at the temple. They then face an attack by Jack-type cyborgs. One of them detonates inside the temple and as a result, the explosion releases Jimpachi Mishima who has been trapped in the dungeon. For a long time, he was out of society, so he was almost completely absorbed by evil. The next tournament is announced to kill him.

Jin Kazuya becomes the head of Mishima. At the same time, he combines two positions - the head of the eponymous yakuza clan (mafia) and the chief of the transnational corporation Mishima Zaibatsu.

After that, his personality gets worse and angrier, becoming very similar in character to his father's.

In the end, Jin Kazuya decides to declare his multinational corporation an independent state. After that, he starts a war with states for resources. The strike force of his corporation is the Tekken Squad. As a result of the actions of the corporation he heads, the Third World War begins.

In parallel, Kazuya becomes the unofficial leader of the Corporation G, which can oppose Mishima Zaibatsu. Kazuya arranges a bounty for Jin's head. In response, Jin actually announces the start of a new tournament.

Also, Jin's plan, as of the head of the Mishima Zaibatsu Corporation, is to create the worst possible situation in the world.

In this part, perhaps the most important thing is that the player reveals the story of Heihachi's acquaintance with Kazumi and the birth of Kazuya, as well as the reason for Heihachi's murder of his wife Kazumi and throwing little Kazuya off a cliff into the red-hot lava.

The story is told on behalf of a certain journalist who became interested in the history of the enmity of the Mishima clan after his family was killed during the war unleashed by Jin Kazama.

During Tekken 7, several events take place, in which the UN, Nina, and even the desert in the Far East appear. We at DashFight don't want to spoil too much about the newest part of Tekken. You can enjoy it by yourself.

Heihachi invites the journalist to a personal meeting and tells him that he killed Kazumi and threw Kazuya off a cliff into the red-hot lava due to a devil gene that was passed on to his descendants from the Hatijou clan, to which Kazumi belonged. He described the events when Kazumi, possessed by the devil's genome, came to the dojo to kill him, but loses to him in a duel and he kills her devil form. After the story, Heihachi orders to arrest the journalist, since he knew that the journalist was friends with Lars and was plotting revenge.

Heihachi and Kazuya meet at the volcano in a long final battle in which Kazuya kills Heihachi and throws him off a cliff into the volcano's red-hot lava. The journalist finishes writing the story and publishes it. After the credits, Jin wakes up and meets with Lee Chaolan, Lars Alexandersson, and Alice, promising to end the war after defeating Kazuya.

We can recommend for you special guide How to Play Tekken 7, if you are a freshman.