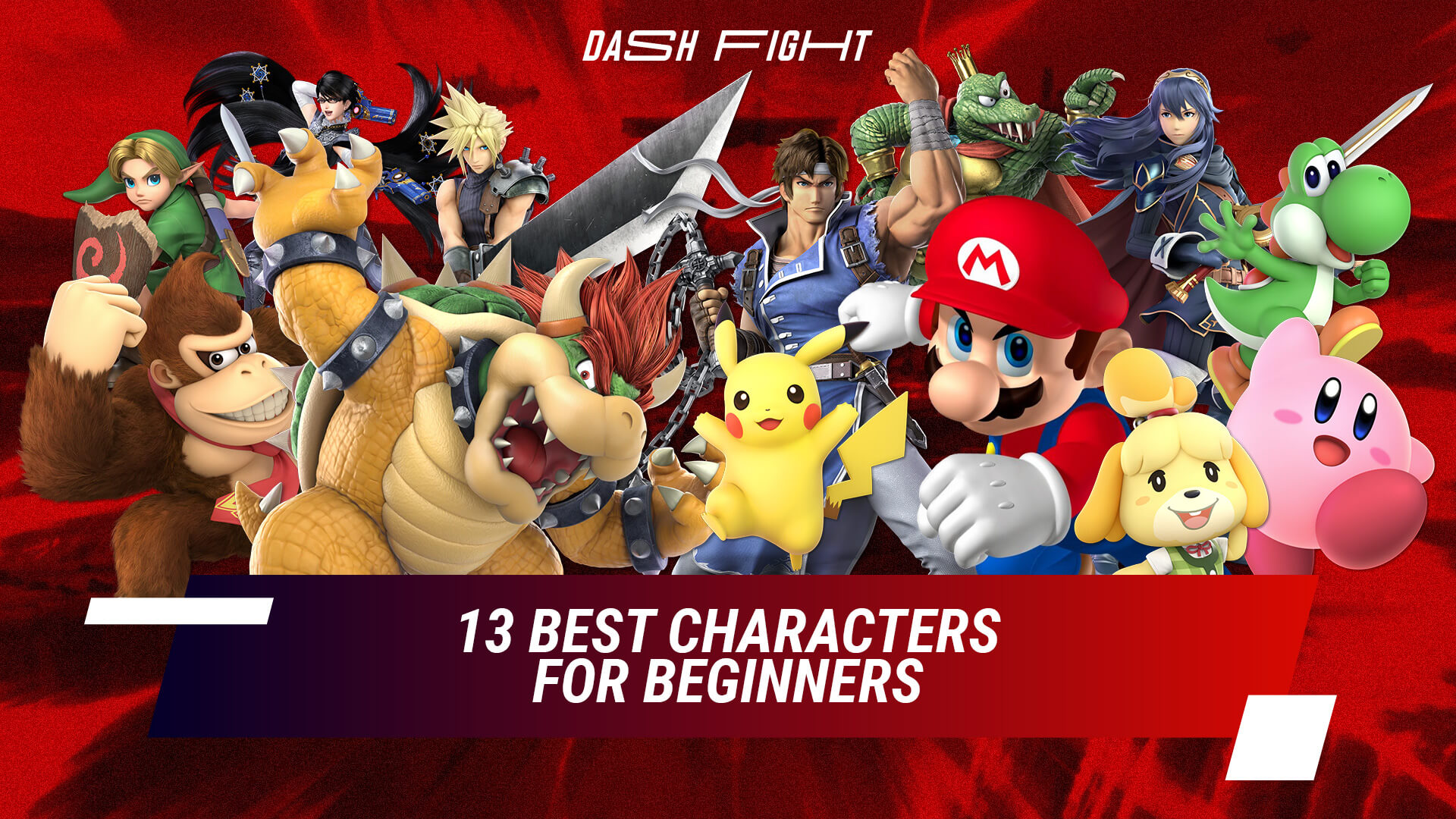 Nintendo
#Guide#Longread
A list of fighters who can help you to get acquainted with the game and start developing your playing skills.

Super Smash Bros. Ultimate offers amazing accessibility - just jump into it with no prior experience and you still will be able to enjoy fights and even get some victories (but rather not in multiplayer). The initial period is quite significant! You need to get the max fun possible to feel motivation for moving deeper into the amazing fighting mechanics and opening almost countless possibilities. And also, you need to find your perfect style, a niche where you could grow as an SSBU player and get high Global Smash Power.

There are different attitudes in approaching the game. Many players just pick a fighter they like the most. Others randomly select characters while looking for the most comfortable especially for them. One of the most effective ways to start your experience is to choose someone from the best Smash characters for beginners and feel the excellence of power without learning complicated tricks.

We at DashFight welcome all the paths that lead to the SSBU excitement - it’s only up to you to decide which is the best. Still, we think that selecting those characters who are suitable for beginners is a very clever idea! You can pick one from our list and instantly find your best guy / girl / creature. Or probably it would be better to give all of them a chance - Super Smash Bros. Ultimate beginner characters from this post represent different fighting styles, so you can explore the game just moving through this list.

This is arguably the most versatile character in Super Smash Bros. Ultimate. Mario is a mascot of Nintendo, so the development team made him the best beginner Smash character.

Mario has very good basic attacks that make him effective in close- and middle-range fights. He can deal with projectiles of the opponents and shoot his own fireballs. His speed and strength are not jar-dropping but they are still pretty decent.

This pink creature is not that powerful in fights but Kirby still gives players something other fighters can’t even dream of - an excellent recovery option.

It's very common for beginners in Super Smash Bros. games to feel frustrated because of getting launched off the platform and having no chances to return. Some players fall into the abyss after their own mistakes and lose with low damage percentages. It’s hard to do so with Kirby and their 5 jumps and very effective Up Special.

Kirby also has something interesting in the fighting arsenal. The whole moveset is quite strong, and the Down Special is a very dangerous Stone Attack that can damage a few opponents at once.

Do you like playing villains? Then Bowser is a very good choice. He makes a break in the hobby of kidnaping princesses for another exciting activity - you know, fighting everyone in the gaming Multiverse (including those princesses).

And Bowser is super effective in these fights. Just look at him! He is a strong massive creature. Do you want your hits to make an impact? Play Bowser, the most powerful among Smash Ultimate best beginner characters. Just come close to the opponent, perform Jabs and Forward Tilt, and launch the victim with super cool Side Special.

It’s had for opponents to launch Bowser, but if they do so, the King of Koops will have difficulties with returning to the ground. This is a downside of his size.

Even if you aren’t really into the Pokémon franchise, you have definitely seen somewhere this little yellow cutie. Just look at his adorable face! Pikachu is a very dangerous creature despite the appearance. You touch them and a deadly portion of electricity comes through your body. Such ability makes Pikachu very effective in Super Smash Bros. Ultimate fights.

Landing some individual hits may be difficult for beginners. But what about spreading lightning all over the place, so no one can hide from them? Pikachu can do this with his Down Special. This attack makes the Pokémon super threatening in mass fights - someone is distracted by other players and then gets the damaging lightning.

Other moves and attacks of Pikachu are also quite effective. The electric mouse is small, quick, and has good recovery options. With them, you will learn the advantage of constant fast movements on the stage.

These Smash Ultimate beginner characters are very good for learning the art of distant fights. Both heroes of the Castlevania game series know perfectly well how to keep danger away - thanks to their whips and throwing cross and axes. These attacks are quite effective, and if you manage not to come close to opponents, they will struggle to deal damage to your Simon and Righter.

These guys are Echo-Fighters, so their movesets are very similar. Still, Richter is simpler - his whip damages with the whole length (not only with the tip as in the case of Simon).

The downside of these guys is their tricky recovery. They perform Uppercut as Up Special, and it’s not very good for returning to the platform. But you can use the whip for this - take you time to learn this feature. Pay proper attention to Down B. The Holy Water is quite dangerous for opponents.

This girl came from the Fire Emblem franchise, where heroes know how to fight. Lucina uses her sword rather straightforwardly. Just swing the weapon and hit the opponents - nothing really tricky in her moves.

Still, these sword attacks are very effective, they deal a lot of damage. And general characteristics of Lucina are nicely balanced. Consider also trying out her Echo Fighter Marth.

Here we have another popular Nintendo character that got significant power in Super Smash Bros. Ultimate. Donkey Kong is a fast and strong ape, trained well in the challenging original platformers. His hits are powerful. His Up Special gives an easy way to return to the ground.

Although Donkey Kong is not that big as Bowser, it’s hard to launch him into the air.

He is not just another sword character - he is a guy with that amazing huge sword, which became almost the same iconic as his hairstyle. Cloud is good for fighting at a mid-distance. He is very fast to avoid slow but strong opponents. And his weapon deals very good damage.

You can get many victories with Cloud, and this character opens many possibilities for self-improvement - he is good at the basics and he is good with some tricky fighting combos.

This green dinosaur doesn’t look like a powerful fighter, but Yoshi has quite a few tricks in his… pocket.

Basic attacks of Yoshi have a surprisingly big range thanks to extendable head and feet. His shield gives exceptionally good protection. Long jumps allow reaching distant spots or moving away from danger.

Many players consider Yoshi a bit complicated. His moves weren’t easy in the previous installment of the game, but now he is one of the best Smash Ultimate characters for beginners. You can start using Yoshi with no experience and then realize his tricky abilities and add them to your playing arsenal.

The brave hero of Hyrule takes different forms in The Legend of Zelda games. In Ocarina of Time, Link starts as a young boy and then… fuh, I stopped myself in time from writing another thousand words on that amazing game - just treat yourself to this experience to know more about Young Link!

In SSBU, this guy can use two fighting styles. With his arrows, boomerang, and bombs, Young Link fights effectively at a big distance, so beginners should learn the art of keeping the opponents away. Then, when the damage percentage of your victims becomes high, come close to them and use the sword.

Toon Link (from The Wind Waker) is very similar - you can choose any you like more.

Another small and quick fighter on our list is Isabelle from Animal Crossing. Usually, she isn’t involved in fighting and keeps herself busy with lots of other activities, such as fishing. But in Smash Ultimate, Isabelle manages to use all those skills to deal damage and launch opponents.

Her fishing rod is a very good tool for grabbing opponents and then attacking them. Learn how to use it - catch the victims as fish in a lake. In this way, Isabelle can stay at a relatively safe distance and then destroy opponents.

Also, her recovery options are worth mentioning. Isabelle uses her balloon, she has a nice Up Special, and (again) she can use the fishing rod.

For better or for worse, Pit is far from trying to fly as high as the sun in the sky. That is to say; he is not competing for the best character in Smash. Nevertheless, he is a good zoner character with a healthy mix of projectiles at various distances that can give you a feel for what spacing is like in Super Smash Bros Ultimate. His recovery is also remarkable, allowing you to make a few mistakes here and there but not be punished for them as much as you would with heavier characters or characters that lack aerial mobility.

All in all, give the winged angel and its dark counterpart a try! you might learn a thing or two that will certainly help you hone your skills and instincts in the game.

In the original games, Bayonetta spends most of her time fighting. And this experience makes her one of the most powerful characters in Smash Ultimate! She uses lots of various attacks: punches, kicks, and shoots from the pistols.

Bayonetta is good at long and close-range fights. Her Special Attacks are super powerful and may bring you many glorious moments.

It would be nice to give many of these characters a chance in Super Smash Bros. Ultimate. You will be able to understand what is possible in the game and what is suitable for your personal style.

Don’t limit yourself to one only type of fight. The more SSBU game modes you try out with these characters for beginners, the more shades of the game mechanics become obvious for you - to come up with strategy ideas and utilize unique combos.

You can stick to these characters or take someone else from the huge roster of SSBU. What about playing someone new to the game, such as the DLC fighter Steve from Minecraft?

And the last advice - however easy, versatile, and balanced a character is, everything of this doesn’t matter if you like someone else. The game should be fun, so enjoy it with your own rules!

For other SSBU guides and interesting news, stay tuned to DashFight on Facebook and Twitter! Joining our community on Discord!