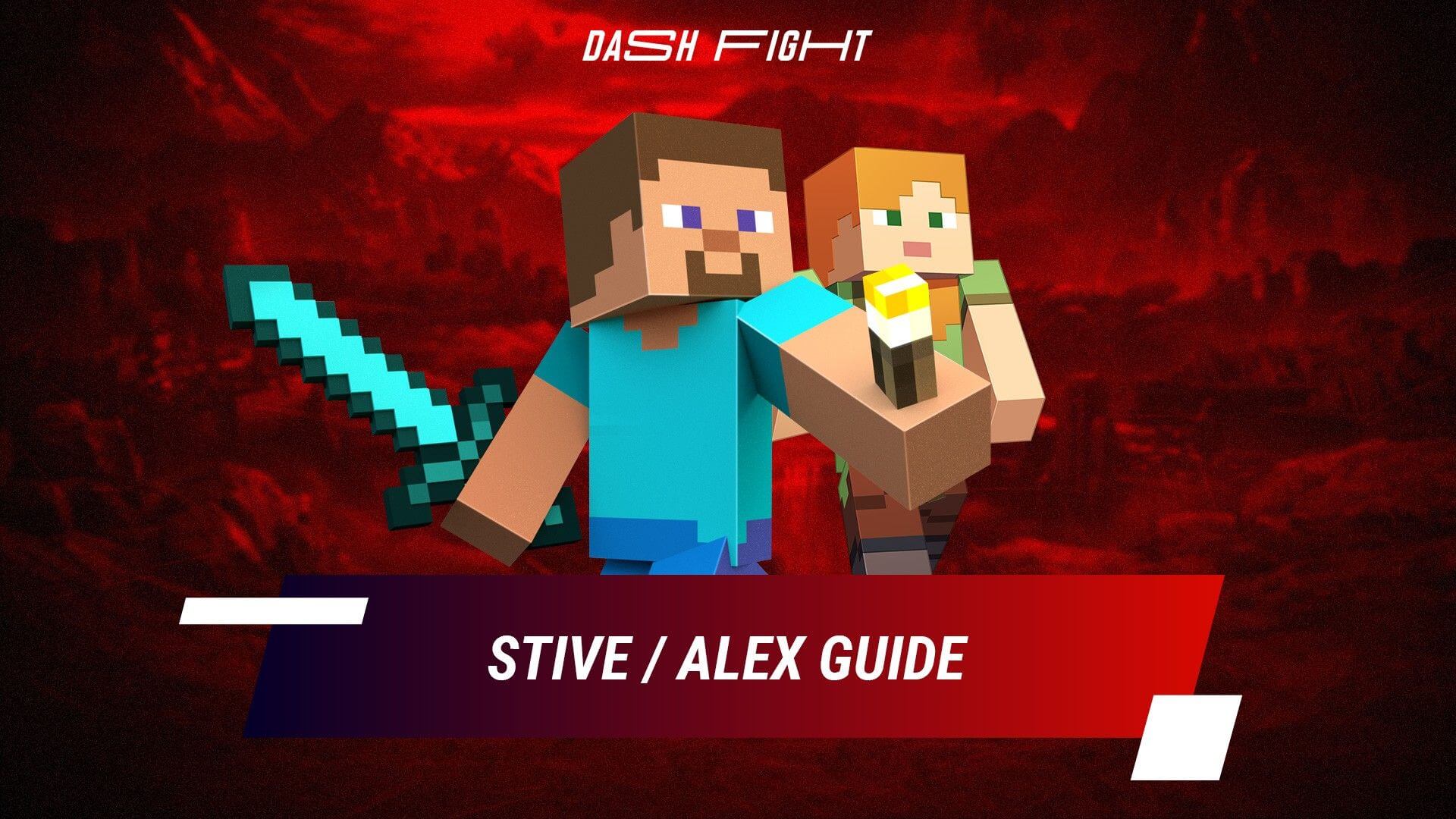 Nintendo / Mojang
#Guide#Evergreen
Blocks to create, resources to mine, and TNT to explode

Each new character in Super Smash Bros. Ultimate has the power to change the whole experience for individual players and even for the professional esports scene. But Steve and Alex from Minecraft feel like a bomb - they broke into SSBU and brought so much content that this addition affects all the other game stages and those players who don’t plan to play Steve or Alex.

The initial presentation of Minecraft heroes in Smash Bros was short. Probably, Masahiro Sakurai wanted to give us time to digest this reveal. Then, we got a long video with a detailed explanation of all the Minecraft features in Smash Ultimate.

We at DashFight are glad to dig deeper into the abilities and moves of Steve and Alex (and Zombie, and Enderman) - it’s always so exciting to meet a new SSBU character! With the Minecraft heroes, Super Smash Bros. Ultimate has 84 fighters.

The world of Minecraft

This is one of the most popular games in the world. In fact, Minecraft is an amazing phenomenon, absolutely unique for the gaming culture. It invites players into a weirdly looking blocky world - you will not find here polished graphics and realistic forms. Low resolutions and square creatures have become a distinguishing feature of Minecraft.

It has two primary modes that describe the playing experience. In Survival mode, the hero has limited resources and should collect various blocks to craft new tools and new materials. In Creative mode, players have unlimited access to all the blocks and items - create whatever they want.

Both modes don't have clear goals, and still, players spend many hours in them. You can try and defeat the mighty Dragon in another dimension of Survival. Or you can build a huge map alone or with a team of like-minded people.

Many modifications, the possibility to strongly improve graphics (turn on Ray Tracing), and lots of multiplayer servers support the high interest of the gaming community in Minecraft.

Steve and Alex continue the tradition of SSBU to transfer lots of original mechanics to fighting (for example, we saw this with Cloud and his Limit Break from Final Fantasy VII). Smash has got lots of Minecraft features. Understanding them properly is key for success while playing these guys.

Using weapons is crucial here. And to get a good sword/pickaxe/ax, you should mine resources at each free moment. SSBU stages give different blocks and you should figure out where to dig for the best materials - only playing experience can give this info, so take Steve or Alex to many stages of Training mode.

Still, it’s better not to ignore simple resources, such as dirt and wood. They can be used for creating blocks. This feature can open some very interesting strategies, and it’s nice to not waste precious stone/iron for this purpose. You can create blocks even outside the primary ground to avoid falling down, but the game gives this possibility only at some distance, and the further you are, the faster the blocks disappear.

Notice how low the first jump of Steve and Alex is. You can perform a mid-air jump and it will be higher. And you can create a block to stand on it for a while.

Basic Attacks of Steve and Alex in SSBU

Time is needed to discover many possible combinations of attacks and moves of Minecraft characters in Super Smash Bros. Ultimate. Arguably the best way to do so - is to delve into the game and experiment with these characters. But of course, it’s also a good idea to check out the experience of other guys in the community and take their ideas and discoveries into your game.

On DashFight, we have already posted some dirtiest Steve tricks - feel free to check them out.

Here, we invite you to take a look at a few other quite effective combos:

Up Tilt - Up Air - Forward Air

Down Throw - Up Smash

These are just examples and the basics for your own fighting creativity.

One of the first things discovered by players is how good Steve is at ledge trapping. You need to place a TNT block at the edge and a few blocks outside the platform to make an obstacle for opponents.

Another interesting option is to create blocks outside the ground, stand on one, and use Forward Air when the opponent tries to recover.

It turned out that the magma block is one of the most effective attacks of Steve. You can damage opponents easily if they stay on the platform above the Minecraft guy. Also, you can launch them and then create the Magma block.

You can expand this combo

Many SSBU players start Steve combos with Down Throw. If you have iron, use this powerful trick to launch the opponent into the air and continue with the Up Air - Neutral Special - Up Smash stuff.

With a high percentage, Down Throw may be enough to KO.

It seems like playing Minecraft Steve and Alex will be so much fun! Are you excited? To get prepared, take a look at our basic SSBU guide for beginners.

Minecraft heroes are available with Challenger Pack 7 for $5.99. They are part of Super Smash Bros. Ultimate Fighter Pass vol. 2 that costs $29.99 and contains other 5 fighters. Take a look at this post to check out all Smash Ultimate characters!

For other Super Smash Bros. Ultimate articles and news, stay tuned to DashFight on Facebook, Twitter, and Discord!