Now in the Grand Tournament, Munin uses it to win new and beautiful belongings to add to the never ending collection. Winning a mountain of priceless gemstones, rare beads from each of the nine realms, and color bits of string. Munin and Kaya use them to make friend bracelets together.Know more

How to Unlock All Characters in Brawlhalla 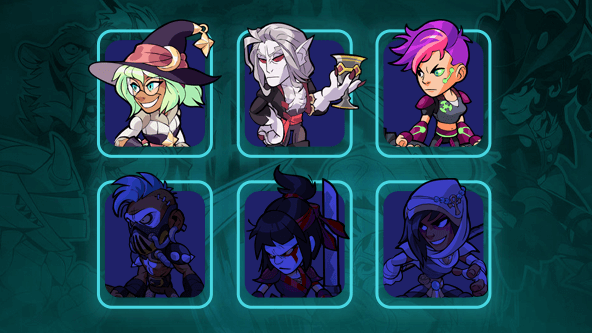 How to Unlock All Characters in Brawlhalla

From Val to Rayman, find out how to earn every Legend in the game, whether using Gold coins or packs.

The Elder Saga had once said "Hugin and Munin, the ravens of Odin, watch the world with lofty detachment."

Munin has a day job where she flies across the Nine Realms of creation to scout, relaying all information of her sightings to the King of Gods, Odin himself. Knowing if she finished her scouting by at least 5:30, Munin can make it to her band practice on time. She’s been doing this routine since the Midgard Serpent was only just a tadpole, now being both very well and more importantly, able to shred on guitar.

Something Odin used to fear were the terrifying dangers Munin could encounter on her journeys, always worried that one day she’d leave and never return. That was until he witnessed her completely destroy the ice giant Mjolda with a single power chord. Munin had combined her powerful music into her fighting capabilities, creating a very horrifying and versatile fighting style. Her power ballad, known as “The Last Sentai” single handedly made an army of charging trolls collapse onto the ground and be drawn to tears, the army was only even there because she accidentally performed her classic folk metal song, known as “Summon the Trolls.” Sir Roland himself had even made a song about the very one Munin used to completely wipe him out in one of the tournament semi-finals. It’s safe to say Odin’s opinion has changed and he no longer worries about Munin.

Munin is a big admirer of variety, new styles, and of course shiny objects. Her and her sister Hugin are currently the Agardian glam rock duo, named Ravenqueen. Also known previously as Winged Mayhem, then the Chorvyds, and then the Crow Mountain Sisters when they went through their bluegrass phase.

Now in the Grand Tournament, Munin uses it to win new and beautiful belongings to add to the never ending collection. Winning a mountain of priceless gemstones, rare beads from each of the nine realms, and color bits of string. Munin and Kaya use them to make friend bracelets together.

Munin wields the Bow as her primary weapon and the Scythe as her secondary weapon.

Scythe is a rounded, sharp blade with a long handle, used for close-range fighting and provides accurate control over the opponent.

The Bow is a weapon greatly suited for aggressive attacks and pressuring your opponent; its hitbox is small but makes up for it with its high damage and quick attacks.

Munins stats for the most part are average or above, with her defense being her lowest by a slight margin to her average strength. Munin shines in her higher dexterity and excellent agility.

Some Other Legends with Bow

Some Other Legends with Scythe