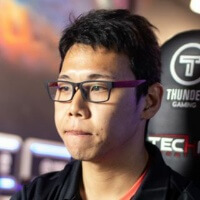 He's also one of the best Banjo & Kazooie players in the game and has taken sets from pros like MkLeo, Cosmos, Dabuz, and Tweek in the past. Ranked 17th on the Fall 2019 PGRU and 8th on the Japan PowerRankings, Raito was signed to Candee on April 2018 but eventually left and joined Thunder Gaming in October 2019.