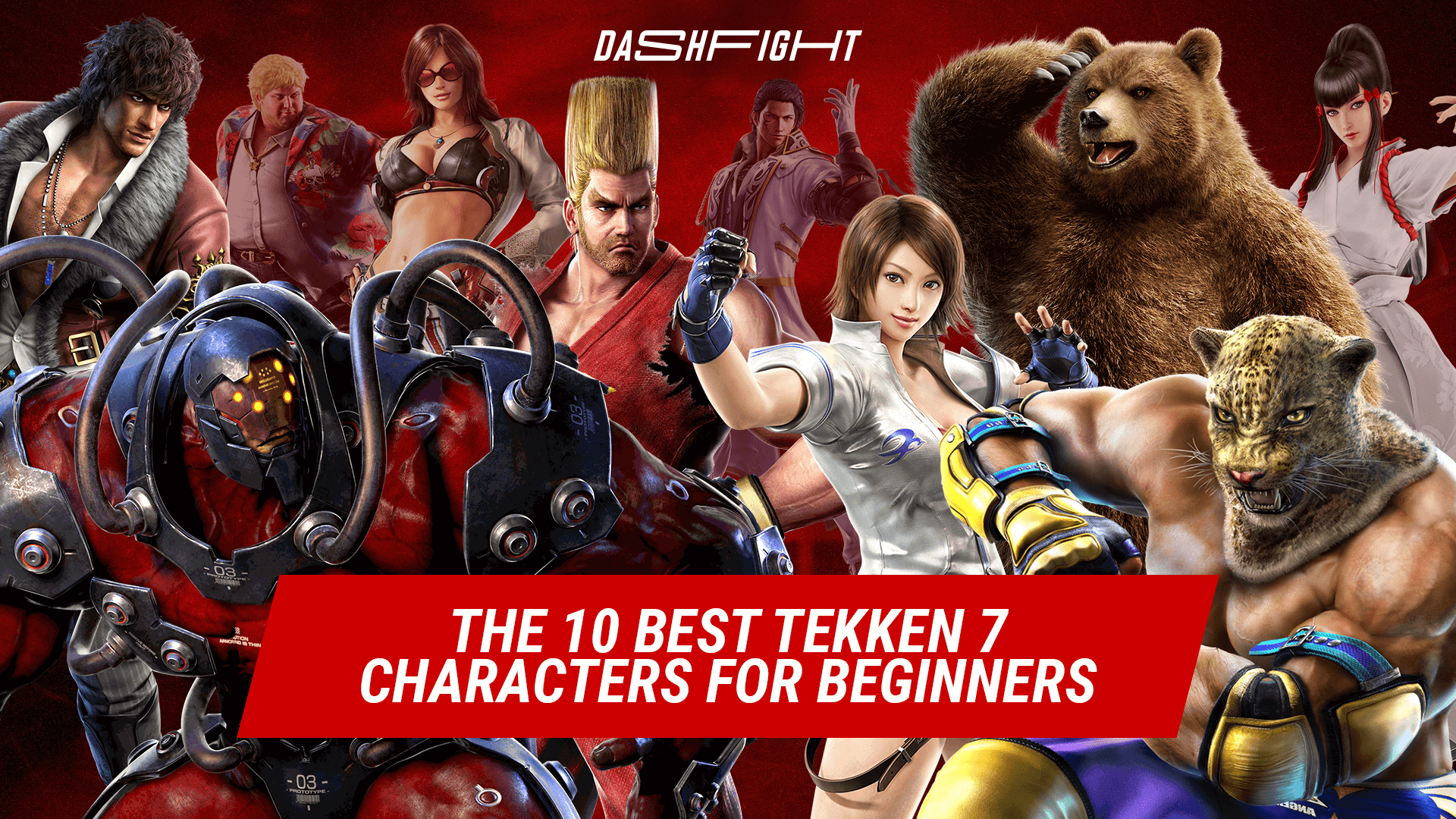 The 10 Best Tekken 7 Characters for beginners

#Guide#Evergreen
Who in the game roster will help you to understand the mechanics and enjoy sweet-sweet victories from the very start of your Tekken journey?

The first steps in fighting games are crucial - they should lead to the excitement of early victories, demonstrate the depth of mechanics, and keep the motivation to move forward. Those first steps include lots of stuff, and choosing the right character is one of the strongest factors for making quick progress and having a lot of fun.

Tekken 7 is perfectly accessible. It allows absolute beginners even to win fights with button-mashing (Don’t! Don’t do that if you want to feel the real joy of a fighting game). But at some point, you may face obstacles to internal development. The opponents are too challenging, and getting better Tekken 7 ranks becomes a super hard task. Probably, it’s time to take a step back and reconsider your main character.

And here is a guide to help you make this decision. It contains the best Tekken 7 beginner characters and some pieces of advice on how not to blindly take anyone from the list but allow yourself to grow as a player.

And let us start with a super tip from a professional Tekken player.  Vincent "Super Akouma" Homan shares his opinion on this topic with DashFight readers. It’s worthy of your attention:

Make your own perfect choice

Tekken 7 has 50+ characters in the roster, and all of them are pretty different. Choosing those you like the most is the best way to build an emotional connection with the game universe and then spend a lot of time with your fighter - practicing and playing many-many matches.

Some players feel like choosing a character who, in a way, resembles their real-world personality. Others prefer becoming someone else in the virtual world of Tekken, or they choose such a fighter who they find interesting and even attractive. The game has so many options, so how can we take a glimpse of them all? Here is the plan!

These three steps will take some time - but no worries, those hours will be pretty joyful (and yeah, you can skip that overpowered Akuma at the end of the story mode and return to him later). The achieved result will be having a subtle impression of all the characters: their personalities and what they are capable of on the fighting ground.

And then - check out the list below, which contains the easiest characters in Tekken 7. They all are accessible and allow winning without frustratingly long practice. At the same time, they are strong enough to help you feel the power on your fingertips and immensely improve your playing skills. You already know who you like more, so choose anyone. And feel free to change your decision - finding your style is quite a process.

Also, feel free to skip accessibility and jump directly into the top-tier fighters. The hardest characters in Tekken 7 for one player are the easiest for another. The main question is still “Who do you enjoy the most?” (yep, check out that advice by Super Akouma again, please)

The 10 Best Beginner Characters in Tekken 7

You may remember her well during the story mode - that annoying tiger is pretty tricky for beginners. So why not take the cat to your crew? But let's keep the tiger aside and focus on Kazumi! She is effective in offense, thanks to her quick and strong pokes. This type of attack will be basic for beginners as it’s easy to execute and easy to link in combos.

This is a classic wrestler, with effective powerful throws. You can easily call King a grappler - and use this style in your game.

His moves have impressive animation and deal good damage. Check out his kicks and try to link them into each other.

King is good at punishing opponents. He can do it even from the mid range, thanks to his quick rushes.

You might need some time to get used to controlling King. The reward for your effort is a great power! Invest your time in practicing throws, and you will be able to make miracles in the matches.

He is a simple offensive character with many situational moves. The attacks of Miguel are fast and damaging, especially his pokes, and they can be easily linked into combos. That speed and power can make opponents panic (mostly your fellow beginners)

It might be difficult to predict what Miguel will do, and you will have a good arsenal of different moves to react to the moment. Some prior experience with the game and the fighters will help you to be more effective with Miguel. It’s easy to get his experience just playing the guy.

It’s a character for the offensive style. Katarina deals big damage, and her attacks are easy to execute. The downside is the high possibility of getting punished.

Pick up Katarina if you are willing to take that risk but have a chance to burst your fighter with the explosive power. Try and focus on high kicks - her hopkick is awesome. Avoid low kicks not to create openings.

Katarina has a very good range of attacks, so you don’t have to bother with proper positioning. You can use mostly kicks and link them to super simple, still effective combos (someone would say spamming kicks).

High risk / high reward characters, such as Katarina or Paul, are very good for beginners because on this level, your opponents still can’t punish properly. When you face more skilled opponents, the situation changes and instead of dealing enormous damage, you get it.

This guy is surprisingly quick as for his size, so he can approach opponents with almost lightning speed and start the close-range fight - and that’s the best option for Bob.

In general, Bob is a Tekken 7 good beginner character, thanks to his versatile abilities. You can use his rushdown power, but other fighting styles also can be rewarding.

Attacks of Bob deal considerable damage - probably, thanks to his weight. They allow starting combos quite easily and have the potential to punish. And yes, when Bob uses his whole body to attack opponents, it’s almost unstoppable might.

Long, strong arms give Gigas excellent grabs and powerful attacks. Use him if you like the rushdown style - to come close to the opponent and pressure them with the stream of attacks. His Rage Drive is very impressive. Still, Gigas can be good at defense by keeping the distance.

Unlike other Tekken 7 easy characters, Gigas asks for some initial practice to get used to his features - strictly speaking, he is not pick-up-and-play. The advantage of Gigas for beginners in Tekken 7 is his short, devastating combos. You may find it helpful to have a short list of moves.

She is a defensive character and has reached a super high level in this fighting style. Asuka is an excellent choice if you like to stay safe and avoid unnecessary risks. The downside for her is low offensive abilities. You should find a proper moment to start landing blows.

Asuka Kazama is very good at keeping opponents at a distance - her long-range kicks are very effective. Attacks of this Tekken 7 character are straightforward, so beginners can easily master them. Asuka has quick moves to use under pressure and punish her opponents.

This character has very dangerous attacks in his arsenal, able to deal huge damage. Just try out his hopkick and experiment with it as a combo starter. While the basic moves of Claudio are easy to execute, his special power-ups in the Starburst state can be a bit tricky - you need to remember the consequences of moves (that’s true for many other beginner characters, though).

Claudio Serafino is very good at mid-range fights. His style can be both defensive and offensive. Pick up this guy if you like seeing your fighter bursting with great power and destroying the opponent for a short period.

You can play Paul both offensively and defensively. He deals great damage with basic attacks and easily links them into each other. If you catch momentum, you will be able to destroy the opponent.

At the same time, it’s a 50/50 character, so you should expect punishment for his effective but risky moves.

Playing Paul is perfect for experiencing the power in Tekken 7 and getting many victories on the beginner level. The more you progress in the game, the more skilled opponents you face, so playing Paul will not be that easy. But at the same time, you open the depth of this character and still remain competitive.

And of course, taking the bear into your fight is such a fantastic experience - it almost defines the feeling of playing Tekken. Kuma is big and strong. His jabs reach a long distance and damage nicely. Then you can try and link other attacks, which give you the freedom of creating simple combos.

Kuma and Panda are similar to each other, so you can pick up any of them. Good effectiveness in fights and the hilarious style of… you know, playing the bear make both interesting for beginners in Tekken 7.

Sticking to one main character in a fighting game is a great idea to master their abilities and know lots of slight features perfectly well. But don’t make the decision on your main too early. Easy-to-play fighters make up a small part of the roster, and when you feel ready, you would want to increase the Tekken 7 characters difficulty and let your improved skills get more effective fighting tools.

Meanwhile, take another piece of advice - enjoy the game! Really guys, being a beginner has obvious downsides, but let’s not forget about the advantages. You don’t have to fill your brain with too complicated stuff - you learn while playing and can do this in the relaxing, goofy, spontaneous, or any other way you want to. Keeping that joyful mood is the key to all the following success in Tekken 7.

Would you like to share your opinion on the best Tekken 7 characters for beginners? Check out the DashFight Forum to start/join the discussion. And take a look at our Discord server, a place for enthusiastic players to gather together online.