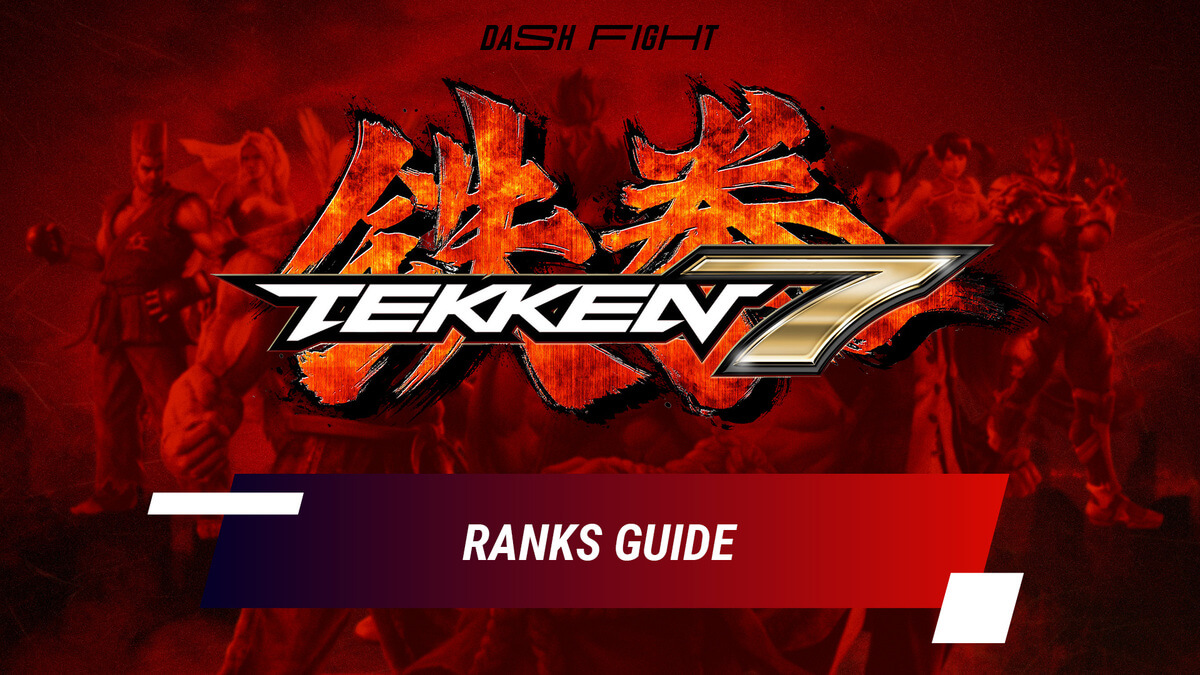 Bandai Namco
#Guide#Evergreen
While you grow as a fighting gamer, the ranking system proves your exceptional skills

Fighting games are all about the competition. In Tekken 7, we compete even in the Story Mode and Offline Battles (not always with CPU but rather with ourselves, with our laziness and resistance to learning new skills). Then, the proper competition begins, and players enter the fascinating area of multiplayer fights. Each one tries to defeat their opponents to taste that sweet victory. And the competitive spirit is not limited to individual matches - while playing, we fight for better Tekken 7 ranks, trying to become the best of the best.

Do you also feel the excitement of seeing your in-game progress not only through improving your skills but on the measurable Tekken 7 chart list? Then this article on DashFight is exactly for you - let’s discuss all the Tekken ranks to properly understand this a bit complicated system and know how to get a better Tekken 7 rank.

But before bothering with the ranking, the beginners in the game should learn the fighting basics. Our guide on How to Play Tekken 7 may be very helpful!

Some players make a bitter mistake that can spoil their experience in Tekken 7 - they rush into online matches without developing their skills with CPU opponents. As we recommended in the article Tekken 7: All Game Modes Explained, it would be better to start with the Story Mode to get the general understanding of the game atmosphere and then learn how to fight effectively in the Practice Mode and Arcade/Treasure Battles. Thus you will start getting your first Tekken 7 ranks - for the Offline Battles.

The more you win Arcade or Treasure Battles, the better your rank becomes. Matches here are not too difficult (at the beginning), so most players quickly get promoted.

Promotional matches happen after a few victories in a row. Pay attention to the special bar in the low right corner of the screen - it clearly shows your position in the Tekken 7 ranking system.

In the offline Tekken 7 rankings, you start with the lowest rank 1st kyu. Try to bring your fighter to as high a rank as possible. For this, learn their various techniques and use them in practice. Experiment with attacks, moves, and combos. Think outside the box to destroy your AI opponents and then… and then consider taking another fighter and starting the same journey from the very beginning.

Increasing the offline ranking in Tekken 7 may seem not that important. But in fact, this is a significant process of learning the game - especially if you do this with many different characters. It helps in these three aspects:

There is no need to rank up each character to the max - do this as long as you enjoy the process.

When you feel ready (you do not mash buttons and know the mighty moves of your character), feel free to prove yourself in online matchmaking.

It is highly recommended to start with Player Matches - they are not as tense as the Ranked ones. People come here to train and have fun. It’s the next level of your game practice.

Then, start your journey in the Ranked Battles. Obviously, players fight here for Tekken online ranks, so the action here is quite intense.

In the online matchmaking, you start with the 1st dan rank. The developers made this starting point to have a space for decreasing your ranking. Don’t worry if this happens. Getting lower in any game rank system is a normal process and a way to gain some experience.

The online ranking system in Tekken 7 tries to find opponents of the same level - to make matches more interesting for both sides. Victories bring you points and lead to promotion to a higher rank. Losses take points away and may lead to demotion. Sometimes you may meet a stronger opponent who just lost their rank. Or you may start playing with someone weaker, who just got promoted and isn’t ready for this success. Don’t base your in-game progress on just a few matches. Sometimes you win, sometimes you lose. What happens more often? This builds up your rank!

Ranks for your character

Each character in Tekken 7 has their individual ranking, so when you start playing with a new guy or girl (or robot), you start the ranking from the 1st dan. This is quite a fair system that really allows developers to understand the skills of players. Even if you are super good at playing King, you may still need to prove yourself with Nina or Kazuya Mishima. Each new character is an amazing universe of awesome moves and attacks - try them out and you will get a significantly refreshed experience.

All ranks in Tekken 7

The feeling of progressing through ranks in a fighting game is pretty exciting. Technically, the whole system has been invented to connect players with similar skills in online matchmaking. But practically, ranks in Tekken 7 give gamers additional powerful motivation for self-improvement. So, the question we all are waiting for - how actually to get a better Tekken 7 rank?

How to climb higher in Tekken online rankings?

Ranking in Tekken 7 is based on points. You earn them when you win a match, and you lose points when your character is defeated. The system is flexible - you have more points when you get the victory against someone with a higher rank and fewer points after defeating opponents with lower ranks than yours.

Check out the progress of each character directly in the game. There is a rank bar that indicates how far this fighter is from the next promotional match and, therefore, from the next Tekken 7 rank.

Your victories are the only power that can help earn better ranks in this fighting game. And to gain that power, you definitely need:

Your attitude to the whole process is quite significant. Set high goals but go easy on yourself - leveling up in Tekken 7 takes time, and sometimes losses give better lessons than victories.

Reaching the Yellow tier is already great progress that proves your skills and dedication. The Ruler tier is the level of exceptional achievement, and players here should be proud of themselves. Starting from the Blue tier, the fights become super tough, so only the best players can win here. And only the best of the best have a chance to reach the Gold. Becoming Tekken God Prime? This is the path of incredible legends!

As you can see, this system is different from online rankings in Street Fighter V. The Bandai Namco developers created their unique list and have it tested in other games of the Tekken series. Do you like such a system? Would you like to change something?

We hope that this article has shown you the glorious path to success in Tekken 7 (and potentially in Tekken 8). And also we hope it doesn’t scare you - however competitive fighting games are, it is much better to play without stress and having only fun. Let the ranking just indicate your progress and give additional motivation to become a better version of yourself. DashFight will be here to support you with many useful Tekken 7 guides and articles. Follow us on Facebook and Twitter! Join our Discord community!