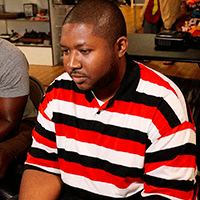 Terrence is known as Chun-Li main.

Terrence is experienced in Ultra Street Fighter IV and Street Fighter V and could've been seen at such tournaments as The Fall Classic 2017, which he notably won, DreamHack Austin 2018 (3rd place), April Annihilation 2019 (2nd place), and lots of other fighting game events where he reached top-16 positions.