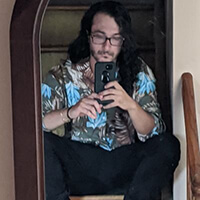 Jared "Stocktaker69" Berkowitz is a Smash Ultimate and former Wii U competitor from New York, USA. He used to main Villager in Wii U, but switched to Wolf and Palutena in Ultimate. His most notable result is 4th place at Return to Yoshi's Island in 2019, where he was defeated by Samuel "Dabuz" Buzby. Stocktaker 69 also made it to top 50 at Let's Make Big Moves and top 8 at Mind over Meta in 2020.