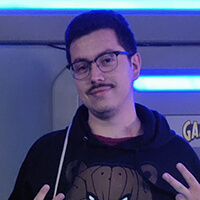 Samuel "S.A.M." Duran is a fighting games competitor from Las Vegas, USA. His first notable appearance was at EVO 2017 in Tekken 7 tournament, where he reached 129th place. S.A.M. also took part in lots of local and regional tournaments like Final Round and SoCal Regionals in 2018, where he also appeared in the Soul Calibur VI tournament. At EVO 2018 S.A.M. notably reached 65th place in Tekken 7, and at EVO 2019 appeared as a Samurai Showdown competitor besides Tekken.