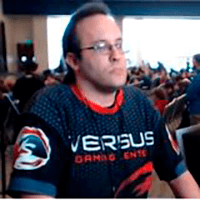 NickRiddle is quite an experienced competitor since he's taking part in various tournaments since 2007 in Super Smash Bros. Melee. As a Smash Ultimate player, he notably took part in Smash Conference United, Genesis 6, Frostbite in 2019 and 2020, MomoCon 2019, CEO 2019, Evo 2019, Glitch 7, Genesis 7, Pound Online, The Airlock, and many others.