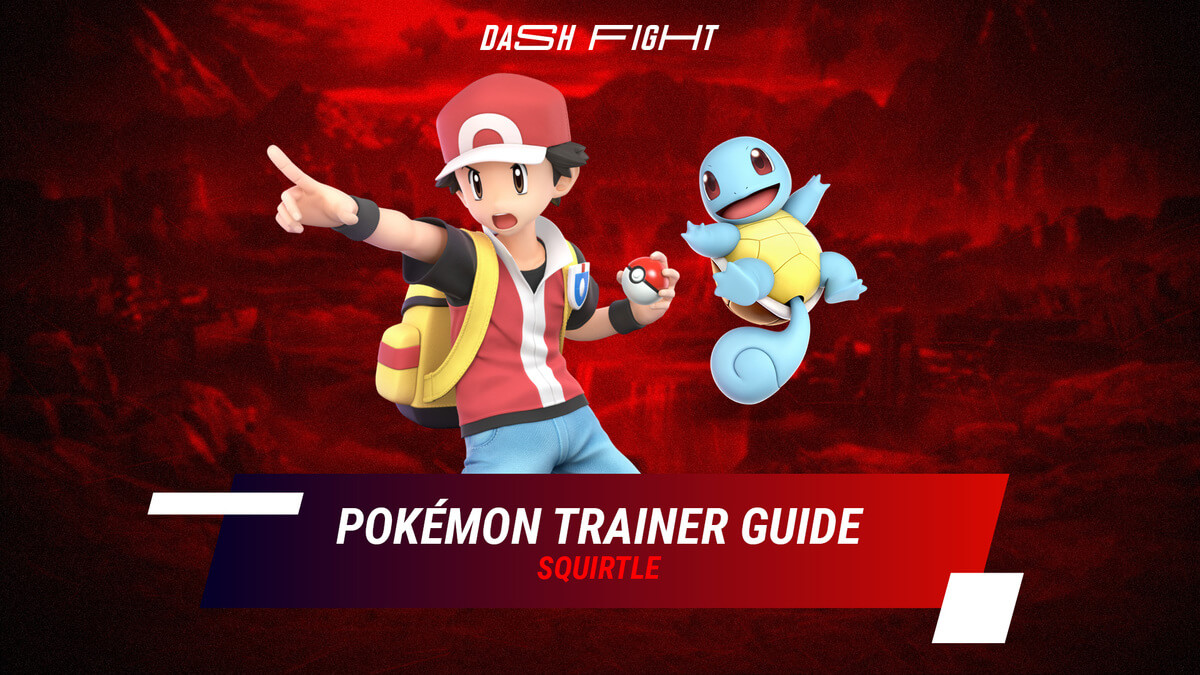 Nintendo
#Guide#Evergreen
Bring the power of water into your fight! This creature is the smallest one for Pokémon Trainer, and still, Squirtle can be of very good use in SSBU.

Pokémon are almost perfect characters for Super Smash Bros. Ultimate. These creatures like to fight in their core role-playing games and use various impressive attacks, which can be easily transferred to SSBU.

We have already posted on DashFight a moves guide on Incineroar, a Pokémon from the Sun/Moon games. And now, we are going to take a closer look at an even more iconic creature - Squirtle. This water-type cutie is part of the three-fighter army of Smash Ultimate Pokémon Trainer, alongside Ivysaur and Charizard. Each of these Pokémon have their unique moves and combos, so DashFight prepares individual guides for them.

Squirtle is one of the best-known Pokémon (maybe it is not as recognisable as Pikachu though). In the very first game of the series, Pokémon Red/Blue, players start their adventures by choosing their starter Pokémon. This can be:

Have you noticed the trick? The developers of Super Smash Bros. give Pokémon Trainer three creatures from this starting gang. Each of them is of a different evolution stage, so during a fight, you can summon a small and quick one, a medium-sized and a bit stronger, or a huge and super-powerful. Squirtle is that small, quick, and not-so-mighty guy.

Another starter Pokémon in Super Smash Bros. Ultimate is Greninja from Pokémon X/Y.

Considering the popularity of the Pokémon games, it was inevitable for Masahiro Sakurai to add Pokémon Trainer to the roster. But the idea of having a three-in-one character was too ambitious for the original game Super Smash Bros. 64 and even for the sequel - Melee. Squirtle and his friend made their first appearance in Super Smash Bros. Brawl for the Wii consoles.

Then again, we had a game without these fighters - Super Smash Bros 4 (for Wii U and 3DS). With the promise “Everyone is here”, the community got the Pokémon trio back. Super Smash Bros. Ultimate Pokémon Trainer has improved visuals and some adjustments in the moveset.

On the one hand, using this character is quite a good idea (especially if you like Pokémon). You choose a boy or a girl, who do nothing and just observe the fight (so, with other SSBU characters, you control the fighter, but here you control a trainer who controls the fighter - a bit confusing, isn’t it?). Then you have three playable creatures with different characteristics for different situations. And here comes the other hand - the situations during your fights change with the lightning speed, so you should know attacks and features of all three Pokémon perfectly well and feel who and when to choose.

So, is Pokémon Trainer good in Smash Ultimate? The answer strongly depends on your skills and dedication. First, take your time to practice with each Pokémon. And only then start actively changing them during a fight.

The smallest creature in the trio is really fast, but his attacks are not very effective. Even with a high percentage on the opponent, his Smash attacks may not lead to the victory. Also, the recovery options for Squirtle are not the best, so it would be better to not jump far away from the platforms.

You can use Squirtle against other fast fighters (such as Sonic) to keep up with the game pace and deal initial damage. Or you can choose the water guy for fights against heavy characters (such as Bowser) and play the speed as your advantage.

Attacks of Squirtle has small numbers of frames for the starter stages. One of the best features of this character is the possibility to change direction of jumps - even after landing his attacks.

We continue this Pokémon trainer guide with the article about other two creatures:

Practice a lot, and you will learn lots of tricks in playing these characters and performing awesome Pokémon Trainer combos. DashFight is here to help you to master the game! Check out our Super Smash Bros. Ultimate Guide for beginners!

Join our communities on Facebook, Twitter, and Discord to get interesting SSBU articles and news directly into your social feed.