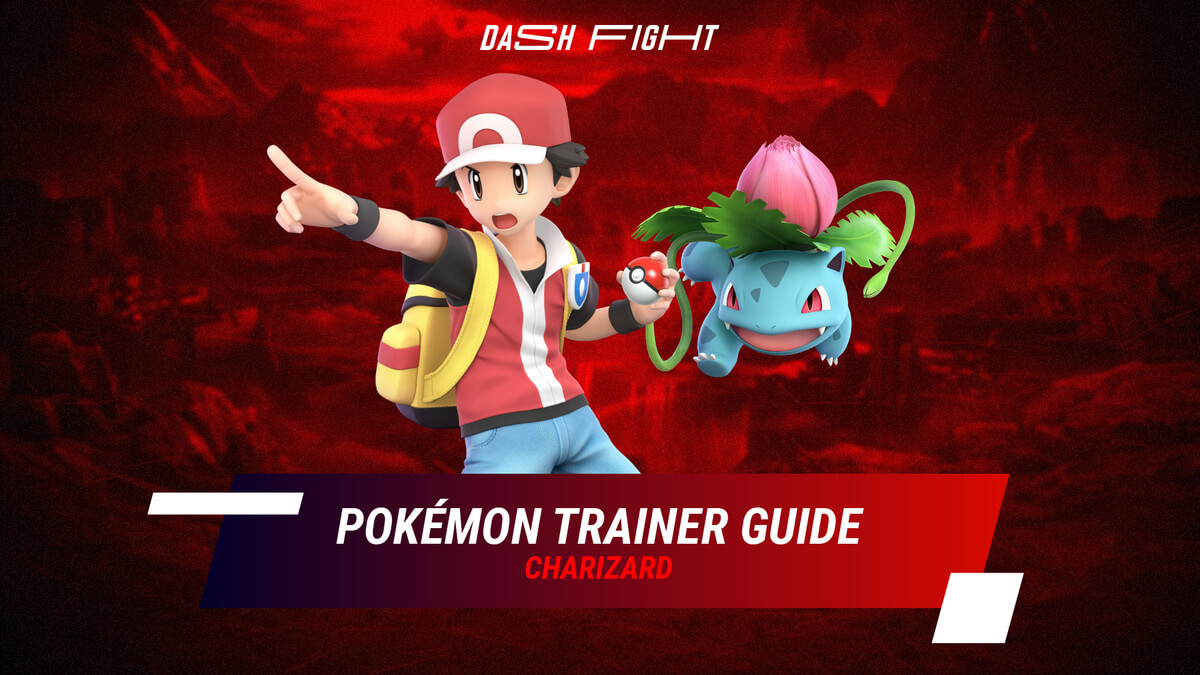 Ivysaur is not an individual fighter in Super Smash Bros. Ultimate. He is part of the three-creature team of Pokémon Trainer - and quite a decent part indeed. His power is not as big as of Charizard and he is a bit slower than Squirtle. Often, players summon this Pokémon after dealing enough damage with the weakest but very quick turtle but before trying to finish the opponent with the super-strong but rather slow dragon.

Would you like to master Smash Ultimate Pokémon Trainer? Then you should learn how to play Ivysaur! And this SSBU guide on DashFight explains the basics.

To unleash your full power in the Nintendo fighting, take a look at our article How to play Super Smash Bros. Ultimate!

Pokémon Trainer SSBU is a unique character. In all the other cases, you choose a fighter and then control them in a match. This is true for all the other Pokémon in Super Smash Bros. Ultimate: Incineroar, Pikachu, Pichu, Greninja, Mewtwo, and Jigglypuff. But when you choose Pokémon Trainer, you can summon these three creatures:

So, these three Pokémon are of different types and evolution stages. You can switch between them freely during a match (Down Smash), and this possibility opens many interesting game strategies.

On the other hand, to play Super Smash Bros Ultimate Pokémon Trainer effectively, you should learn all three creatures. Practice makes perfect! Train with each Pokémon, take them to many fights, and soon you’ll notice how your skills improve and you earn better Global Smash Power.

DashFight already has a guide on Squirtle - check out the general description of this fighter and discover his moveset.

In his original role-playing games, Ivysaur is a grass/poison type Pokémon. This means that he takes his power from plants and can poison opponents with vegetable matter. Ivysaur has a flower on his back. He uses it for attacking and spreading poison. The next stage of his evolution, Venusaur, has this flower fully opened.

Animations of Ivysaur in Super Smash Bros. Ultimate strongly resemble the original moveset of this creature. Thanks to that plant, Ivysaur has a good attack range. His power is not devastating but it definitely can significantly increase the percentage number of your opponent. Ivysaur has a few multi-hitting attacks, and they are quite effective.

Recovery options of Ivysaur are tricky, and you should pay special attention to training them - mostly because the creature must face the platform to grab the ledge with his vines (Up B).

Many players consider Ivysaur strong against such fighters as Little Mac, King Dedede, and Bowser. In the group of unfavorable matches for this Pokémon, you’ll meet Palutane, Mega Man, and Young Link.

To master Pokémon Trainer combos, you should learn each attack separately and then try to link them. Experiment with your favorite fighter and you’ll discover new amazing battle tricks - and thus, you’ll find your own answer to the question “Is Pokémon Trainer good in Smash Ultimate?”

Pokémon Trainer with Squirtle, Ivysaur, and Charizard are available in two games of the series - Super Smash Bros. Brawl and (of course) SSBU. More info on the whole franchise can be found in our article Ultimate Story of the Super Smash Bros. Series.