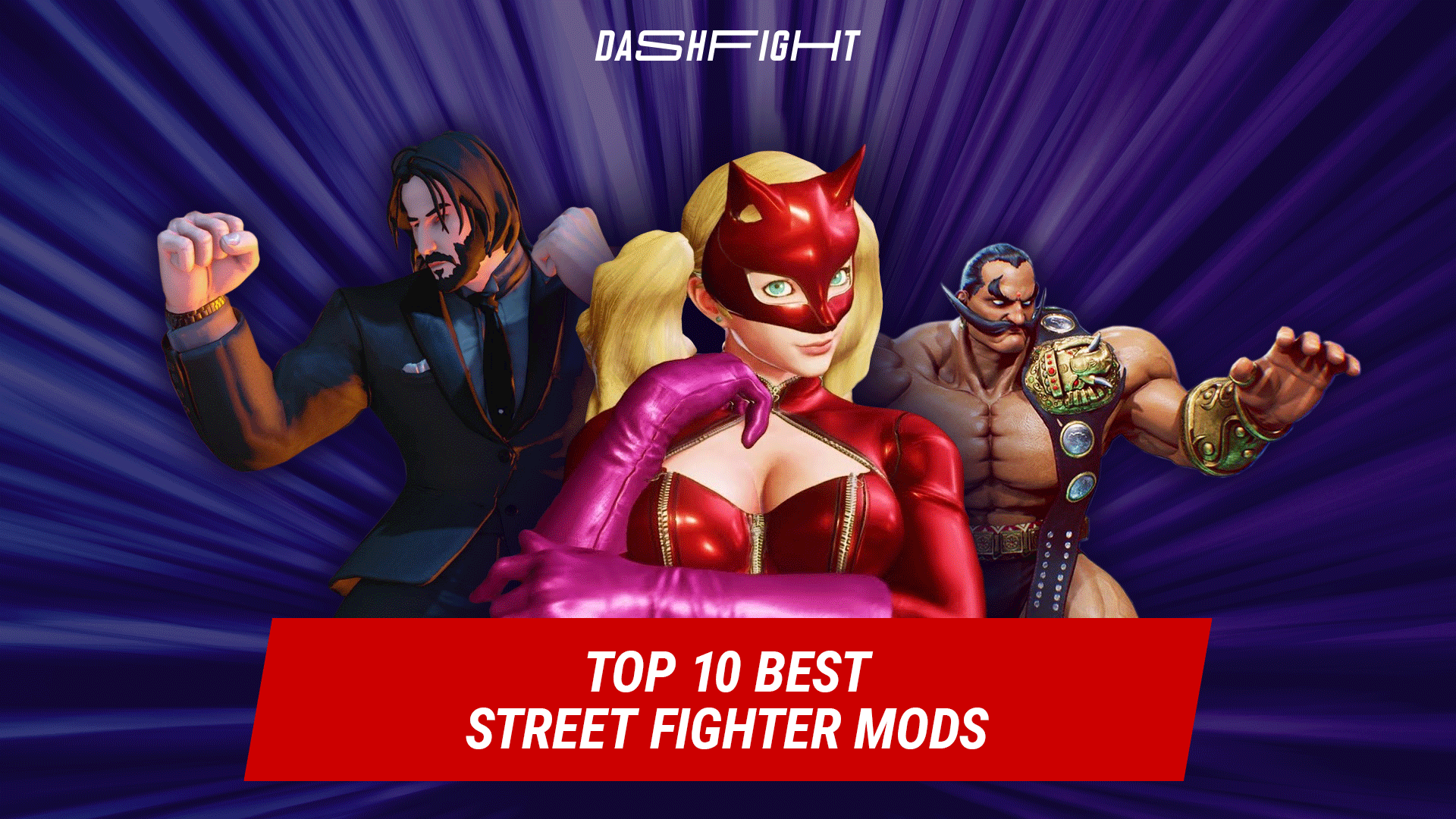 I know, that's a weird question to ask from the get-go, but think of it, when we think of art, we generally consider original creations that the artist makes from scratch and presents a beautiful body of work. But, how about the artist that takes something that exists and creates something incredible from it? In this instance, I'm talking about modders. They are the unsung heroes of the gaming community. They make games a whole lot more fun and exciting by the sheer number of things they can do. If you play Pro Evolution Soccer, you will probably know of modders as they are generally the ones responsible for making up for the lack of licenses that PES generally suffers from.

But this is a fighting game website, and the modders we are talking about are the ones who make our fighting games more exciting with the addition of modified characters which bring a new spin to the gameplay.

There is a tonne of Street Fighter V mods out there ranging from the truly sublime to the barely basic. In this article, we'll put down a list of our 10 favorite mods of all time for SFV. Naturally, as with any list done, this is a subjective selection of the mods that were the most eye-catching to us, and which you might find to be just as incredible as we do.

This one is for the Sega fans. Cult classic hero of the Shenmue franchise, Ryo Hazuki, joins my list as a Ryu Street Fighter 5 mod.

Granted, I'm a big fan of the games, but Ryo's also made it on the list because of how authentic Khaledantar666's mod is. That includes his jacket, which happens to have physics of its own. The mod even features 15 color variations.

The SFV mod isn't currently free to download, so you can either choose to support Khaledantar666 or wait till it's made available to all. See for yourself just how cool the mod looks here.

When the Decapre mod was first released for Cammy in 2018, it was an exceptional piece of work. However, game modder tom12422 has now made it even better with the addition of a voice line, Cammy's Critical Art, four costumes, ten colors, a V-Skill, V-Reversal, and her theme - the guy definitely knows how to mod Street Fighter 5

The extra costumes are from story mode with and without her mask,  BrutalAce's Bikini Remix outfit, and Moddah's Nostalgia. Small fixes were also implemented to make this one of the coolest Decapre Street Fighter 5 PC mods out there. However, tom12422 warned against its use online as it will cause the game to crash if your opponent doesn't have the mod installed as well.

You'd expect that she replaces Cammy, but it's Fang's slot Decapre takes up instead. You can download the updated mod here.

This mod is a new one by SleepingMaster that initiates a crossover that should've happened at least a decade ago. We see Mortal Kombat 3's rendition of Jade join the roster as a replacement for Falke.

The transformation makes a lot of sense, considering both characters use a staff (bo), but that's probably where their similarities end. SleepingMaster prefers the '90s outfit to the Mortal Kombat 11 version, and though I can't say I agree, it is very well made and looks like it belongs in Street Fighter V.

For all you Mortal Kombat and Jade fans, you can download SleepingMaster's classic mod right here.

This SFV mysterious mod is a bit of a scary one, not just because of the idea of a female Birdie in existence but also the fierce half-crazed look of her face. What's most disturbing is the way her long tongue hangs, but once in a match, players get to see her in full weird glory.

Resembling a character out of Mad Max, Birdie still has her chain and carefree mannerisms. Yet, you'll find yourself marveling at how much Birdie has changed—created by Famika, and the second iteration of an older attempt at changing the thug's gender (it would be super weird to see this form in SFV futa mod). While the original gender-bend had a handful of issues, including inconsistent skin tone, the upgrade seems very well made.

If you want to add female Birdie to your SFV pack mod manager, follow the link here to Famika's page.

This mod was a pleasant surprise. There are some creations you expect and others you don't, and this was certainly among unexpected Street Fighter mods for me. I never would've expected the mod to be for G either, yet he fits like a glove, especially how Ouji-Chama was able to include voice lines. Words from the legend himself replaced G's "Message to the People" speech as he fills his EX meter.

The Michael Jackson mod is from his role in the 1988 movie Moonwalker, complete with a white suit and fedora. G's Critical Art, Pangaea Burst, also gets a line from Moonwalker's iconic song, "Smooth Criminal," putting a beautiful end to his opponent's ambitions, political or otherwise.

Ouji-Chama's mod is from February 2019 and still holds up against more recent creations. You can grab the mod here.

Keanu Reeves arguably revitalized the action genre with his turn as former assassin, John Wick in the film franchise. Now the movie has a couple of sequels and his haggard look in the series has become something of a staple. So, imagine the pleasant surprise that he now dons that look in Street Fighter V thanks to this amazing mod by Ouji-chama. Understandably, it has been around for a while and this might mean some people have seen it and are over it, but it is so well done that it cannot be overlooked. The choice of Cody as the modded character was also perfect as it seems to be a lot more suited to something that Keanu would do.

Ouji-chama is no stranger to this list as his phenomenal work with Michael Jackson has already been highlighted and he brought all that genius to bear in this work which is amongst the best I have seen in a while. You can of course check out the mod here

This was something of a no-brainer. Darun Mister was a character that appeared in the Street Fighter EX series and was an Indian wrestler and personal bodyguard of Pullam. Darun hasn't appeared in any of the mainline Street Fighter games, but he, along with other popular characters from EX (Garuda, C. Jack, D. Dark, and so on) are all fondly remembered. In this mod by THEJAMK, Darun is brought back to life in the shape of Zangief. Considering that they are quite similar in build and are both wrestlers, there was no other character that could have been modded in the entire SFV roster that would have made more sense.

This Darun comes with a championship belt slung over his shoulder and while this is far from realistic (there's no way that belt isn't coming off in a fight) it still seemed oddly fitting. You can download his mod here

Boa Hancock is a popular character from the One Piece series (AKA the anime your grandpa probably started watching as a kid and still isn't done). This mod, made by Tiggie White in the image of Juri is excellent as it just fits. Juri's stance which has always been unique doesn't look out of place with Boa— I mean, she tilts her head all the way back to 'look down' on people— and the design is so well done.

What is so remarkable with Tiggie's design is how natural it feels within the Street Fighter Universe. Boa Hancock is not the first anime character modded into a fighting game as there are mods for Luffy, Majin Buu, Dio Brando, and so many others. But with Boa, it feels completely natural and someone who doesn't watch One Piece and is new to SFV might mistake her for a regular member of the cast.

What's more, she comes in six colors giving you even more options to choose from and you can decide if you'd like your Boa Hancock with or without a cape. This mod is not free, but you can check it out here.

Khaledantar666 returns to the list with this exquisite mod of Persona 5's Ann Tamaki playing the role of Karin. She is not the only Persona 5 character modded into Street Fighter V as there is a Sakura Futaba as Menat mod out there. Ann makes this list due to the authenticity of the character and her likeness to Karin. Watching Ann in her dungeon outfit fight against enemies feels so natural. The only gripe you might have is that since Karin doesn't use a whip, having her as Ann might not have been the best fit especially when you have a character in Poison who does use a whip.

That said, it is clear that the Ann Tamaki mod is excellent and should be a lot of fun to use. You can check out the mod here for download.

If you watched the Bleach anime, you would probably conclude that Tier Harribel, number 3 Espada in the series and a major antagonist has one of the more interesting designs in the show. She was an impressive water user that really gave the Squad 10 captain a real go in their battle. In this amazing mod by Brutal Ace, we see Harribel come to life in SFV as Kolin. The mod is gorgeous in its execution and has all the bells and whistles you'd want from a Harribel mod. Harribel being a Water-user makes her an excellent Kolin who is also Ice-inclined (close enough). Of course, Kolin doesn't use a sword while Harribel does which could cause the nitpickers to have a problem or two, but just have a look at the design and ask yourself if you wouldn't love to fight in that costume. You can check out the mod here.

I was tempted to add Fatal Cutie Terry, the excellent Lucia mod by BrutalAce, and Tifa Lockhart modded as Cammy but decided to pick a fresh set of mods. It does deserve an honorable mention, though, so check it out in the link above.

I hope you liked my roundup of Street Fighter V mods and possibly found something you love as much as I do. Stay safe and stay tuned to DashFight for other modes and articles on how to install SFV mods.

Meanwhile, you can explore our Street Fighter 5 Guide for Beginners.