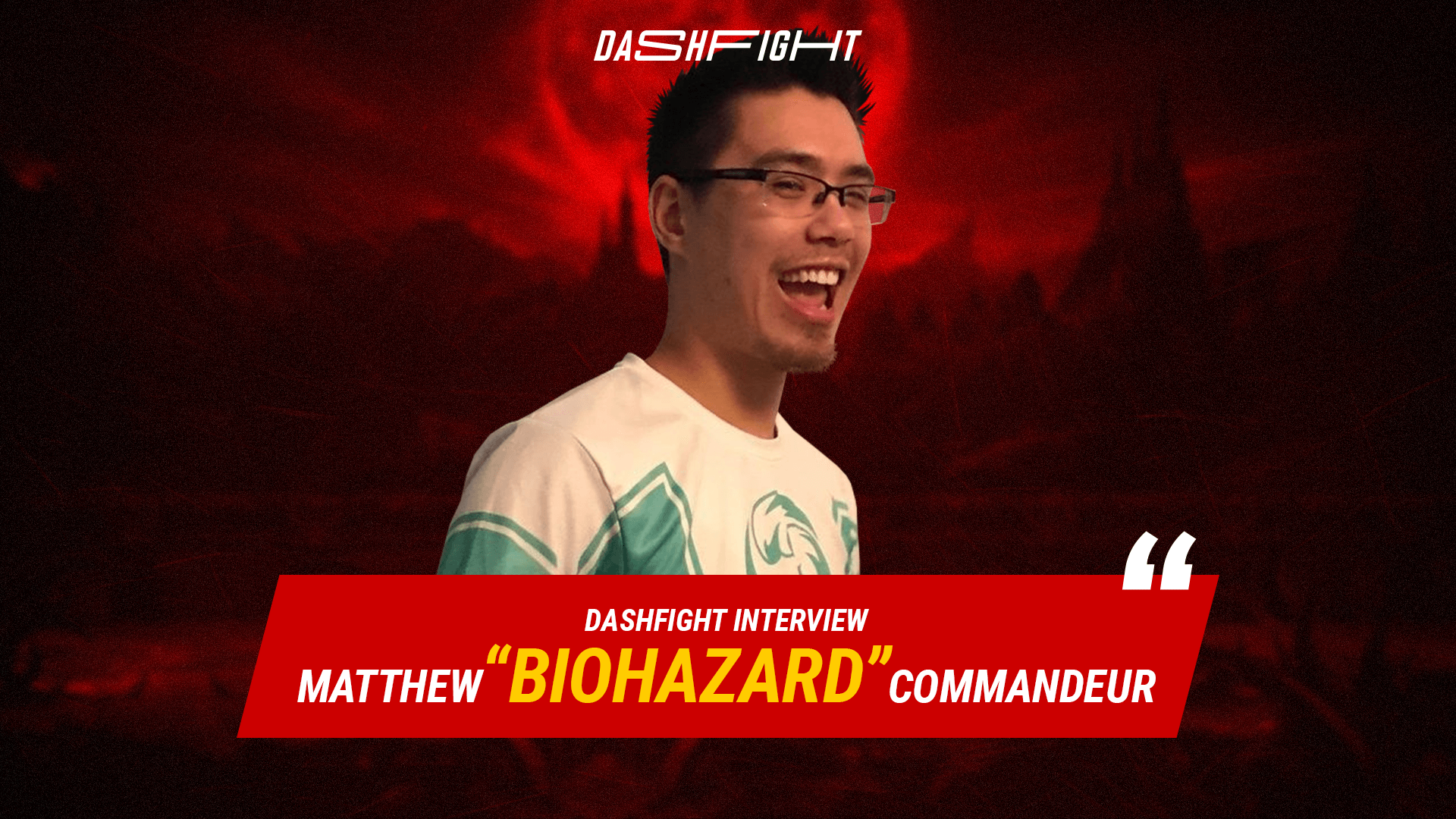 #Interview#WUFL
The player talks about his fighting esports experience, gives advice for beginners, and expresses his mood before an upcoming big MK11 match

WePlay Ultimate Fighting League has prepared quite a few super exciting events. Three tournaments of WUFL Season 1 are going to be insane! And in addition to that, the first Ultimate Weekend Brawl is right around the corner. On March 6, some of the most prominent MK11 pro players will fight against one another for glory and sweet prize money.

One of these guys is Matthew “Biohazard” Commandeur from Canada. At Ultimate Weekend Brawl, he plays against Tweedy.

The fight itself will be the best proof of skills and in-game style, but what about the person behind the virtual character? I (EugeneZH) had a great opportunity to chat with Biohazard and ask him questions - about the start of his esports career, his experience at different tournaments and with different games, and of course, about his expectations from that match versus Tweedy.

How did you start playing fighting games?

I started competing in the first Injustice. Before that, I played fighting games casually, like Street Fighter IV and Marvel vs Capcom 3. Then, I got Injustice 1 and started competing in it - because of my brother, HoneyBee. He was very competitive and wanted to go to the local scene to prove that he was good, so we ended up both going. And that’s how we started - getting into Injustice 1, finding a local Toronto scene, and then participating in big US tournaments.

Was it easy to make that step to becoming a pro?

It was pretty easy. It wasn’t like we were trying to force anything. We just wanted to get better at the game and show how good we are. It was just a gradual process of going out into your local, going out into bigger tournaments, and so on.

Things are a bit different now. What would you recommend to those who want to play fighting games professionally?

Because of the time we are living in right now, a lot of stuff is online, and there are many opportunities online to prove how good you are, prove your mettle. Sign up for any event to do with your game, just prove that you are good and keep on the grind. This is how it is going to be - at least for now.

And what are your recommendations for someone who doesn’t plan to become a champion and just want to play better?

If you are a newbie and you are new to fighting games in general, if you want to play it and you want to become even a little bit better, there are a lot of avenues to do that. For example, check out helpful content on YouTube.

There are many opportunities online to prove how good you are, prove your mettle. Sign up for any event to do with your game, just prove that you are good and keep on the grind.

2020 was rather a break for big tournaments. Are you excited to return to action?

Definitely! It’s been an entire year of just online competition. I feel like the scene in general is just waiting to get back. Offline is not only where the game shines the best and where it is supposed to be played, but the experience of going to events and meeting everybody is the greatest part of playing offline.

You’ve been in fighting esports for a long time. How not to turn playing at tournaments into a job routine and find joy in competing?

I’ve been doing this for a while, 8 years is a pretty long period. But even with every fighting game that I’ve played, Injustice 1, MKX, Injustice 2, and MK11, there is always something to learn and something to enjoy about the fighting games. And even if it’s a time when developers are not really supporting the game, there is still something in it that you can find enjoyable. When it comes to competing and fighting in any tournament, there’s always the fire that you get from the will to compete and will to win. It doesn’t really change for me. Even though it’s been many years, I always get that hunger.

What do you consider the biggest achievement of your esports career?

I have a couple. Definitely one of my biggest achievements in fighting games is getting an EVO medal. At my first EVO, I got 9th. I even think there were two EVOs that I went to, for Injustice and Mortal Kombat, where I got 9th. So, the third time, I was in the same situation with Injustice 2 and this time I finally achieved that EVO medal. It just felt good, you know? I was really looking for that Top 8 win. Besides that, either winning VSFighting 2017 in England and viennality 2k18 in Vienna, Austria are the other two my biggest highlights.

Is it fun when your brother is a pro player too? Or that is an additional challenge and competition?

Early on, when I used to live with my brother, it was great to have a training partner who was always there, so you can always get high-level competitive sets, and with that person, you can really grind out the game. It definitely helped us both early, early on in our career. I would say, now it’s still helpful to have a brother who at least plays certain characters at a high level, so I can always get the practice against those characters. But it’s in a different space now because we don’t live together anymore.

What if you face your brother at the Grand Final of a huge tourney? Will you feel more confident, or will that be an additional burden?

Who’s your most challenging yet most interesting opponent?

It’s hard for me to say about online fights, I was in Season 1 last year, and things have changed. At online tournaments, I’ve been fighting quite a bit TheMightyUnjust and Tweedy. We’ve played a lot in the ESL tournaments as well as other online events.

What do you expect from the upcoming fight against Tweedy?

I’m definitely excited about our money match that is going to happen. I think it’s going to be a great set, we always have some pretty good sets whenever we play. It can be very back-and-forth. I’ve beaten him at some tournaments, and he’s beaten me at some tournaments. I’m hoping I can do well, and I’d love to win. It will be an interesting set, so let’s see who’s better.

Online
$1,100.00
OverviewWatch VODs
Ultimate Weekend Brawl
completed
I think it’s going to be a great set, we always have some pretty good sets whenever we play. It can be very back-and-forth. I’ve beaten [Tweedy] at some tournaments, and he’s beaten me at some tournaments. I’m hoping I can do well, and I’d love to win.

What do you think about the upcoming WUFL Season 1? Should the community keep an eye on this event?

I heard about WePlay Esports putting together Season 1 for the Ultimate Fighting League. They have Mortal Kombat, Soulcalibur, and Tekken. I think this is just a great opportunity, especially during this time, where there’s not a whole bunch of big online events to look forward to, but there is this big offline tournament, so a lot of eyes are gonna be on it. It will be really good for the community. I’m excited not only for Mortal Kombat but also for the chances that Soulcalibur and Tekken will also get from WePlay.

Is MK11 better than MKX, or would you prefer to return that game to the top tournaments?

And why is Injustice better?

I think [WUFL Season 1] is just a great opportunity, especially during this time, where there’s not a whole bunch of big online events to look forward to, but there is this big offline tournament, so a lot of eyes are gonna be on it.

What do you think about new DLC characters in MK11? Do you like them? Would you play them?

I like a lot of them. I play Nightwolf, which I enjoy a lot. Also, I play a lot of Rambo. Some people think he is not that good, but I see he has some style in his fights. I’m one of those people who are just gonna explore and try to figure things out, especially if it’s a grappling character.

And from the whole roster, who would you recommend to a beginner?

One of the easiest characters to learn is Baraka, especially if you are playing him with the standard variation. He has a very easy, beginner style. It’s a good way to learn the game. Obviously, he’s gonna have some challenges with zoning - it’s just such a character. But other than that, he is a very easy beginner character. I think.

Do you play fighting games just for fun, not to improve skills?

When I play the game, usually it’s for getting practice that I need to compete at a high level. I do enjoy playing the game for fun, but a lot of the time I spend playing it is for streaming or for tournaments.

One of the easiest characters to learn is Baraka, especially if you are playing him with the standard variation. He has a very easy, beginner style. It’s a good way to learn the game. Obviously, he’s gonna have some challenges with zoning - it’s just such a character.

Do you enjoy fighting titles not from NetherRealm Studios?

Do you enjoy non-fighting gaming?

I do enjoy gaming in general. My gamertag is Biohazard, which I got from enjoying Resident Evil. I love horror games, the Uncharted series, Last of Us, the Batman: Arkham games.

Where can people find you online?

Thanks for this conversation, Biohazard. We at DashFight hope to witness your victories at many tournaments.

And what about a couple of video interviews? We had a chance to talk with A F0xy Grampa and Tekken Master, finalists of WePlay Dragon Temple.

Stay tuned to DashFight on Facebook, Twitter, and Discord to always be in the whirl of the most exciting things from the world of fighting games.