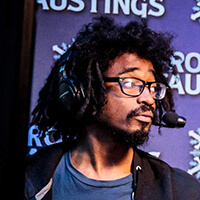 Eli "ElitheCurry" Curry is an American fighting games player and competitor. In Street Fighter V he mains Laura and attended lots of local and international events since the beginning of his career in 2016, like Kumite in Tennessee, Frosty Faustings, Evolution Championship Series in 2018 and 2019, Combo Breaker in 2017 and 2019, and DreamHack Anaheim 2020. ElitheCurry is also performing in other disciplines like Dragon Ball FighterZ, Marvel vs Capcom titles, Samurai Shodown, Injustice 2, and MK11.

He's also got an active Twitch channel, where he and his girlfriend, who's also a fighting games player, streaming different stuff.