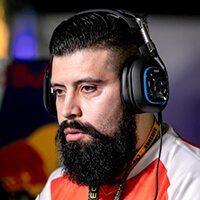 Commander Jesse has been playing and appearing at different events since Street Fighter IV, constantly reaching top 10 places at different tournaments, such as Canada Cup 2017, SoCal Regionals 2017, East Coast Throwdown 2019, and others. At Capcom Cup 2019 LCQ he almost has done it but lost twice to Naoki "moke" Nakayama. Still, Commander Jesse got his big win as he has won DreamHack Anaheim 2020 SFV tournament.