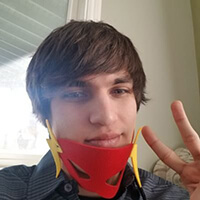 Eric "Flaquito" Malagon is a North American fighting games player and competitor. His first major tournament to attend was EVO 2017, where he displayed in Street Fighter V and Guilty Gear Xrd Rev 2 tournaments.  Then he made an entrance on the same tourneys on EVO the year after in 2018, then at EVO 2019 he participated as Street Fighter V, UNICLR, and Samurai Shodown player. At DreamHack Anaheim 2020 he became 3rd in Street Fighter V tournament, where he lost to HamBam in the Losers Final.