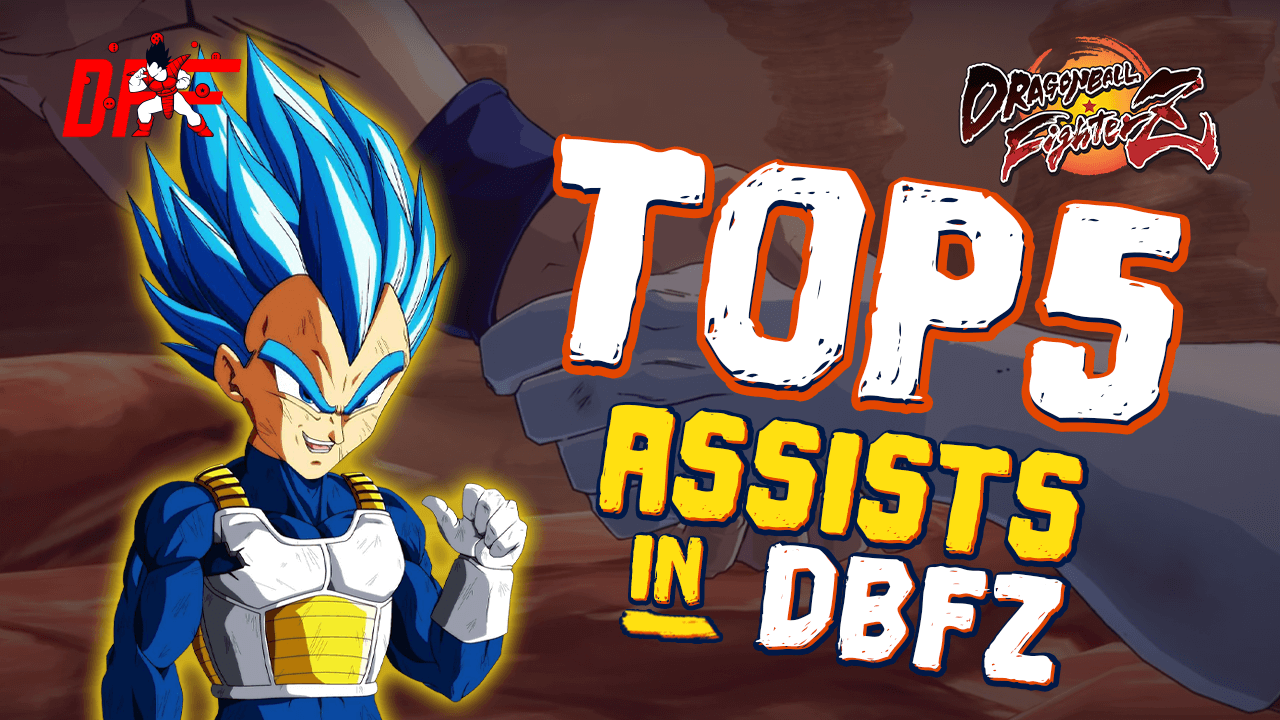 #Video#Evergreen
Which assist attacks can be the most beneficial for your team in Dragon Ball FighterZ?

It seems like we gamers love to rank stuff — even when it’s practically pointless. For example, DashFight’s channel has a video with Top 5 DBFZ Supers, which are basically the most spectacular attacks in the game, not the most effective in fights. But they are so cool, we just couldn’t help but rank them.

Does anyone choose characters for their Dragon Ball FighterZ team because of the assists only? Yep, you probably can do that as the team composition is a way to express yourself and adjust the game to your personal style — it’s all in your power!

Z Assists are tightly connected to the team compositions in DBFZ. It is true to the point that Assists prove to be good or not so good mostly in specific teams.

Oh… sometimes I wish there were some universally the best assist. At a desperate moment, when the whole world can’t believe in my victory, I call it, destroy the opponent and win the biggest esports title possible. I wonder, could they add it to the game for only me to use…

It’s really pretty difficult to talk about assists with no connections to the characters in your team and even specific situations for using them.

For example, Master Roshi has a very good A Assist. It’s a good quick beam that could have many uses in fights. But Master Roshi is a very technical character, different from all the others in the roster. Not so many players like the Turtle Hermit (and can play him), and you might consider choosing someone else with the same good beam.

Some Assists are suitable for specific partners to extend their unique combos or cover their actions.

Also, you can’t take into account one aspect of an assist only. Piccolo’s A Assist, Homing Energy Blast, shoots two big energy spheres, pretty destructive and theoretically effective. But they, and especially the second one, are rather slow and require mastery from the player side to get advantage from using them.

Guys, consider these and other factors while making decisions about your team and their assists. And don’t forget about your personal preferences — it’s a decisive factor.

With his A Assist, Krillin throws two rocks at the opponent or gives the healing Senzu Bean to the point character. Both options are great!

The rock has only 18 (!) frames of startup, it’s one of the fastest Assists in the game (compared only to Adult Gohan’s Jet Uppercut). The rocks have very good hitstun and cover a good distance. When they hit, that opens multiple options for your team.

The Senzu Bean variant has a tricky input and 34 frames of startup. But the very idea of healing your DBFZ character is unique and tempting. The opponent might catch the Bean instead, so there is a risk.

4 — Trunks' A Assist, Change the Future

This assist creates an explosion-like projectile with a big hitbox. It looks awesome and has a very interesting use. It masks actions of the point character, such as Super Dash. It might be confusing for the opponent to read your intentions, so you could find an opening for your combo.

Trunks moves a bit forward before actually shooting the projectile. You need to understand this gap to activate the assist effectively — the opponent should be at least at a small distance from your point character. Also, Change the Future has a low blockstun.

In general, it’s an all-round assist, good for many different team compositions.

Gotenks creates an energy lasso and catches the opponent into it. Galactic Donuts holds the victim for long enough to expand your combos, and this is the primary and a super great use of the assist.

46 frames of blockstun is a wonderful thing to have, don’t you think? Yeah, Galactic Donuts gives them! What would you do with that?

The variety of options after landing this assist is what makes it one of our top choices. For sure, the donut tracking is not perfect, especially in the neutral game — the opponent has a chance to dodge out of it. Still, with some practice, Galactic Donuts will make your combos long and powerful. Everyone loves that in Dragon Ball FighterZ!

Kid Goku appears in the air and creates a massive energy sphere in front of himself (It looks a lot like Genki-dama, which accumulates energy from the whole life on the planet or even in the Universe… but ok, that is a different story).

It’s a very fast assist, with only 21 frames of startup. The hitstun and blockstun are also super impressive.

Thanks to the large hitbox, Dragon Flash Fist can be used as a defensive assist — when you call for it at a close distance from the opponent. The energy sphere shields the point character.

After Goku GT’s B Assist, you can go for mix-up options. It is also great as a combo filler.

The range of this attack is not big, so you should feel a proper position for it.

Vegito jumps and shoots a few projectiles at once, hitting a big area. It’s hard to hide from that rain of destructive energy.

You can not find a better assist in Dragon Ball FighterZ when you need good screen coverage and big hitstun. You actually can convert it into almost anything and start your best combos.

Blockstun is rather a weak point here, but it’s not utterly awful. Yeah, the benefits are much higher. Just try to use Split Finger Shot on a cornered opponent.

What is your favorite assist in the game? Do you agree with our Top 5? Please let us know in the comments on DashFight’s YouTube Channel! Don’t forget to subscribe for more great fighting games videos!