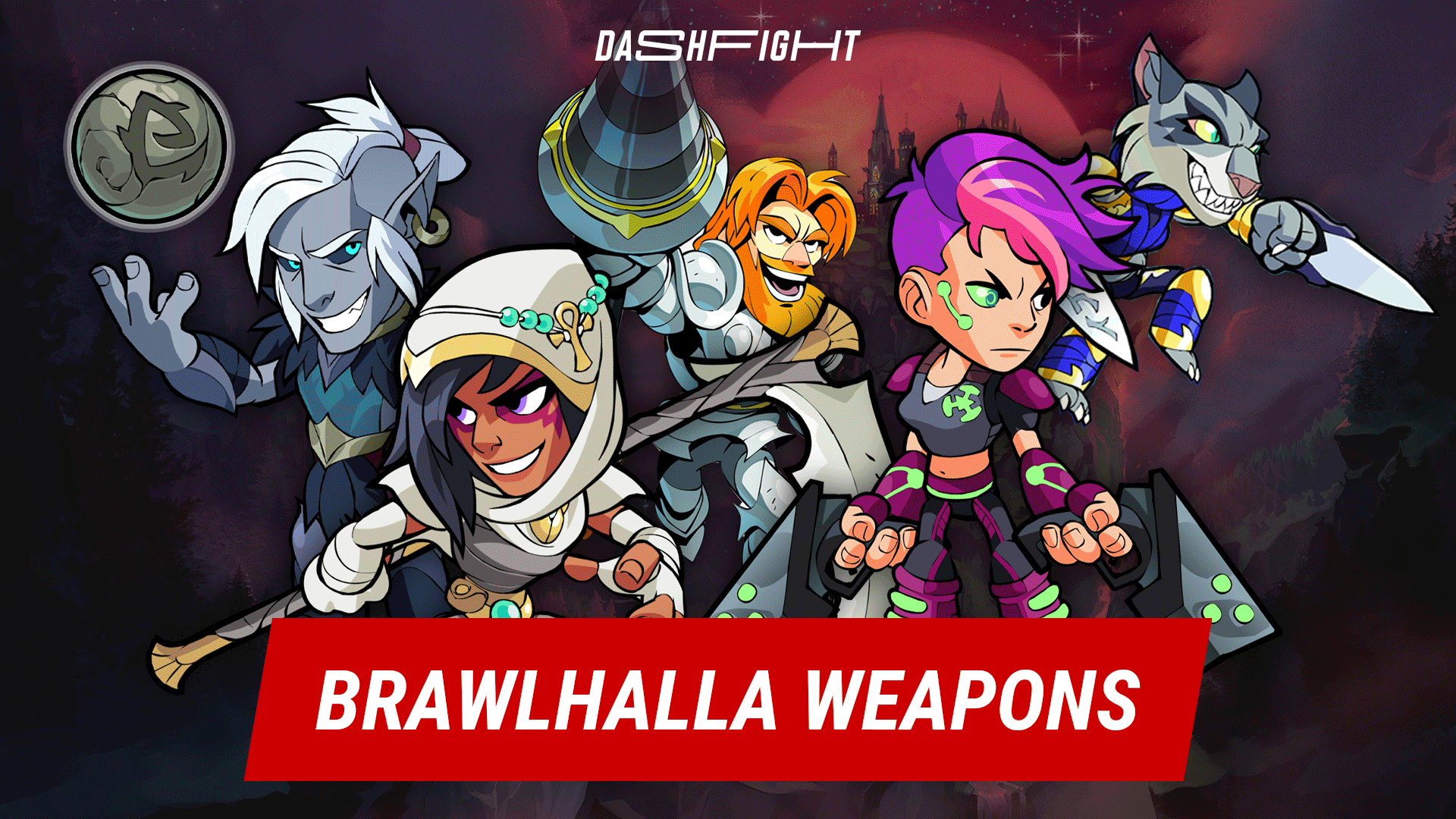 #Guide#Evergreen
Is your Sword ready? Have you filled the Orb with magic power? Are you skilled enough to win matches with the Scythe?

Brawlhalla is a pretty unique game. The first competitor that comes to mind for a clear comparison is Super Smash Bros. It’s also a platformer fighter with many characters. But when you actually start playing Brawlhalla, that analogy quickly becomes unsustainable. The game feels totally different! And the basis for that is weapon-based mechanics.

In a way, Brawlhalla is somewhere in between Smash and SoulCalibur. Can we call it a SoulCalibur on Smash platforms?

Anyways, the point is — to learn how to play Brawlhalla, you need to forget Smash patterns and be ready for something fresh and interesting.

Brawlhalla has 54(+) Legends (yep, you need to unlock these characters). Each Legend uses two weapons. The total number of weapon types is 13(+).

To get better at Brawlhalla, you should shift your focus from characters to their weapons. Let’s talk about that in more detail! This Brawlhalla guide explains the weapon system in the game and describes some general features of each weapon type.

To play Brawlhalla as a pro, you should know movesets for each weapon.

For example, all Legends (characters) with Axe have the same moves:

That means you can take any Axe character, and all Brawlhalla Combos you know for this weapon will work perfectly well. The same is true for each and every weapon type.

Only Heavy/Signature attacks differ from Legend to Legend. So, Jhala will have different Neutral, Side, and Heavy Sigs than Ulgrim or Brynn.

Instead of learning characters (as players do in Smash Ultimate and most other fighting games), you should learn to play with different Brawlhalla weapons.

So, why does the game have so many Legends?

Each character in Brawlhalla has two weapons — of different types. These combinations allow different playstyle options with different characters.

For example, you like fighting with the Sword, so you can choose these Legends:

This is quite a selection of options, don’t you think?

In addition to the possibility of having both weapons you enjoy fighting with, you can take a Legend or a skin you like as a virtual personality, especially since there's a legit opportunity to gain free Brawlhalla skins.

To quickly see which Legend uses this or that weapon, use the Brawlhalla weapon chart. It easily gives the general understanding of the game arsenal. That might be helpful for practicing a specific weapon type but with a different character. Or you could use it to look for the best secondary weapon to complement your favorite one.

All Weapons in Brawlhalla

The best way to choose a weapon for yourself is to play Legends just for fun. It’s a great period indeed when you take random characters and just mess with the game. At some point, you’ll start to clearly feel the difference between Rocket Lance and Bow. Something you like more and something you get better results with — that’s the thing you need for your Brawlhalla arsenal.

Here is a quick introduction to Brawlhalla all weapons.

This is a big and heavy thing. In Light attacks, the characters even use their fists and feet to not swing Hammer and therefore be quicker. Attack speed is definitely not an advantage here. But the raw power is. Brawlhalla Hammer gives your Legend great launching power, able to KO even with relatively low damage — of course, if you manage to land those attacks.

This is arguably the most versatile weapon in the whole game. The Sword is quick and dangerous. It’s perfect for quick attacks and long pressure periods. It also has some strong hits to launch opponents with big damage. Still, you can’t expect the same breathtaking might from Sword Legends as from the characters with Hammer or Rocket Lance.

However appealing the idea of using pistols in Brawlhalla might be, the developers made sure no weapon type is overpowered in the game. Blasters shoot projectiles and give advantages to the ranged fighting style. At the same time, those bullets are not that effective, and you have to be very good at movements. Blasters are tricky to use in a fight, but the more you invest your energy in training, the better you understand the power of this weapon. With some dedication, you will get what you expected from Blasters. It’s a weapon for quick fights and multiple combo opportunities.

This is a super heavy and super strong weapon. Rocket Lance is huge and slow, so landing an attack might be a problem here. Characters with this weapon might have problems with quick opponents. And if you play against them, you should look for appropriate moments to initiate attacks — your Legend remains vulnerable for quite a while. Rocket Lance covers a big distance in its Side Attacks, so try to strike from a safe distance.

Spear is stronger than Sword but offers almost the same level of versatility. This weapon is slower, though. You should be more careful in choosing proper moments for activating attacks. Spear in Brawlhalla feels quite straightforward and easy to use. You will have a tool to keep the opponents at a distance. The aerial game with Spear is not that good.

Katars look very impressive in Brawlhalla. Your character takes blades in both hands and creates a threatening atmosphere. The weapon gives an excellent feeling of power. Katars are suitable for the rushdown style — you “jump” onto your opponent, find an opening in their defense, and keep pressuring till KO. This is a good Brawlhalla weapon for beginners. You take it and immediately feel the destructive might in your hands. And also, Katars have a very good growth potential. You can perform many combos with them, but that becomes possible only after a period of dedicated practice.

Axe in Brawlhalla is a heavy weapon, but it gives much more movement freedom than, for example, the Hammer. With Axe, your Legends can land pretty quick attacks. Still, the general speed is not that impressive. This weapon is great for dealing big damage all over the place — when you spin the Axe. Also, you can use strong launching attacks to quickly KO opponents.

This is rather a technical weapon that requires additional practice in the early stages. Then, you get versatile attacks to fight in many different situations. Brawlhalla Bow is good for confusing opponents with mixup options. It shines especially bright in the aerial game and can deliver some very powerful blows. The Bow is somewhat similar to the Blasters, but it has a smaller range and faster speed.

These things significantly improve the might of your fists. They are great for finding a quick opening and then keeping pressure with combos. Gauntlets are fast but don’t deal instant huge damage. One of the best things about them is the throw feature when your character launches the opponent pretty far away from the platform. To take the max out of it, you should be skilled in choosing the positioning. That and the quick movement around the map are two things to pay attention to while training with Gauntlets.

In fights, Brawlhalla Scythe feels very strong. Some attacks with this weapon easily launch the victim — if you know how to properly time them and where on the platforms it is better to use them. The Scythe is technical and might be tricky to play for beginners. But the result is worth the effort.

This is the biggest ranged weapon in Brawlhalla. It shoots massive projectiles and can be used as a melee weapon as well. In both cases, the Cannon is good for zoning and for dealing big damage. The weapon is pretty technical and can be compared to the Bow in this sense. It’s slow and requires some practice to succeed.

This weapon brings a bit of magic to Brawlhalla fights. Your character carries the Orb and uses it to hit opponents during Light Attacks. For signature attacks, it emits some magical energy. The Orb is not easy to use. It’s not that powerful at close range and asks for action precision in the air attacks and the long-range game.

This sword is huge and heavy. Greatsword obviously has its advantage in the impressive power — a few hits to destroy the opponents and then one last to launch them into oblivion. Handling such a weapon is challenging. You should time your attacks properly and be skilled in movements to avoid pressure from quicker Brawlhalla weapons.

The Joy of Learning the Weapons and Matchups

Brawlhalla is a super accessible game. You can start playing it and have fun from the first minutes. Moreover, you have to choose this light-hearted and joyful approach if you want to progress in these fights, get a better Brawlhalla Rank, and probably even enter the competitive scene.

Allow yourself to jump between characters to feel the best Brawlhalla weapons types for you. Then concentrate on those types you enjoy the most and take your time to adapt to them, go a bit deeper than the surface.

Pay special attention to the weapon combinations for different Legends. Some weapon types are better against others. It would be better to understand what your Legend should take to fight against Bow/Sword/Orb/Rocket Lancer.

While having fun playing Brawlhalla, you develop the basis for delving a bit deeper to start using tricky mechanics and understand frame data. Eventually, something that sounds awfully difficult now will become fun for you, and your whole journey in Brawlhalla will be filled with joy.

Meanwhile, DashFight will be here to provide you with various helpful and just interesting articles on Brawlhalla and fighting games in general. Stay tuned for fresh posts on Facebook and Twitter!