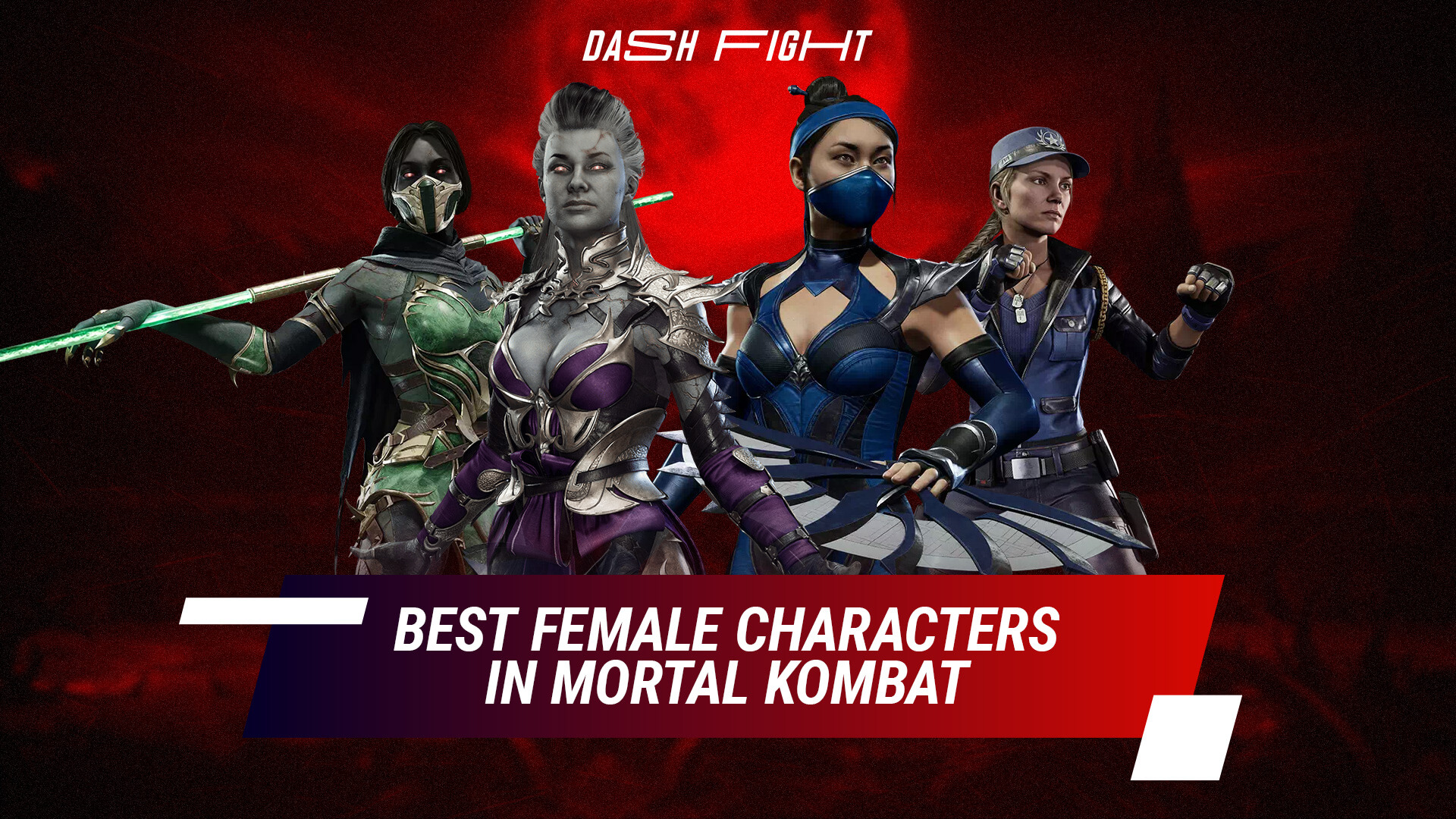 Warriors of all kinds can be found in Mortal Kombat. What else can you expect from one of the most popular fighting game series? However, only a small proportion of these characters are women. Although Sub-Zero and Raiden are well known for any Mortal Kombat game (and even among those who have never played MK, to be honest), Sonya Blade and her daughter Cassie also left their mark on the series.

Looking for real love in the world of Mortal Kombat 11 can be super dangerous - one wrong word on a date and a poor guy gets a series of bone-breaking punches. But wait a moment! That’s exactly what you look for in the best MK11 female characters!

Nevertheless, let's take a look at some of Mortal Kombat female characters!

One of the best players from the global MK 11 ranking DIZZYTT prefers female characters. His mains are SONYA and JACQUI BRIGGS (JB).

JB is also the main for DEOXYS and REWIND, who are right behind DIZZYTT in the global rankings.

Sonya is main for another TOP-10 player - SCAR.

The last TOP-10 participant - SEMIIJ chose CASSIE CAGE and KITANA as his mains.

Thus, female fighters are mains for 6 of the 10 best players in the world according to the Mortal Kombat 11 Global rating.

Sonya Blade became the first female character in the Mortal Kombat series. She appeared in the first game and has been a significant figure in almost every part ever since. She is an extremely agile character, her style is close combat, melee, in recent games, more technologies have been added for special moves like launching a drone. Of all the women in the series, Sonya Blade is number one in every sense. She is one of the truly iconic female fighters from MK. Also, Sonya Blade is one of the most well-known female characters from Mortal Kombat.

Don't let Cetrion fool you. Although she patronizes nature and life, she will not hesitate to tear her opponent to pieces in a matter of seconds. The real goddess, forcing other fighters to obey her, first appeared in Mortal Kombat 11.

Cetrion needs to keep opponents at a distance since her attacks are not quite suitable for close combat. She can create barriers between herself and opponents, as well as throw pieces of earth at them. She is one of the best female fighters in Mortal Kombat.

Sindel is the queen of Edenia, who was the wife of King Jerrod of the kingdom. After his death, she was forcibly taken into marriage by the invader-emperor of Outworld, Shao Kahn. Sindel stands out from other characters in the series as her appearance is in stark contrast to her nature. She has a gloomy, gothic appearance, but at the same time in character, she is a peaceful and wise ruler. Sindel also stands out from the rest of the female characters in the series, as she looks much older than the rest.

She has various magical powers. Sindel is one of the few characters in the series who can fly. In combat, she can use this ability to dodge enemy attacks or attack them from the air, while remaining out of reach of their attacks. She also knows how to stun opponents with her screams, an ability that makes her look like the banshee ghosts from Irish folklore.

Jade began her story in Mortal Kombat II as a hidden, non-playable character. It was practically Kitana, only in a different color scheme. As she joined the ranks of the playable characters, she developed her own personality and style, which made her one of the best fighters in the entire Mortal Kombat series.

She uses a bo staff and two razorangs, inflicting huge damage on her opponents. She can also perform the Shadow Flash move, in which enemy projectiles pass through her. Jade is completely devoted to Kitana and serves as her protector (though Kitana does not really seem to need any protection).

Kitana is one of the most famous female characters in MK. Her first appearance was in MK II. Her most recognizable move is probably tossing an enemy into the air and then attacking.

Interestingly, the developers had to weaken the original Kitana slightly so that she could be defeated not only by sheer luck.

Kitana also has a sense of justice as a character. She rebelled against Shao Kahn when she realized that he was leading her on a dark path, and proved that she is one of the most loyal heroes fighting for good.

If you are looking for a strong woman in Mortal Kombat, you can set your eyes on Sheeva. She belongs to the Shokans, a race of four-armed half-human-half-dragon creatures. If that doesn't impress you enough, the fighting style will definitely surprise you. With one pair of hands, Sheeva can grab his opponent and beat him with the second one.

She can also throw powerful fireballs that knock people off their feet rather than just pushing them back. And Sheeva can just stamp her foot and even this simple action will bring damage to the enemy.

Mileena is a monster. She was taken by Shang Tsung in his dark Pits of Flesh as a clone of Princess Kitana, but we are more interested in her fighting style than her biography. With her Edenian and Tarkatan origins, Mileena has incredible strength coupled with dizzying speed. Where Kitana uses two steel fans, Mileena prefers sais.

Tarkatan's sharp teeth also serve as a formidable weapon: She can use her Furious Bite to gnaw off an enemy's head. If you want to scare your opponent before beating him to death, Mileena should be one of your chosen fighters.

She was the result of a failed experiment but managed to achieve incredible skill.

Most of the heroine's moves are series of several hits.

She first appeared in Mortal Kombat: Deadly Alliance, and is still far from the first positions in the series. She belongs to the vampire race, so during the fight, she can drink the blood of her opponents. If this cannot strike fear into the hearts of the players, then what can? One of her best fighting moves is Blood Spit, which Nitara uses to launch a large ball of blood at her opponent.

The vampire may well compete with sorcerers who take the souls of their enemies: she deprives the victim of vitality, sucking all the blood out of it. She is not listed as iconic female fighters of Mortal Kombat fighters but deserves a spot on the list here.

For the first time, Sub-Zero's student appeared before the players in Mortal Kombat: Deadly Alliance. Frost is not as strong as her mentor (this was especially evident during her attempt to take the place of Grandmaster Lin Kuei), but she is quite fast.

To play as Frost, gamers need strategic skills. To use most of her techniques, you need to take an exact position towards the enemy. Of course, she's not Sub-Zero, but she's also good at combat.

Since she is the daughter of Johnny Cage and Sonya Blade's characters, it is logical that she possesses the abilities of her parents. Having received combat training with the help of her mother, Cassie knows how to handle firearms and has skills in hand-to-hand combat. She also inherited her father's superpowers, which are manifested in a green aura that surrounds her body during certain movements.

Plus, adding Cassie to Mortal Kombat X definitely adds to the story's edge as players learn what it's like to have Johnny Cage and Sonya Blade as parents.

Along with her best friend Cassie Cage, Jacqui Briggs made her debut in Mortal Kombat X. Although she does not possess the divine powers of other fighters, she should not be underestimated for this. She is the daughter of Jackson Briggs and Vera Briggs. Her strong point is close combat skills and must be reckoned with. In addition, she has a wide range of techniques that can help players to corner opponents, and her practicality and tactical knowledge allow her to fight on the spot of rather persistent enemies.

The delectable Skarlet was rumored to have been around since Mortal Kombat II, although in truth, it seems she was nothing more than a coding glitch. She did join the cast for real in the 2011 Mortal Kombat. Originally depicted as a genetic experiment by Emperor Shao Kahn using the blood of several enemies and magic, Skarlet got something of a makeover when the series was retconned. In the new timeline, she is the adopted daughter of Shao Kahn and, much like Mileena, is steadfastly loyal to the emperor. Her skill with blood makes her one of the most powerful warriors in Shao Kahn's arsenal. Skarlet is fascinated by blood and Edenian blood, in particular, holds her spellbound. On the other hand, she is repulsed by Kytinn blood (D'Vorah), which adversely affects her.

She is a reliable fighter and a worthy representative of female characters from Mortal Kombat. She is not only good at hand-to-hand combat but also has magical abilities. One of her abilities looks like a purple fireball. Like Frost, Li Mei was introduced to players in Mortal Kombat: Deadly Alliance. One of Li Mei's main strengths as a fighter is the availability of four special moves from the first game, while most other characters only have two or three.

A unique character introduced to players in Mortal Kombat X. She is an insectoid, representing something like a colony of insects in a humanoid body. This, of course, makes it possible to make very interesting combat moves. D'Vorah's preferable battle style is a long-distance fight, as she can throw bugs from her body at opponents. Some of the techniques involve poisoning opponents, the poison can negatively affect other fighters for a long time.

Teleporting behind opponents when they least expect it, reversing time, and freezing opponents in place are just a part of her abilities.

Who will be your choice?
Will you be able to adequately resist them in battle? See how professionals cope with this task at the tournament, which will start soon in Kyiv. Also, you will find something useful there.

To allow your Mortal Kombat 11 female fighters to change their appearances as often as they want to, collect lots of cosmetic items in Krypt. This guide will help to not miss anything.