Shao Kahn (Shao Khan) is one of the first bosses in the Mortal Kombat fighting game series. In the new parts of the series, he periodically becomes available as a regular playable character.Know more 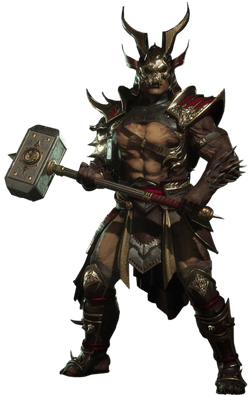 Shao Kahn is one of the main negative characters in the Mortal Kombat series of games, the emperor of Outworld (his name is often misspelled, like Shao Kahn. In many respects, he has similarities with Asian generals of the Middle Ages (helmet and clothing), personifies evil in many manifestations. Kahn is known for his power as a god, extreme cruelty, and rudeness towards his enemies and towards allies, but he managed to rise above a simple commander solely due to his intellectual abilities. Shao Kahn's strengths are his enormous willpower to achieve his goals and his ability to organize, while his weaknesses are his arrogance and self-confidence.