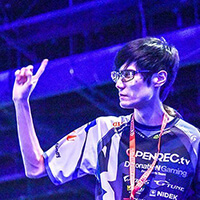 Yuta "Nietono" Uejima (にえとの) is a Japanese competitive gamer in Super Smash Bros and a member of the DetonatioN Gaming team. He uses Pichu as his SSBU main with Meta Knight and Wario as his secondaries.

Nietono is currently ranked 27th Fall on the 2019 PGRU and 14th on the Japan Player Rankings for Ultimate. Hailed as one of the top Pichu players in the world, Nietono's main for Wii U was Sheik and Olimar for Brawl with whom he won 2nd place at Apex 2012.

Nietono has had good runs in sumabura sp singles at tournaments like , ranking 1st at Umebura SP3, 3rd at EVO 2018, 7th at Eastern Powerhouse Invitational, 25th at EVO Japan 2020, 49th at Genesis 6, and 9th at Frostbite 2020 after losing to zachary.