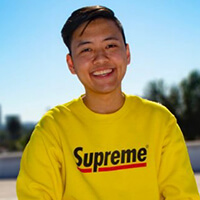 Danial "HamBam" Liang is a fighting games competitor from Boston, US. He's displaying mostly at Street Fighter V tournaments but also took part in some Dragon Ball FighterZ, Marvel vs Capcom, and SSB Melee and Wii U events. At DreamHack Anaheim 2020 he took 2nd place in Street Fighter V tournament, defeated by Commander Jesse in the Grand Final. He also appeared at Combo Breaker in 2018 and 2019, and at EVO Japan 2018.

HamBam is also got an active Twitch channel.