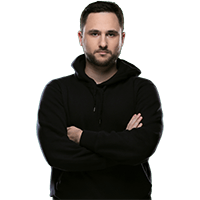 Yuri "Dubasik" Kalachev is a Russian fighting games player from Saint Petersburg who co-mains Jade and Sindel. He made his competitive debut at the Moscow Fighting Arena 2018 Tournament and has since participated in various events including WePlay! Dragon Temple 2020,  Lockdown Throwdown, Saint Punch 2018, vienniality 2019, Russian Reversal 2019, and Interkontinental Kombat EU East 2019.

Dubasik competed in the Celtic Throwdown 2019 where he ranked 13th place out of 103 entrants in the Mortal Kombat 11 event. With a set win rate of 60%, he scored dominant wins against Pool C3 participants MattStarChief in the winners quarter-final and Zoom_fgc in the winners semi-final.

He lost his winners final match regardless of his impressive performance to Dominique "SonicFox" McLean hereby securing a slot in the losers Top 24 bracket SF1 Pool. He crashed out of the event in the losers second round after he lost to George "Grr" Foulkes.  has earned total prize money from these tournaments.

Champions of the Realms EU Invitational