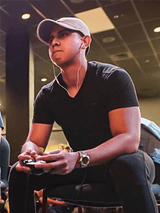 Cyro is a competitive Super Smash Bros. Brawl, Ultimate, and Wii U player from Southern California in the USA. In Ultimate, he mains Roy and Meta Knight with Chrom as his secondary character.

A member of team Mazer Gaming, Cyro has competed in both SSBU doubles and singles. He also participated in EVO 2019, The Kid, the Goat, and the Mango, Super Smashed Fest, and 2GG: Prime Saga.

At DreamHack Anaheim 2020, Cyro took 7th place in singles and 3rd place in doubles with regular partner ShiNe. Similarly, he teamed up with Mr. E in doubles at Let's Make Big Moves and ranked 7th after losing to RFang and LeoN. However, he ranked 129th in ssbu singles.