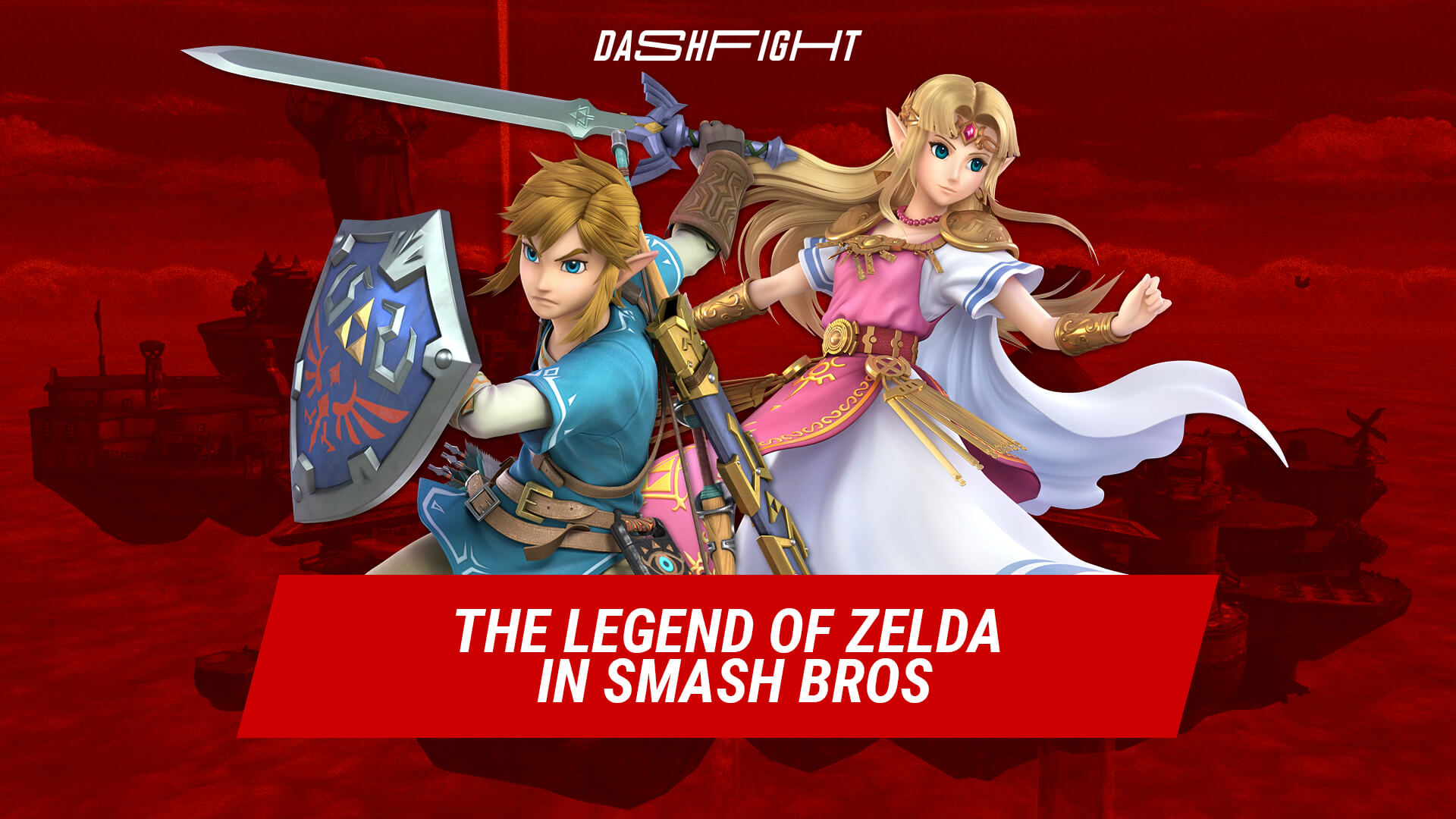 #Evergreen#Guide
35 years ago, Nintendo released the first The Legend of Zelda game. Now, it’s a huge franchise with a powerful branch in Super Smash Bros.

One of the greatest features of the Smash Bros. game series is how it mixes various absolutely different universes. It would be hard to imagine any other chance for Mario to meet Ryu from Street Fighter or for Ganondorf to fight against Pokémon Charizard. And also, the Nintendo fighting is a unique opportunity to have new and unexpected shades of gaming fun with your life-long favorite characters. Could you imagine that Yoshi is a very good fighter and can confront Samus Aran from Metroid? And could you dream of controlling Zelda in a powerful battle against Isabelle from Animal Crossing?

Talking about Zelda and Ganondorf - they come from the game series that is far away from the fighting genre, and still, these heroes have become an integral part of the Super Smash Bros. series. Have you ever wondered how that happened, what their original games are, who from that world is the strongest fighter, and who can still be a perfect addition to the Smash Bros. roster? In this article, you’ll find the answers and some other interesting info. We have a super special occasion - on February 21, 2021, the whole gaming world celebrates the 35th anniversary of The Legend of Zelda. We at DashFight just couldn’t miss this date because we love Smash, we love Zelda, and we love gaming. What about you?

That would be something - to see the reaction of Shigeru Miyamoto if he had discovered in 1986 that Link, the hero of his fresh The Legend of Zelda, will become a character of a fighting game. Ok, that original adventure has battles, but still, it’s mostly about exploration, solving puzzles, and collecting items. Originally, Link and certainly Zelda were too far away from a classic image of fighters.

In fact, the situation is the same in all the other core games. Nintendo has released quite a lot of them for 35 years.

Original The Legend of Zelda games - the core series

That’s a lot of games, don’t you think? And if you are a Smash fan, you may have devices to play them. Another question is - do you need to do so to be a good Smash player?

You definitely understand the fighters better if you have experience in their original adventures. Still, we can save you some time. Let’s figure out who these characters are, thanks to these short descriptions!

He is a brave hero, ready to battle evil and save the world. Link often starts his adventures with empty hands - even the sword and shield are hidden somewhere, so he needs to find them to really become a warrior. Then he explores territories and collects various items to get access to dangerous dungeons, pass complicated puzzles, defeat a boss there, and obtain additional weapons or magical objects that are crucial for continuing the game. Most of the time, Link must obtain all the pieces of Triforce and then defeat the main bad guy, Ganondorf.

In Super Smash Bros. Ultimate, the developers use the appearance of Link from Breath of the Wild. The guy has his sword here and uses this weapon quite effectively in mid-range fights. To reach distant opponents, Link throws his boomerang and shoots arrows. He even has a bomb with remote control.

The basic attacks of Link are relatively straightforward. Still, his bomb is a complicated feature, and to get the max from it, you need some experience in the game.

We meet this Link in the game Ocarina of Time. It’s a starting form of the hero, when the evil forces haven’t gained too much power, and the world is still a safe place, at least during the daytime. After some events, Young Link grows up very quickly - play the game if you are interested.

Young Link in SSBU is super fast, and it’s his key distinguishing feature. He gives you tools for various playing styles, but controlling him in fights is not that easy. Attacks of Young Link are the most effective in close range. He is not too powerful, so quite a lot of efforts are needed to KO an opponent, especially big and heavy. Recovery options of Young Link in Smash Ultimate are not the best.

To play Young Link effectively, you should properly learn his tools and be super quick in thinking and reacting.

This is a form of Link from The Wind Waker. Despite the cartoonish style, this is the same brave hero with the same kind heart. The bad guys should be careful and not get fooled by those big eyes and charming colors.

Toon Link is a master of projectiles, fast attacks, and lightning movements in Super Smash Bros. Ultimate. It seems like this fighter has absorbed many great features of his adult and young forms and turned them into an explosive mix. But of course, players need advanced skills to get the max out of this cartoony boy. His downside is high vulnerability. Using the shield and jumping a lot will help to avoid the opponent’s attacks. Toon Link also has problems with landings, though - they are slow.

You’ll find her name in each original game, but Zelda is usually a secondary character, like a distant dream of Link. She rarely takes part in the action. Her power is in motivating Link.

Still, her role is essential - Zelda is the legend herself. It was she who split Triforce into pieces to keep this power away from Ganondorf. And she definitely does everything to help Link, even if she needs to remain incognito.

The Princess was present in most previous Smash Bros. games, but players did not like her. In fact, Zelda was a bad fighter. But Smash Ultimate changed the situation. Now, she is not at the bottom of tier lists anymore.

Zelda has very decent Jabs and Tilts (with beautiful colorful splashes). Her aerial attacks are effective but have bad landings. She is good in throws, but the grab is unsafe. Special moves of Zelda in Smash Ultimate give nice projectiles and reliable projectile protection. Her Down B is unique - Zelda summons Phantom. It’s powerful support that requires good skills from the player. The style of this fighter is defensive.

In Ocarina of Time, a mysterious person helps Link during his adventure. Sheik never allows close contact, as if hiding something. Only much later, Link discovered that Sheik is … ok, let’s avoid spoilers even if they are obvious for so many gamers.

Speed is the primary weapon of Sheik in SSBU. She moves quickly, and her attacks are swift. Still, her power is not that impressive, so players need to continually run all over the platforms to try and land many attacks - it’s the best option for Sheik to win matches. With light and mid-weight opponents, Sheik should choose the close-range fight. Heavy fighters are too dangerous for her, so Sheik should keep a safe distance.

One of the best features of playing this character is how cool she looks in the matches. You may find it difficult to damage opponents properly, but the fighting process will be quite entertaining.

He is one of the best evil bosses in the gaming culture. Ganondorf looks impressively dangerous, and his power is legendary! Link has to gain a lot of might even to start the fight. Ganondorf wants to capture Zelda and conquer the world. Triforce is crucial for this plan.

In Smash Ultimate, Ganon is big, heavy, and slow. His attacks are very strong and deal lots of damage, But at the same time, they have significant lags and are easily punishable. Fast opponents with good projectiles can be super dangerous for this guy.

Ganondorf fights with a giant sword in his hands - he uses this weapon for smash attacks and can easily KO opponents. The art of playing this Zelda character in SSBU is actually to land the attacks.

The best Zelda character in SSBU

Do you like tier-lists and matchup charts? Yep, they can be helpful - for choosing your main or for making priorities in the fighting practice. Also, making such rankings of Smash characters is a lot of fun. It allows you to start communication with other players. All the tier lists and matchup charts are subjective and depend on personal preferences and unique skills. Someone will undoubtedly disagree, people will start to express their opinions, and what a nice gaming mess can begin…

So, anyway, let’s make a small tier list only for Zelda characters in Smash. Are you ready?

Being a strong character doesn’t mean being accessible. It’s advised for newcomers to Smash Ultimate to gain the basic experience with as many fighters as possible and only then choose your main. But what if you want to practice with someone from the Zelda games? Who’s the most accessible among them?

How did these characters make it to the fighting genre? The very idea of Smash Bros. games was to gather together the most popular universes of Nintendo - and obviously, Zelda was among them. Or rather that was Link, and Zelda came later, and then… Oh, let’s make a list already!

The Legend of Zelda is one of the biggest franchises of Nintendo. And that gives hope to many Smash and Zelda fans - to have someone else from that adventurous universe.

We still have spots in the Fighters Pass Vol. 2. Could Zelda heroes take one of them? Probably, only Masahiro Sakurai, the creator of Smash, knows for sure. But no one can stop us from dreaming big, right?

So, who from the Zelda game series we want to see in Super Smash Bros. Ultimate?

Smash players have a chance to enjoy lots of content from the Zelda series, such as amazing music and a few stages. And here they are - nine Zelda stages in Smash Ultimate:

Also, the game has lots of Zelda SSBU spirits. How many of them have you got in the collection?

35 years of the Zelda games is an impressive period. Gamers have been experiencing so many adventures, and even more are ahead. We heartily congratulate Nintendo on this brilliant achievement. Thanks for the core series and, of course, for Zelda heroes in Smash!

Do you like Zelda games? Do you play Zelda characters in Smash? Please, let us know on DashFight Forum.

For more Smash articles and the most exciting fighting games news, stay in tune with DashFIght on Twitter, Facebook, and Discord.