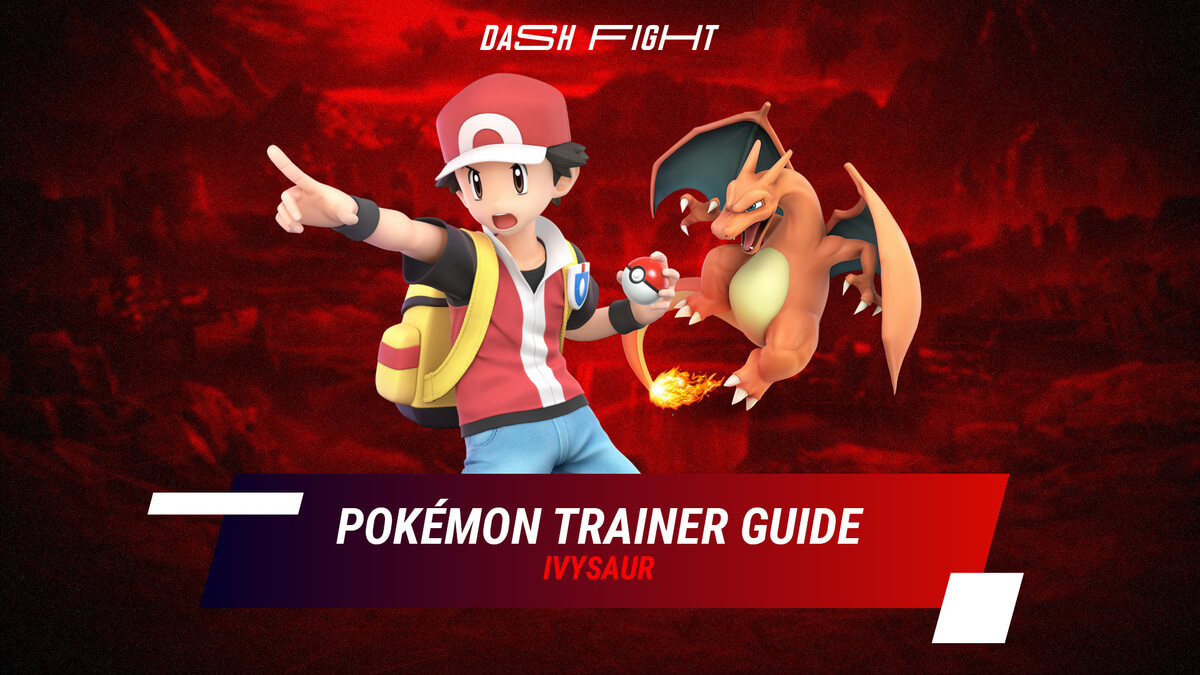 Nintendo
#Guide#Evergreen
Take control over the full power of Pokémon Trainer with his mightiest creature - the fire dragon Charizard.

Having three different characters instead of only one - this opens quite a lot of possible strategies in a match of Super Smash Bros. Ultimate. Pokémon Trainer uses three fantastic creatures to defeat all sorts of opponents and be a brilliant fighter in almost any game situation. Do you like this idea of a close to perfect versatility? Then get prepared for a bit bigger amount of learning and practice! Because to play Smash Ultimate Pokémon Trainer effectively, you should master movesets for all three Pokémon!

Of course, like with many aspects of SSBU and other fighting games (such as Street Fighter V and Tekken 7), DashFight is here to help. Let’s delve into our guide on Charizard!

Squirtle is the fastest but also the weakest one among three creatures. Players often use this water type Pokémon for dealing initial damage. Get more info in our SSBU guide on Squitle’s moveset.

Ivysaur is the first evolution of the grass type Pokémon Bulbasaur. He is a bit bigger and has a few middle-range attacks. We have described this creature in more detail in the SSBU guide on Ivysaur’s moveset.

Charizard is the biggest and mightiest one. And he is easily one of the most popular Pokémon ever (he can’t compete with Pikachu though). In fact, he is a huge fire dragon, and people love dragons in video games. (If you love fire without dragons, you can take a look at the fire can Incineroar)

Super Smash Bros Ultimate Pokémon Trainer usually switches to Charizard on rather high percentages of damage. The dragon is very strong and heavy, but at the same time, he is quite fast and has very good recovery options.

SIgnificant power of this fighter gives more chances to land a finishing attack. A heavy weight allows Trainer to stay in the match for a long time.

Pokémon Trainer can switch between the creatures only in a specific sequence: Squirtle -> Ivysaur -> Charizard -> Squirtle. You can speed up the switching process by using an attack right after the next Pokémon appear on the platform.

The Pokémon changing option opens new possibilities for recovery - and this technique is worth training. For example, you can switch from Ivysaur to Charizard, who is much better in recovery.

Playing Pokémon Trainer gives you lots of options. For example, you can change the active creature to quickly match the opponent and their playing style (Squirtle for someone slow and heavy; Ivusaur to fight on a distance and against fighters with projectiles; Charizard against small opponents). Learning them all may take some time but this investment is quite rewarding - you will be able to come up with brilliant Pokémon Trainer combos for different situations and get many victories. Hopefully our Smash Ultimate Pokémon Trainer guide will be helpful in your fun and exciting fighting practice.

For beginners in this Nintendo fighting, we recommend checking out our post How to Play Super Smash Bros. Ultimate.