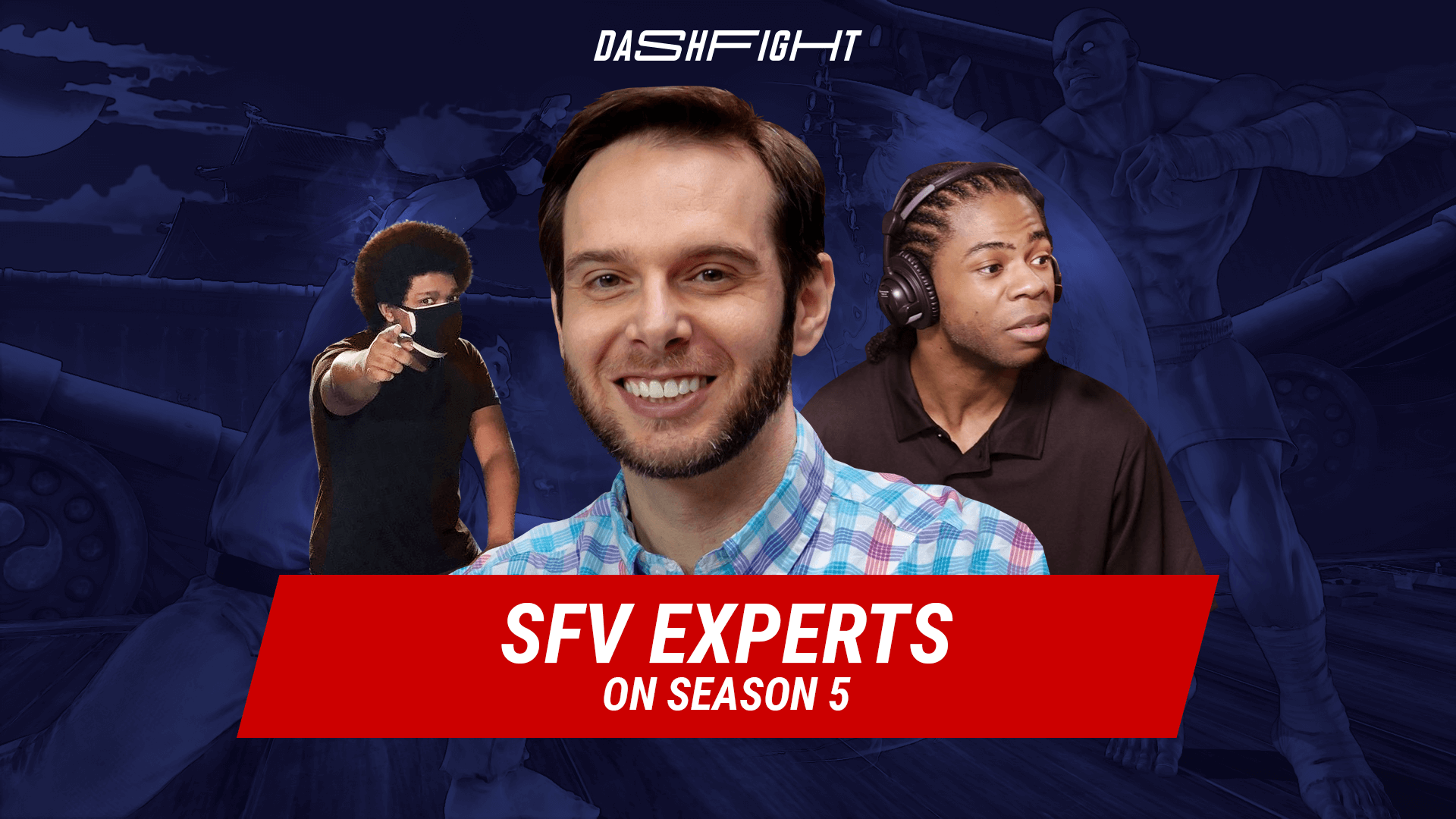 It’s been around three weeks since Capcom introduced big changes of Season 5 in Street Fighter V. The community was expecting to get something significant, and the details revealed at Street Fighter Winter Update even surprised players by the developers’ determination to bring super special stuff into the final season. Now, when we all had a chance to check out our updated mains, explore V-Shift, and mess with Dan, it’s time to talk about the general impact of these adjustments and additions on the game as an esports discipline.

We asked these questions to those guys who really know Street Fighter very well and see the big picture of the esports scene. I, EugeneZH, contacted a few experts, so now you can check out the answers of UltraDavid, Saint Cola, and Jammerz. Yep, you definitely met them at streams of various Street Fighter pro tournaments.

V-Shift is definitely a game-changer in SFV. It has a ton of impact on strategy and decision making, including in everything from the wakeup game to footsies to on-reaction punishes, and probably also other stuff that we haven't even realized yet. It helps some characters more than others and probably hurts some characters overall. I think it's such a significant addition that it'll take a while for us to realize all the ways that it changes the game. At the same time, I'm really happy that it also has clear counterplay. It's strong without being too strong, so it's a great new feature.

I'm sure some top players will switch characters since that always happens with at least some of them. But I feel that characters who were already strong remain strong, so there's no need for players to drop them entirely. And I feel that characters who weren't as strong have gotten stronger, meaning that players who mained them will probably have better performances this season, and players who wanted to main them but chose not to because they weren't strong enough will now be able to play the characters they prefer. This might lead to players who didn't do as well before now having more success, but I don't think that'll be unexpected really.

In my view, Dan is a really strong character. It's too early to say how strong since so much changed this season that nobody knows it all yet, but I definitely feel that Dan can win tournaments. In fact, there's no need for me even to guess: Punk has already used him to win NLBC, one of the strongest weekly tournaments in the world. Dan is also really fun, allows for lots of creativity, and his silly personality comes across really well, so I can see him becoming a popular character.

I already loved SFV last season, and overall, SFV Season 3 and on has already been one of my favorite fighting games of all time. I don't know enough yet to say that I think Season 5 is an improvement since it's always possible that we'll find something game-breaking with a new mechanic as impactful as V-Shift. But my expectation is that this season will be the best season of SFV yet! I wish SFV had launched with this current version of the game back in 2016, but I'm really glad that it's become such a great game in the end.

UltraDavid with his fellow commentators make super interesting streams on the UltraChenTV Twitch channel. Follow it to delve into various exciting dimensions of the fighting games multiverse.

It's very much a game-changer. So much so I don't think it's fully been tapped into yet despite every region drilling out new tech on the daily. I think because it's so deep, only the top level players are going to get the most out of it, so it'll possibly make the skill gap even larger, which is a good thing.

From what I've seen, many people are dabbling in secondaries or entertaining the idea of switching, but until circuit tournaments start up again, I think many are in the discovery phase. At local tournaments, we've already seen the likes of Alex, Ryu, and Falke reach top 8s, but time will tell as things evolve.

Dan seems good! He's very sticky and has great pressure. Personally, I don't think his neutral is all that great, so he'll need a secondary to back him up unless you are absolutely godlike.

It's the best it's been for SFV. The variety of characters combined with this new V-Shift mechanic is bringing more people back and opening up more to the meta. I think we are going to see way more interesting fights because of this season!

Personally I do feel the new V-Shift mechanic is a game-changer, a big one at that. It makes other defensive mechanics in SFV that were not useful before seem quite potent now (i.e. backdash, V-Reversal etc.)

At the highest level of play, people will definitely see the beauty of the mechanic, it will just take some time for pro players to implement it properly.

In regards to the recent character adjustments, I think you can expect players to add to their arsenal of characters instead of completely changing mains (with the exception of a handful of players, i.e. Daigo, Tokido, etc.). Some characters got a substantial amount of changes whilst others barely got touched or a slap on the wrist, and people have to remember that Capcom had to be careful with the balance changes in this version due to the introduction of V-Shift.

As for unexpected tournament results - who knows. Each and every year of SFV, something new and special has happened tournament wise. I feel this year will be no different.

I personally have zero interest in Dan as a character. But from what players have been telling me and what I have seen on social media, he is definitely entertaining and has quite a bit of depth to him.

Is he good enough to fight at pro events? I do not think he will perform well at the highest level because there are too many hurdles he has to overcome to take 'control' of a match. I feel the zoner archetype (Poison, Dhalsim, Menat, Falke) and the big bodies (Birdie, Abigail, Zangief) will probably make it extremely difficult for him to obtain the victory.

Season 5 of SFV, to me, definitely feels like an improvement overall, but it's all based on perception (depends on which character you play). My character Poison got a slap on the wrist, and I love experimenting with V-Shift, but there are players out there whose character either got normalised or V-Shift makes it much harder for them to win now, which probably doesn't make things as enjoyable for them.

SFV has always been a game thousands of people watch, even if they don't actively play it. The game is in a good place right now, and with the new battle mechanic and more characters on the way, events are most certainly going to be more interesting - for both players and spectators alike.

To enjoy Jammerz playing Street Fighter, learn lots of tricks from him, and just have lots of fighting games fun, take a look at his Twitch channel and hit that Follow button.

Can we call the whole Season 5 a swan song of Street Fighter V? Probably yes, the next game of this legendary series can't be too far away. Still, this will definitely be a long song, so fasten your seatbelt and enjoy - we have lots of matches and so many pro esports tournaments, and the journey won’t be boring.

Would you like to remember Street Fighter V before Season 5 has become an actual thing? Then treat yourself to watching powerful fights of Capcom Pro Tour 2020 Season Final. You’ll meet Saint Cola among commentators and UltraDavid among analysts.

For seeing Season 5 in practice, check out the series of weekly Street Fighter streams SETS with Jammerz as one of the hosts.