MultiVersus vs Smash Ultimate (and vs Brawlhalla) 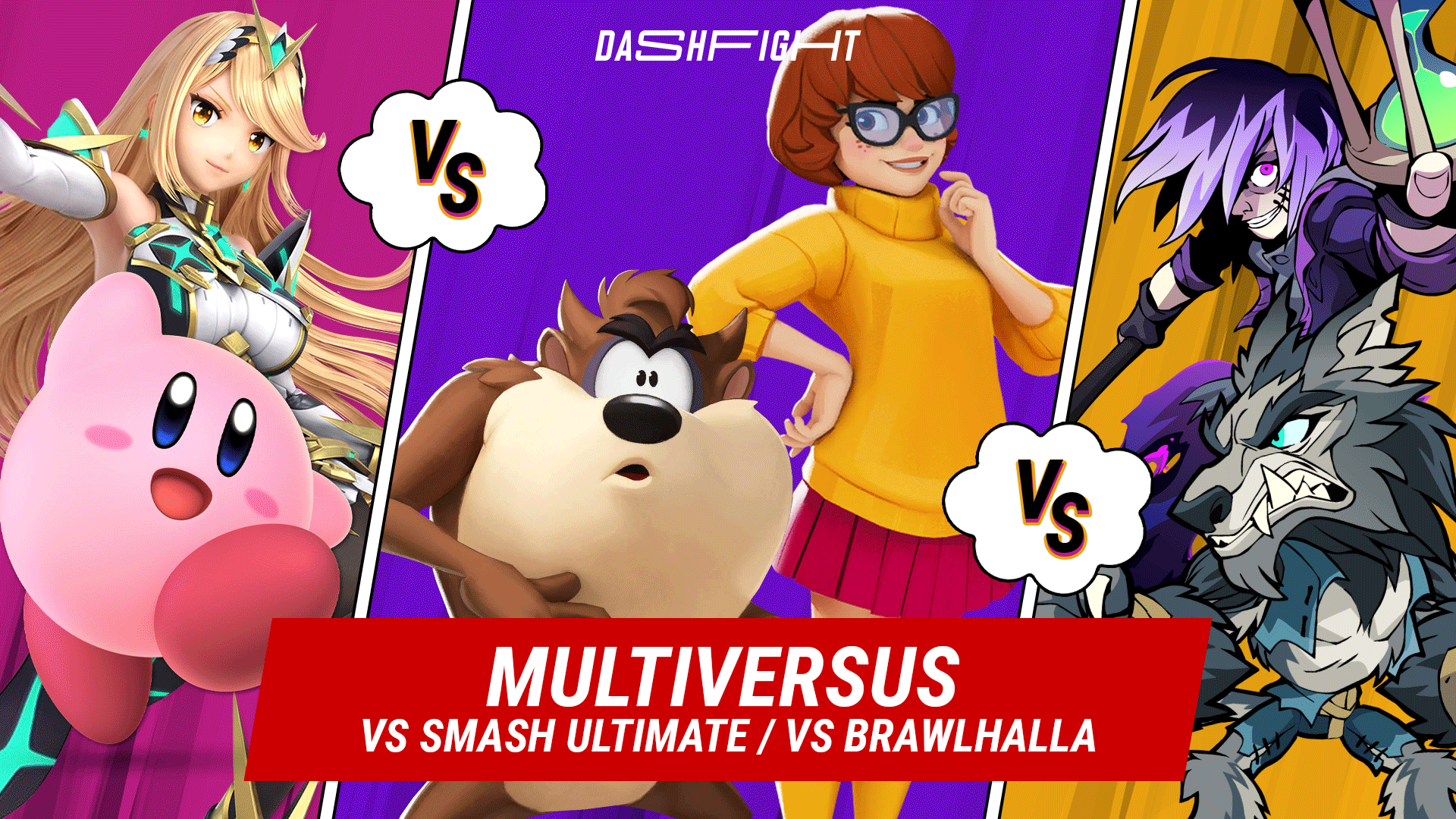 It does not seem like a good thing to discuss which fighting game is better. Only on some rare occasions can we have a universal and objective conclusion. In most cases, it’s just personal preferences and subjective opinions.

That’s why let me start with this statement — MultiVersus is not better or worse than Smash Ultimate and Brawlhalla. They are totally different games with their unique approaches to fighting mechanics, monetization, and interaction with the community.

Still, why not highlight similarities and differences between this new game and its successful predecessors? The whole fighting games community is now interested in MultiVersus — it is free-to-play, has well-known characters, and offers impressive esports prizes. So, what does the game consist of? Which of its “components” are borrowed from the competitors, and what is creatively fresh? And what to pay attention to if you come to MultiVersus from Smash or Brawlhalla?

It would be kind of respectful to start with the biggest unique aspect of MultiVersus — its primary focus on 2v2 matches.

Well, such an option is present in both Smash Ultimate and Brawlhalla, but only MultiVersus has team-based mechanics. For example, you can pull your partner back on the platform and help them be more aggressive offstage. Or you can create shield walls to block opponents. The movesets were created with team-based matches in mind. It is absolutely awesome!

Players who come from Smash and Brawlhalla (and actually from the other fighting games) should pay attention to this aspect.

This is another relatively unique aspect. You choose power-ups and improve some fighting abilities for your character.

Smash Ultimate has that with Spirits — in the Adventure mode. MultiVerse gives perks for multiplayer matches.

When you get many perks, they might help you emphasize a specific fighting style, so the idea is pretty cool.

Brawlhalla allows the players to adjust abilities of the characters — but something can be strengthened here only by weakening something else. Perks don't apply automatic weaknesses.

Here we have a hard hit on Smash. You can play MultiVersus on PC, Xbox, and PlayStation (not Switch, though). The cross-play is available on all the platforms.

Brawlhalla did that even better as it has Switch and Mobile players in addition to that. Perhaps, MVS will be able to expand its presence in the future.

The free-to-play monetization model is tricky. On the one hand, it’s easier to attract many players. On the other hand, the project should be profitable. Again, the approach of MultiVersus is similar to Brawlhalla.

Players get the game with free rotation of the characters. You can buy them for real-world money or for in-game currency. With little dedication, you easily unlock fighters you are interested in.

Also, you can purchase Battle Pass and have extra stuff in the game.

No pay-to-win mechanics have been noticed.

It’s hard not to see this elephant in the room. The idea of putting famous characters from various franchises into a platformer fighting game obviously comes from Super Smash Bros. The difference is only in IPs — Nintendo uses their games and products of their partners. MultiVersus has access to the characters of its publisher, Warner Bros. Discovery.

Such an idea is excellent, but it certainly is not a recipe for success. Nickelodeon All-Star Brawl has great cartoon celebrities, but the production value, the lack of the cross-play feature, and the monetization approach did not let the game become a hit.

MultiVersus has great potential here. The celebrities of this game are as popular as Mario or Donkey Kong. And it seems like the developers are not going to repeat the mistakes of NASB.

Brawlhalla has mostly original characters in the roster. The game has crossover skins and some Ubisoft characters as the Legends. Still, they are not the main point of attracting players.

MultiVersus gives clear hints on what to expect from a fighter. For example, Batman is a bruiser, and Iron Giant is a hybrid for expert players. This idea has been nicely implemented in Guilty Gear -Strive-.

For Smash and Brawlhalla players, MultiVersus offers a pretty straightforward fighting system. The characters have normal attacks, aerials, and specials. All of them change in combination with directional input.

You can just take a character to a fight, press buttons and see what happens. Sure, only regular practice will give a better understanding of the moveset and therefore good results.

Special moves are spectacular in MultiVersus — they give characters their unique personalities and open various opportunities in matches. But the game did not try to invent the wheel. Apart from the team mechanics, the characters could totally have these movesets in Smash.

The game still has some fresh ideas, such as cooldowns for some powerful specials. But it’s hard to call them revolutionary game changers.

In its defensive mechanics, MultiVersus got more from Brawlhalla than from Smash. Most characters here have no shield — only Steven Universe creates a protective bubble for himself and his teammate. A standard option is dodge, when a character becomes invincible for a few moments.

Smash players should adapt to this. And if you come from classic fighting games, take your time to learn this feature.

And again, MultiVersus uses spices from the cooking book of Brawlhalla. Instead of ledges, characters in this game can touch the walls to reset the number of available jumps and air specials.

It‘s another thing Smash players should adapt to.

Let’s be honest, single-player content is not the strongest part of MultiVersus. The game is all about playing against other human beings. And this is totally cool.

Smash Ultimate offers the World of Light adventure and the Classic mode to let you explore the fighting environment. In fact, you can spend hours upon hours in Smash single-player fights.

MultiVersus has pretty Advanced Tutorials and the option to use bots instead of real opponents. It’s good for beginners, but most players will not decide “I’ll play against bots today, it’s so fun.”

This is the approach of Brawlhalla once again. With minor exclusions, everything is about multiplayer here.

Despite having quite a few elements very similar to those from Smash and Brawlhalla, MultiVersus is a pretty unique game. Playing it feels authentic!

The gameplay itself is more Smash-like — mainly thanks to the famous characters and the awesome variety of special moves. The experience around MultiVersus strongly reminds Brawlhalla’s monetization ideas, as both games have implemented the free-to-play model in a flawless way.

It is easy to expect powerful attention from the community to MultiVersus. New characters create proper fuss. Big prize pools attract esports professionals. The game definitely deserves to be successful.

And it’s unlikely this success will affect the competitors too much. Smash Ultimate approaches the end of its life cycle, but for dedicated players, it cannot be replaced with MultiVersus. Brawlhalla is similar on paper, but in practice it feels so much different; you can not have the same fights in MultiVersus.

The only game of the genre that definitely suffers is Nickelodeon All-Star Brawl. MultiVersus has done everything much better.

Do you enjoy MultiVersus? Then see you in the fights!