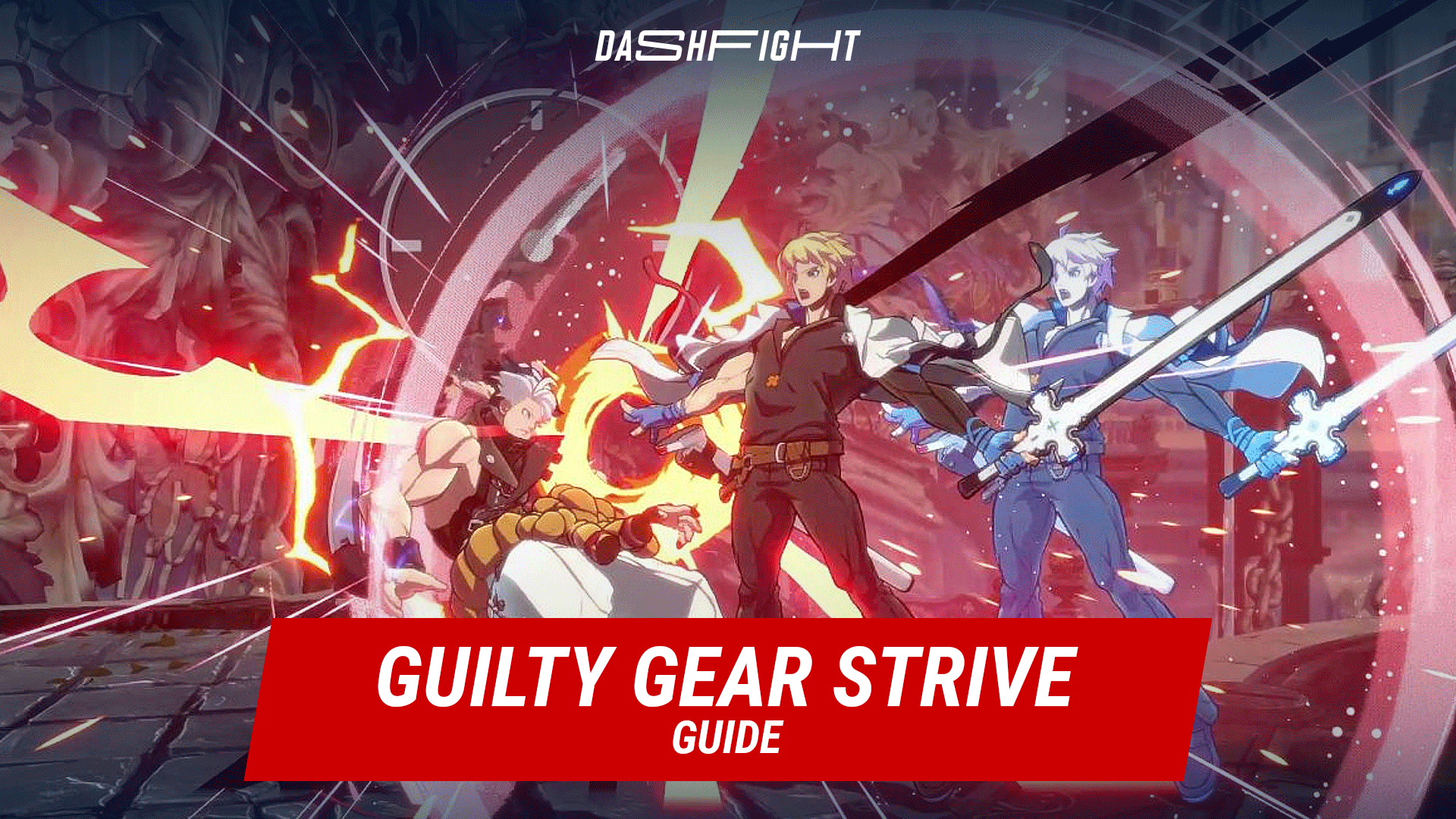 Guilty Gear -STRIVE- was released back in June to wild fanfare as fighting game fans and neutrals alike were blown away by the beautiful graphics, phenomenal score, and unique game mechanics. While -STRIVE- could arguably be the most popular in the Guilty Gear series, it is by no means the only one.

The Guilty Gear series has been around since 1998 and -STRIVE-, its latest offering, has, for the most part, followed the Guilty Gear formula. That said, -STRIVE- is a very modern game and is made in a perfectly balanced way that walks the treacherous tightrope of accessibility for newbies and depth for veterans.

So, if there was ever a time to get into Guilty Gear, it is now, and to help with that, we have this guide to gently hold your hand and help you navigate your way through the winding alleyways to becoming a Guilty Gear player.

To Main or not to Main

So, the topic of picking a main is a contentious one, but we’ll try to simplify it as much as possible. There are generally two schools of thought when it comes to picking a main— the ‘Pick whoever you feel comfortable with’ school, and the ‘These are probably the best to start off with’ school. I am firmly in the second school, and with a game like Guilty Gear, it is even more important to start well. So, while GGST is the most accessible game to the newbie in the entire series, it is still a Guilty Gear game, and the characters are all unique. For the beginner, it is best to pick an easy character and learn the basics before trying out someone trickier. Guilty Gear -STRIVE- doesn’t have the largest roster (18 characters so far), so your choices are limited. This could play to your advantage as it doesn’t take too much time before finding someone to work with. In terms of ease, the game does a good job in helping you identify which character will be easier and more accessible. They do this via the character select screen where each character has a star value attached to them that shows how easy or difficult it is to use them. Based on this, most beginners are advised to go with Ky or Giovanni as they have easy-to-follow moves and playstyles.

For a lot of people, the first thing they do when they pick up a fighting game is to find a challenger and start fighting. This is a terrible idea as it is the equivalent of a swimming novice going to the beach and trying to swim in the ocean; you’ll get eaten alive. So, where do you start playing Guilty Gear -STRIVE-? You can go into training mode, but may I suggest trying out the Dojo game mode? This is a mode that gives you a couple of missions and, in this way, acts as training wheels as you come to grips with the core mechanics of the game. It’s even better because it has various difficulty levels, which means you can pace yourself and learn the game at a steady pace. In the beginning, you might be unable to clear the four or five-star missions, but with constant practice, you’ll be able to prevail.

Guilty Gear -STRIVE- is what is called a ‘5-button’ game. This means that there are essentially five buttons you need to pay attention to:

For the most part, these moves are self-explanatory, and you only need to familiarize yourself with them. Once you learn what button corresponds with a situation, you’ll be well on your way to becoming a pro.

However, learning the buttons isn’t all there is to it, so we must talk about…

‘Footsies’ is a term you’ll certainly come across in fighting games. It essentially means the art of mastering movement and spacing in such as way as to understand when to press a button and when to avoid it. In Guilty Gear -STRIVE- movement is critical to gameplay and must be understood perfectly. As with most 2D fighting games, there are four directional inputs: Up, Down, Back, and Forward. It’s the same here, but you can also double-tap any of these buttons to ‘emphasize’ the move. Therefore, if you tap forward twice, you’ll perform a dash. If you do the same with the up button, you’ll perform a double jump. Also, keep in mind that you can perform air dashes and air blocks which are pretty handy in a duel.

Learning the basics of the game from the start gives you a solid foundation that you can then build upon on your way to the top.

Learn to Balance Offense and Defense

Right off the bat, let me clarify, Guilty Gear -STRIVE- is an attack-heavy game in that the core game mechanics and everything favors a player who attacks. However, this does not mean that defense is unnecessary or should be neglected.

Attacking moves are rewarded in this game, and an overly defensive style is punished. In terms of offense, the player must always be aware of their tension bar, which is located at the bottom (right or left-hand corner depending on what side you’re fighting on) of the screen. This bar works in the same way meter bars in other fighting games work. Therefore, you could call the tension bar the currency with which characters can pull off their overdrive, which is the equivalent of a super or an ultimate. With 50% of the tension bar, you can do an overdrive which means that with a full bar, you can do two overdrives. While the overdrive is cool, it is not the only way to damage an opponent, and smart use of your other buttons is just as effective. As mentioned earlier, there are five buttons you must become accustomed to which can be used to fight. That said, these buttons are transformative, depending on what situation you’re in. For instance, a kick will turn into a sweep when you use it in conjunction with the down button. So, it would be advisable to get a grip on these moves and when best to use them.

Defensively, GGST is a ‘back-to-block’ game which means that you simply have to press the back button to perform a block as opposed to some other games, which have another button designated to blocking. But that’s not all there is to blocking, as there are two other variations of blocking you must understand.

The ‘Just’ block is quite similar to the regular block, but it occurs when a player presses the back button just as they are about to be hit. What this does is that it negates the normal pushback that a regular block would have caused. Hence, when you perform a Just block, you’ll be able to continue pressuring your opponent as your light attacks will be able to reach with little to no problems.

The other type of block is the flawless one which creates a shield around you. To perform the move, you’ll need to press the back button but with two other buttons. This negates chip damage and also pushes the opponent back when they attack. So, you can use this to ease pressure and create some breathing space. But, you must be careful as this consumes the tension bar and cannot be maintained forever.

There is a lot more to offense and defense in GGST, but once you understand these basics, you should get by and improve even more.

So, Roman Cancels are a unique mechanic in the Guilty Gear series. When performed, they seem to slow time down to allow the user to use a variety of moves. As with most abilities, it costs meter to pull off. Interestingly, Guilty Gear -STRIVE- has perhaps the most intricate Roman Cancels in the entire series, and there are four of them. We’ll look at each type of Roman Cancel below.

This is an RC that is suited for offensive play. Once performed, the character can go into a devastating combo sequence to defeat the enemy and deal damage. The red Roman Cancel is great because of its comeback potential and is perhaps the most commonly used RC in the game.

This is a ‘neutral’ Roman Cancel. When activated, it doesn’t seem to do anything. What it does, in fact, is it slows the opponent down, and this can be used as both an offensive and defensive option. So, if an opponent wants to jump or hit you, the Blue RC slows them down, allowing you a bit more time to do something about their offense.

This isn’t one you see much, but it has so much potential that in the right hands, it is total carnage. The purple Roman Cancel allows you to cancel out of a special move and do whatever you want. So, imagine throwing a fireball and then performing the RC and hurtling towards the opponent to lay in pressure. This creates confusion for the opponent as they aren’t sure what comes next or how you will approach.

This is a purely defensive RC. When performed, it interrupts the opponent, which gives you a little space to react. With so many other defensive options, you might not see a lot of yellow RCs, but if needed, it is a great tool to use against an advancing opponent.

So you’ve learned all these cool moves; what else do you need to get better? Well, the first thing to keep in mind is that in fighting games, even the best players in the world lose fairly regularly (just not as much as others), so you WILL lose, but what to remember is never to take a loss too much to heart. Instead, learn from it, get a training partner who can point out some of your flaws and work on them.

Finally, just have fun with the game. Pick different characters and see what unique tools they have and if they fit in with your philosophy. Guilty Gear -STRIVE- is such a fun game to play, and once you have gotten a handle on the basics, you’re in for a good time. That’s it for this guide, and while this is by no means all that GGST has to offer, I have provided enough information to get you up and running. Now go out there and actually play the game!